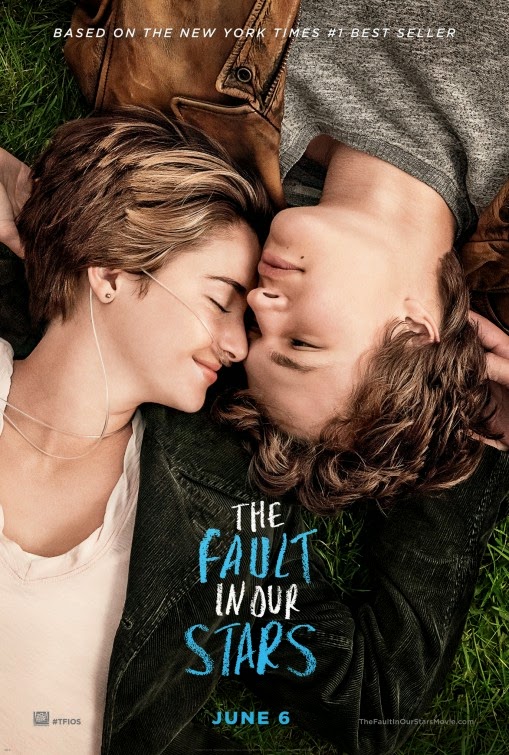 Cancer can be a foolproof way to pluck at moviegoers' heartstrings. It can also come off exploitative and eye-rollingly cynical. Unless it's treated with even the slighest bit of subtlety or nuance, the emotional manipulation is all too overtly phony to make the viewer feel moved or teary. "The Fault in Our Stars" could have resorted to all the rusty clichés and button-pushing of a maudlin disease-of-the-week telefilm, but instead, from a screenplay by Scott Neustadter and Michael H. Weber (who co-adapted another smart teenage romance with "The Spectacular Now") and sensitive direction by Josh Boone (2013's appealing, underseen "Stuck in Love"), it does not sentimentalize or gloss over the toughness of a potentially short life span. The film also wears its loving heart on its sleeve, offering the irresistibly sweet and exquisite young-adult coupling of rising stars Shailene Woodley and Ansel Elgort, and ends up ranking well within the same wing of 1983's "Terms of Endearment" and 2011's "50/50," two examples of very good tearjerkers. Yes, "The Fault in Our Stars" is that kind of special.

Well-read 16-year-old Hazel Grace Lancaster (Shailene Woodley) is out of lockstep with people her age. She was diagnosed with thyroid cancer at 13, until it spread to her lungs. Now, a fighter who can't breathe without a nasal tube connected to an oxygen tank, Hazel only attends a teenage cancer support group to keep her parents, Frannie (Laura Dern) and Michael (Sam Trammell), happy. It is there that she meets Augustus "Gus" Waters (Ansel Elgort), a facetious 18-year-old cancer survivor who accompanies his increasingly blind friend Isaac (Nat Wolff) and immediately links eyes with Hazel. Gus is in remission from osteosarcoma and has since kissed goodbye his high school basketball career after losing his leg, but he has an upbeat outlook on life. The two start off as friends, showing each other new things, like Hazel recommending to Gus her favorite book, "An Imperial Affliction," by her favorite author, Peter Van Houten (Willem Dafoe). But soon enough, Hazel loves Gus and they are each other's infinity, even if life is cut short in these teens' lives.

An adaptation of John Green's best-selling 2012 book, "The Fault of Our Stars" prides itself on being truthful and not sugar-coating anything from the first moment on. Movies often tend to rely on voice-over narration because the screenwriter knows no other way to tell the story. That isn't the case here, though, with Neustadter and Weber's literate, healthily humored script. Hazel's direct voice-over is wittily integrated, especially early on at her support group run by a guitar-strumming leader (stand-up comedian Mike Birbiglia) who has them meet "literally in the heart of Jesus," and more of an eloquent help than hindrance. Fortunately, the film delivers on its promise of cutting the bull by handling its characters with such respect, compassion and intelligence that, at times, it seems like a miracle. Never does the film pity or sanctify its dying characters, or strain for some false conflict. For the best of the film's length, the film coasts along on the relationship of Hazel and Gus without growing static or causing one to wait for the other shoe to drop. These two are brought together not because of cancer, but from sharing the same worldview that one should live life to the fullest. Both are smartly verbal characters with personalities, interests, and fears. The fact that Gus keeps a pack of cigarettes on hand to put a butt in his mouth as a metaphor ("You put the thing that does the killing right between your teeth, but you don't give it the power to kill you") could have felt gratingly precious, but it's understandable why he does it.

At only 22 years of age, Shailene Woodley is more than just "the next big thing" — she is everything. As Hazel, she is a rock and the grounding force for potentially sudsy material, keeping it touchy, mature, affecting, acerbic, identifiable and always true. She even sells a few of the source material's clunkier lines with her innate glow, naturalism and old-soul quality, always striking a beautiful balance between cynicism and the truth. As the very likable Gus, Ansel Elgort (who last played opposite Woodley as her brother in "Divergent") is charismatic and so darn adorable with an offbeat sense of humor. He makes Gus a total catch, even if he is written as flawless and too good to be true at first. However, in the grand scheme of things, their honeymoon phase is their infinity, and Woodley and Elgort are so effortlessly lovely together. Laura Dern and Sam Trammell wonderfully breathe genuine life into the roles of Hazel's supportive parents who are just protective enough and have learned how hard to push. The former, who can make anything better, gets one particularly moving flashback scene, where Frannie fears she wouldn't be a mother again if she lost Hazel. Nat Wolff, once again, proves to be a talent to watch as Gus' best friend Isaac, who starts going blind around the time his girlfriend dumps him. The actor has two funny scenes separately involving basketball trophies and eggs, but they feel too indulgent and out of place with the rest of the film. A prickly Willem Dafoe plays caustic, self-loathing author Peter Van Houten, who turns out to impress Hazel none too much when Gus takes her to Amsterdam to ask Van Houten how his book actually ends. Even the stunning Lotte Verbeek stands out as Van Houten's compassionate German assistant Lidewij.

Josh Boone seems to be a generous director who trusts his actors to bring emotional weight to a scene. Somehow, a moment where the teenage couple takes their friendship to the next level at the Anne Frank house in Amsterdam isn't made cloying or heavy-handed, despite the shameless use of "the slow clap." Even as we know Hazel and Gus are living lives with sooner-than-later expiration dates, "The Fault in Our Stars" is far from an egregiously downbeat bummer. Quixotic and attractively photographed, it's a weepie that is, against all odds, wise, finely acted and emotionally sound. If there is one fault with the film, it shouldn't have felt the need to oversell itself in its closing scenes, even with a poignant, gently done final shot, but the emotions always come from a real place, not from some pre-packaged teenybopper melodrama. "Pain demands to be felt," a key line in the film, rings true when you start to feel that lump in your throat and your tear ducts seem to be in working order. Both signs of feeling are actually well-earned.