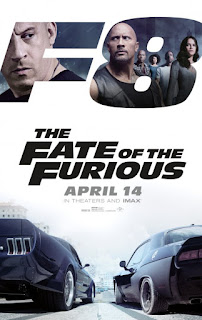 It took seven movies and the crushingly tragic real-life death of one of its leading stars for “The Fast and the Furious” franchise to actually reinvigorate itself and become the movies they should have always been: innately fun live-action cartoons with charisma and outlandish stunts. When these movies finally found a middle ground and tried being less self-serious and a little less earthbound without diving straight into outright parody, they improved with age and more absurdity. The small turnaround began with 2011’s “Fast Five,” but 2015’s “Furious 7” was easily the most favorable entry in the “Fast and the Furious” series. It was gleefully and exhilaratingly amped-up, as well as a poignant capper and tribute coinciding with the passing of Paul Walker. With that said, it’s 2017 and there’s still billions of dollars to be made and more cars to destroy for an eighth installment in this cash-cow franchise. “The Fate of the Furious”—OK, so the titles are just getting more nonsensical—doesn’t better the last, but it still meets one’s cravings with an acceptable brand of spectacularly dumb thrills that keep upping the ante.

Now without brother-from-another-mother Brian O’Conner and sister Mia—they’re retired and off raising their own family—Dom Toretto (Vin Diesel) and Letty (Michelle Rodriguez) are on their honeymoon in Cuba. Their second chance at happiness is interrupted when he is blackmailed into taking a job for cyber-terrorist Cipher (Charlize Theron), who requires something from him to put her grand agenda into place. When Luke Hobbs (Dwayne Johnson) calls back Dom and his team, including Letty, attractive computer hacker Ramsey (Nathalie Emmanuel), and class clowns Tej (Chris ‘Ludacris’ Bridges) and Roman (Tyrese Gibson), to steal an EMP bomb from Berlin, Dom is already in cahoots with Cipher and makes his act of double-crossing known, albeit not the reason why. From there, some members of the team have made the Top 10 Most Wanted List, but CIA fixer Mr. Nobody (Kurt Russell) and his new recruit, “Little Nobody” (Scott Eastwood), swoop in to corral them and earn an extra set of hands in foe Deckard Shaw (Jason Statham). Next up in New York City, where Cipher needs Dom to steal a briefcase of nuclear codes from the Russian Defense Minister, Hobbs and the team find a new base of operations and try to bring Dom back in.

Returning screenwriter Chris Morgan (who penned the previous five scripts) keeps plugging away,  trying to think up new directions to take this series without jumping the shark, while director F. Gary Gray (2015’s “Straight Outta Compton”) gets a piece of the pie and takes over for Justin Lin and James Wan. Neither one holds any pretension for what kind of movie they’re making, and they both know that there’s not much under the hood, just as Dom himself assures us the importance of who’s behind the wheel rather than what’s under that hood. Right off the top, “Fast and the Furious” fans get what they’re looking for: the title cards flying off the screen during aerial shots of Havana; up-skirt shots of booty-shaking chicks in pink thongs; and Dom doing a lot of macho posturing before racing his piece-of-junk car backwards right before the finish line while it’s on fire. As the plot proper gets underway, Dom is the one going rogue and turning on his family this time. It would seem like a switch has just been flipped, like Cipher has witch-like power over Dom, but although the viewer is kept in the dark before the unveiling, the reasons for his involvement are personal. These movies always have a McGuffin; if it’s not the Nightshade device, it’s nuclear codes because it's always about nuclear codes, right?

The action set-pieces are big and ridiculous, just as they should be, albeit sometimes too widely spaced for a 136-minute feature film that does a lot of globe-trotting (this team really gets around). There is an awesome, well-choreographed prison break with Hobbs and Shaw, the sequence entirely cued to electronica. With her team of hackers working hard, Cipher’s eyes fill with evil at her creation of complete chaos in the Manhattan streets by taking control of vehicles and unmanned “zombie cars,” and it’s a nutty sequence of puppet mastery. Finally, there is more gravity-defying fun in Vladain, Russia, on a frozen tundra. First, it’s used for Tyrese Gibson to cling to just the door of an orange Lamborghini as if he were water-tubing, and then has Hobbs steering one of Cipher’s unleashed torpedoes with his tree-trunk legs; all that’s missing is a wholly mammoth riding on top of the nuclear submarine.

With Paul Walker gone, the loss of his presence is still felt, but the cast acts as an ensemble—nay, family—again. Inside and out, Vin Diesel knows how to play family-minded patriarch Dom Toretto with a somewhat interesting wrinkle thrown in. After spending the last few films being an amnesiac and then a recovering amnesiac, Michelle Rodriguez is almost more affecting than the telenovela feel of Letty not knowing the person she loves. Tyrese Gibson and Chris ‘Ludacris’ Bridges are energetic comic relief as always, and Jason Statham’s Deckard Shaw gets to share a fun enemy-to-ally banter with Dwayne Johnson’s superhuman Hobbs. As for the newcomers, Scott Eastwood is a little bland but an easy-on-the-eyes addition, and Dame Helen Mirren classes things up with her couple of lark-ish scenes, having a cup of tea in a tavern. Growing blonde dreads after having no hair as the badass Furiosa in “Mad Max: Fury Road,” Charlize Theron’s Cipher is decidedly the most memorable of the villains in this particular series, especially for being played by an actress of this caliber. As Cipher, who equates herself to a baby-snatching crocodile at a watering hole, Theron is deliciously insane with ice water in her veins and the ability to give fierce side-eye, but it is a vastly underwritten part that mostly has the actress prattling on about choice theory and standing in the hacking control room of her private plane. That Cipher never actually gets behind the wheel of a car is a missed opportunity, too, and she really should have been given the chance to have a beatdown with Letty, but you can’t get everything you want.

Like Vin Diesel as an actor (and there’s nothing wrong with that), these movies have a limited skill set. When “The Fate of the Furious” is on the go and not getting into the weeds of its pedestrian plot, it fires on most cylinders. Aside from the film ending on a sweet note that proves Paul Walker's spirit will live on, there is too much time spent with someone mentioning the importance of family that it almost puts to shame Adam Sandler’s droning on about the same topic in most of his comedies. And, there are oversights with Deckard Shaw changing sides—forget that he murdered one of Dom’s own two movies ago—and the convenient, unexplained recovery of another villain. Forced humor with Hobbs turning out to be his daughter’s soccer coach actually has its pleasures, as does a whole sequence with a baby and Deckard. “The Fate of the Furious” is certainly needless, but no other popcorn-movie series right now can own a balance of inanity and insanity and make it fun. This installment does what it should and isn’t resting on the series’ laurels.