These Deals Were Made For Shooting: "Free Fire" a genre exercise that grows monotonous 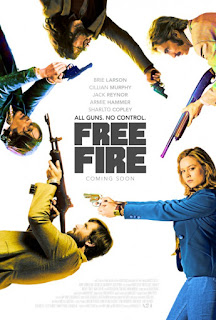 Profane banter. Lots of gunfire. John Denver music. In principle, “Free Fire” is the kind of tight, darkly fun low-budget genre exercise that cinephiles would eat up. The too-cool-for-school footprint made by anything Quentin Tarantino, particularly 1992’s “Reservoir Dogs,” is all over this blackly comic chamber piece about an arms deal gone wrong (read: a real-time, feature-length shootout), except that this one pales in practice. Not much more than a powder-keg situation, the film is narratively simple and unburdened by complexity. Writer-director Ben Wheatley (2012’s “Kill List,” 2013’s “Sightseers,” and 2016’s “High-Rise”) and wife/co-writer Amy Jump do carry a snarky, absurdist tone throughout here with the dynamic of his cast, so if there is anything congruous between "Free Fire" and the cult filmmaker's previous projects, it’s his specific sense of gallows humor. The fact that a bunch of mostly awful people end up nearly dead and/or caught is most likely the joke, and a cynical one at that, but that doesn’t mean it deserves a pass when the outcome is this sloppy and less clever than it thinks it is.

In 1978, two groups of characters meet in an abandoned Boston warehouse for a covert arms deal. Irish Republican Army rebels Chris (Cillian Murphy) and Frank (Michael Smiley) are buying, and Justine (Brie Larson) and Ord (Armie Hammer) are orchestrating the deal with their connections to the sellers, South African gun runner Vernon (Sharlto Copley) and partner Martin (Babou Ceesay). When Chris does not get what he ordered, finding AR-7s instead of his promised M-16s, both parties get off to the wrong foot. Tensions rise even more when the token dolt, Stevo (Sam Riley), recognizes Vernon’s driver, Harry (Jack Reynor), and has a big beef with him. One shot is fired, and then it’s mostly every man (and woman) for himself. Who could possibly be left standing?

Lasting only 90 minutes, "Free Fire" still feels overextended and never taut enough. Instead of escalating and kicking into high gear, it just becomes static and monotonous. The characters aren’t particularly engaging enough to endear the viewer or given enough attention before the gunfire to get to know them and become invested in whether they live or die. Really, they are less characters than they are chess pieces with busy mouths. Once introductions are out of the way and everyone is wounded, it’s a lot of shots being fired, ducking behind crates and cement blocks, and crawling around on the dirty floor. The sense of geography and where one is in relation to another in the space is never well-established that, for all we know, each character might as well be in a different warehouse. There is very little variety to any of the action, and the scope is limited and claustrophobic without aiding the tension. Even for an ultra-violent farce, the carnage lacks ingenuity, save for one’s character squishy demise against a van.

It has certainly been adeptly cast. Most of the actors get his and her day, adding color with snappy, albeit generally forgettable, bon mots, while being outfitted in ’70s clothing. Only a handful of the performances are noteworthy, however, including Armie Hammer, a hoot and impeccably dressed as Ord; Sharlto Copley, who brings a sexist, boorish charm and bravado as “international asshole” Vernon; and Brie Larson, if only because she elevates everything and her Justine is at least a little more sensible than the men.

Combining purposefully rough-and-tumble but not-very-stylish camerawork and Wheatley's increasingly muddled staging, the film never really cooks. Portishead’s Geoff Barrow and Ben Salisbury score is right on at least, as is a recurring saxophone flourish to their music score, and a sight gag involving a skeleton umbrella in the third act amuses. With really no one to cling to—maybe Justine because she’s the only woman and she’s played by Brie Larson, or maybe Armie Hammer because he’s so charismatic and handsome?—the grimly ironic punchline means nothing when it's all over. “Free Fire” seems like it has the necessary ingredients for a no-frills technical challenge, as if inspired by a stage play, but it ends up just being empty, pointless nihilism without being able to walk the walk or completely talk the talk.