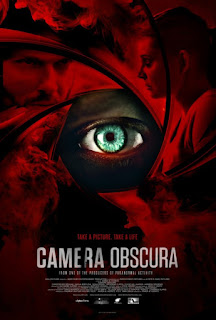 “Camera Obscura” could be summed up as, in the words of one character, “a weird episode of ‘Goosebumps’” mixed with a little “Jacob’s Ladder.” There is an interesting subtext in this Chiller Films release linked to a tortured post-war psyche that the film never fully explores through the humdinger premise it sets up. Graduating from shorts, debuting writer-director Aaron B. Koontz makes sure his plotting escalates, but it never takes off the way it should in feature-length form. Before losing all control and curtailing into a sub-“Maniac,” the final result feels like a special extended episode of a TV anthology series that isn't really worth finding out where it will go next. It needed a stronger script to go with its creepy gimmick.

Almost a year after shooting coverage in the Middle East for six months, war photographer Jack Zeller (Christopher Denham) suffers from post-traumatic stress disorder and blackouts. He’s still unemployed but seeing a psychiatrist and making progress, and supportive realtor fiancée Claire (Nadja Bobyleva) doesn’t mind giving him a little push. As an early anniversary gift, Claire also gives him a vintage camera and gets him a gig taking photos of real estate. When Jack has rolls of film developed, all of his photos come back in black and white and each one reveals an imminent death, like a dead little boy in a playground or a dead construction worker near a site. The bodies obviously weren’t there when Jack took the pictures, but as soon as he goes back to the location of each, he tries to stop the crimes. While he becomes a mystery hero in one case and saves someone, Claire then shows up dead in one of the photos. Even if Jack can save her once, a new bloodied fate may materialize. What’s a loving husband to do?

Heavy-handed when it should have been a little more subtle, “Camera Obscura” at least starts off craftily absorbing before botching the outcome. Despite Jack's investigation into a serial killer, writer-director Aaron B. Koontz and co-writer Cameron Burns admirably leave out a lot of explanation for what is causing Jack to see dead bodies in his photos and provoke the idea that PTSD could be driving him cuckoo. As Jack, Christopher Denham is a credible entry point into this strange scenario that holds him culpable and then turns him into an unreliable protagonist who keeps lying to his wife. Jack never once tries to get rid of the camera once he realizes the consequences, nor does he confide in Claire, but he does tell a homeless man. As much as he cares about saving his wife, the decision Jack makes to replace Claire with other dead bodies stretches credulity to the breaking point. Decent tension is at least generated through scenes of Jack killing someone, positioning their bodies in the same way as the photos, and then covering his tracks, only having to kill someone else.

“Camera Obscura” definitely has its effective moments—a scene of passion transforms into something that Elizabeth Bathory would get off to—and finds a little gallows humor when Jack fumbles to keep a man dead. The in medias res opening, set 11 days later, is also unnecessary and misguided, not adding anything but taking out the suspense of the protagonist’s trajectory. After beginning with a nugget of promise, though, it frustratingly leads to a pointless dead end and goes out with a whimper rather than a bang.