Badder Moms: "Fun Mom Dinner" never takes off to be that fun 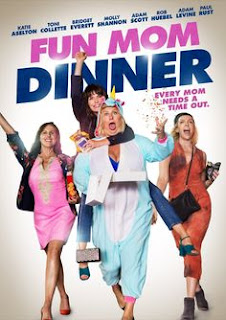 Female filmmakers need all the support they can get, but “Fun Mom Dinner” from debuting feature director Alethea Jones and screenwriter Julie Rudd (Paul Rudd’s wife) should be funnier and so much more fun than it gets to be. It has the dubious distinction of riding on the coattails of 2016’s crowd-pleasing “Bad Moms,” which deftly built honesty into a hilariously raunchy free-for-all, but there were so many possibilities for another film to fill the domain usually taken up by so many male-centric comedies. With only the smallest nuggets of truth and delivering no more than smiles, “Fun Mom Dinner” is inoffensive and flat most of the time.

Former lawyer turned stay-at-home mom Emily (Katie Aselton) craves “me time” and more attention from her husband, Tom (Adam Scott), who barely touches her anymore. Emily’s friend, Kate (Toni Collette), tries to get away from her four kids any chance she gets, locking herself in the bathroom to get high. At the pre-school  both Emily and Kate's kids attend, perky but divorced single mom Jamie (Molly Shannon), who records her entire life on social media, invites Emily on one of her regular “fun mom dinners” with Melanie (Bridget Everett), a safety-first school volunteer who runs the student drop-off. Even though Kate wants nothing to do with them, Emily tricks her into coming to the dinner that promises, “lots of wine, no kids.” As these four moms let their hair down with a night out on the town on a school night (!), they come to find out that they have more in common than they thought.

Sapped of anything wise or acerbic, “Fun Mom Dinner” feels like it’s always just getting started. It’s tame and all sorts of lame, wavering between sincerity and rowdy antics with a very light R-rating. There are amusing ideas that don’t really go anywhere, like what if the moms snuck a joint in a restaurant restroom, only to trigger the sprinklers and a dine and dash, and then made a late-night stop at Walgreens? The ladies singing karaoke, specifically “99 Luftballoons” in German, is also more humorous in theory than follow-through by just petering out. A late scene on a marina dock also has some unrealistic blocking, as the women and their DD (Paul Rust) decide to stand at the start of the dock as they watch Melanie, dressed in a unicorn onesie, dive off the end of the dock to swim to a boat. Finally, the scenes with the dads—Tom and Kate’s husband Andrew (Rob Huebel) get locked out of Andrew’s house while watching the kids—never gain any momentum and just pad the already-short running time.

Katie Aselton, Toni Collette, Molly Shannon, and Bridget Everett are fun to watch together, but one can’t help wish that the script gave them all more to do than navigate clichéd character arcs. For instance, the tension between Collette’s Kate and Everett’s Melanie gets such an easy fix, and the viewer doesn’t really get a sense of the friction between them to begin with. Because any film like this needs a wild card, outrageously brash comedian Everett is up to the job, and she has a very specific comedic daring that earns a few mild chuckles here. A lot of familiar faces put in favors to the filmmakers, too, including the co-writer’s husband, Paul Rudd, who serves as a producer and cameos as a Jewish marijuana connoisseur with his partner (David Wain). Even Adam Levine comes in as a handsome bar owner who flirts with Emily after showing her his “Moms” tattoo (he has two moms), but it’s mainly a thankless role that doesn’t give him a lot to work with, except be a potential “other man” to light a married woman’s fire.

At the end of this “fun mom dinner,” moms learn to stick together, sure, but the journey doesn’t even get to be the destination. The film culminates in three of the moms going on the hunt to find Emily who went off with the hot bartender, and there’s the contrived misplacement of a cell phone and a wrong boat encounter. There is a Jake Ryan throughline, as in John Hughes’ “Sixteen Candles,” that’s cute but not earned in terms of Emily and Tom’s marital rough patch. The situations should have been crazier, the insights could have been more fresh, and the dialogue needed to be punched up. At least director Alethea Jones bought the rights for an ear-pleasing 1980s soundtrack that includes “Head Over Heels” by The Go-Go’s, “Town Called Malice” by The Jam, “Whoa! The Cops” by Stupid Fresh, and "If You Were Here" by Thompson Twins. Slight and bland when it should be sharp and raucous, “Fun Mom Dinner” is benign viewing with a cast more than willing to cut loose but saddled with material that lets them down. It’s just kind of there rather than bad, so one can’t exactly find any glee in ripping it apart.