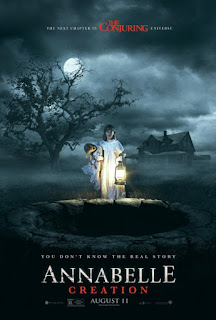 It’s official: more than just superhero movies are becoming part of a larger cinematic universe. “Annabelle: Creation” is a prequel to 2014’s “Annabelle,” itself a prequel spin-off of 2013's “The Conjuring,” and lays the groundwork for its own shared universe. While the announcement of another origin story for the apple-cheeked porcelain terror sounded like it would be a needless cash-grab, rushed into production based on the last film being a hit with the public, expectations perked up when the project was entrusted to director David F. Sandberg, who made one’s fear of the dark scary again with 2016’s “Lights Out.” Three years later, the finished product itself puts all naysayers in their place, having been crafted with actual care and know-how. Conjuring up a variety of new tricks to upstage the scare tactics of its predecessor, “Annabelle: Creation” is such a solidly familiar fright machine that, following 2015’s “The Conjuring 2” and 2016’s “Ouija: Origin of Evil,” exists as a rare example of how to do a canonical scare picture right.

Twelve years after the tragic death of their daughter Bee (Samara Lee), dollmaker Samuel Mullins (Anthony LaPaglia) and wife Esther (Miranda Otto) have agreed to take in six orphaned girls and Sister Charlotte (Stephanie Sigman). Despite the couple’s farmhouse being in need of repairs like their lives, it’s as big as a home as the girls have ever seen. Janice (Talitha Bateman) and Linda (Lulu Wilson), the youngest of the girls, are inseparable, promising each other that they would never give up the other if adopted; in the house, they find a bedroom to share, but the polio-suffering Janice is stuck in the house most days. As is always the case in a creaky house, there is a locked bedroom that Samuel forbids, and eventually, Janice wanders into that room to find a key to a closet, where doll Annabelle sits. Once the evil entity using Annabelle as a conduit is unleashed, it takes hold of Janice and threatens everyone else in this makeshift orphanage.

In keeping with the classical vein of James Wan’s “The Conjuring,” the 1955-set “Annabelle: Creation” is old-fashioned in spirit but still alive in delivering a reliable brand of jack-in-the-box jolts that make horror movies a creepily fun communal experience. It takes the right filmmaker to make jump scares still feel hair-raising and exciting, and director David F. Sandberg definitely has a skillful hand for doing just that. His deliberate pacing instills a benevolent comfort in the orphan girls’ safety before tearing them down. Rest assured, Sandberg grabs the audience by their throats and does not let them rest easy. From a dumbwaiter, to a late-night telling of ghost stories under a bedsheet, to a ringing bell, to a scarecrow in a barn, to a motorized stairlift ride in the middle of the night, to a tea party from hell, Sandberg knows how to milk each set-piece with devilishly taut dread, inventive technical style, and a fearsome sound design. The director, who expanded his short to a feature with “Lights Out,” actually makes two nods to “Attic Panic,” another short he made, with light bulbs that unscrew on their own and a ghostly white bedsheet.

David F. Sandberg is well aware that a scare picture can be empty without strong characters to root for, and he manages to wring credible, sympathetic performances out of his cast. As Janice and Linda, Talitha Bateman (2016's "Nine Lives") and Lulu Wilson take turns playing the leads here and both are intuitive performers as such young ages. Wilson, who played the possessed Doris in “Ouija: Origin of Evil,” gets to play the voice of reason here as Linda, who knows when to exit the forbidden room, when to run, and when to be resourceful with a toy pop gun. Anthony LaPaglia manages to mix intimidation and grief as Samuel, and despite being sidelined for most of the film, Miranda Otto dials it down as grieving wife Esther, who spends her life in a bed with a mask and is seen almost as a phantom whom a few of the girls fear.

Narratively, the screenplay, credited to the first film's returning screenwriter Gary Dauberman, doesn’t break any new ground, nor does it have to when there is so much skill on display. These characters haven’t seen many horror movies, so they don’t always listen to audience members about not entering a closet they shouldn’t hide in or not sticking their head into the darkness of a well at night, but it’s forgiven because we wouldn’t have much of a movie otherwise. In telling the genesis of the demonic doll, the film later ends with an epilogue that nicely ties in with “Annabelle,” although those coming into this film without viewing that one can forget it. There is also a subtly spooky tease for what's to come in 2018's “The Nun,” a spin-off of "The Conjuring 2" in Warner Bros.' pipeline. When “Annabelle: Creation” really works, it works as a fiendishly effective seat-pouncer.