The Neeson Express: "The Commuter" fun and amusingly preposterous before going off the rails 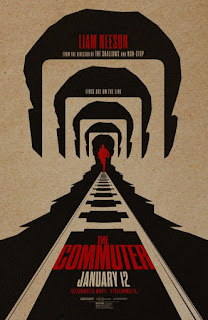 Practically a genre unto itself, the reliable collaborative efforts of actor Liam Neeson and director Jaume Collet-Serra (2016’s “The Shallows”) have resulted in three slickly executed B-level action thrillers (2011’s “Unknown,” 2014’s “Non-Stop” and “2015’s “Run All Night”) for Neeson’s post-“Taken” career as a late-blooming action star. The tradition continues with “The Commuter,” an almost-Hitchcockian wronged-man yarn on a train that nearly apes the formula of the airplane-set “Non-Stop" but keeps up the fun for its first two acts before jumping the rails. By the standards raised by Collet-Serra, it is pretty disposable but still amusingly preposterous.

Formerly a cop with the NYPD, 60-year-old Michael MacCauley (Liam Neeson) has worked as an insurance salesman for the past 10 years to support his wife, Karen (Elizabeth McGovern), and their college-bound son, Danny (Dean-Charles Chapman). Five days a week, he takes a commuter train every morning from the suburbs of Tarrytown, New York to Grand Central Terminal and back. One seemingly normal work day, Michael is fired with severance pay, just five years short of retirement, and on his commute back home, a woman named Joanna (Vera Farmiga) strikes up a conversation that will leave him making the biggest decision of his life. Purporting to be an expert in human behavior, Joanna asks him a hypothetical question for an experiment that then becomes a proposition: if he can identify a passenger on the train who doesn’t belong—by now, Michael knows a lot of the familiar faces on his daily commute—and is carrying a bag with something her associates need, the $75,000 that’s stashed away in one of the train’s restroom compartments is his. If Michael doesn’t comply before the end of the line in Cold Spring, his wife and son will be killed.

Moving like a bullet, “The Commuter” is involving for a long time, as long as one bears in mind that very few of the plot developments hold water. The shrewdly edited opening montage draws the viewer into Michael’s day-to-day grind, efficiently establishing the monotonous repetition with slight tweaks up until the mundanity is ripped out of his life. As contrived as it all is—Joanna is apparently omniscient with an eye on Michael’s every move and even has the cell phone number of another regular commuter—the film depends on one just accepting such loopy logic and going along for the ride. With a film like this, a surfeit of red herrings abounds, as the viewer tries deciding who the odd passenger out might be before Michael does. There are moments of taut suspense, like when Michael hides underneath the train but must remain on it or kiss his family goodbye, and as one comes to expect by now, there are a couple of well-choreographed scenes of fisticuffs between Neeson and other male passengers, especially one fight (shot as a faux single take) in an empty train car over the seats and through the glass with a guitar used as a weapon. More so than Kenneth Branagh did with his 2017 incarnation of “Murder on the Orient Express,” Collet-Serra effectively takes full advantage of the cramped space within the train, his camera sleekly dollying back from train car to car with digital trickery and even through the punched holes of the ride tickets, reminiscent of the impossibly stylish camera movements in David Fincher's "Panic Room."

Liam Neeson is committed and in watchably fine form as usual in a role that Harrison Ford might have played back in the 1990s. A similar character in his wheelhouse, Neeson’s Michael is a family man who needs the money, having refinanced his house after the 2008 housing bubble, but wants to do the right thing and still acts with a moral compass in carrying out his task. Also, as most of Neeson’s characters do, Michael has a very particular set of skills, having been a cop, in his process of deduction, but as a man nearing retirement, he takes as many punches as he gives them. Vera Farmiga enhances every film she’s in, and even as mysterious puppet master Joanna who eventually becomes a voice on the phone, she still brings a cunning to her use of the words, “one little thing.” The remainder of the cast does what is minimally asked of them, but it does include the likes of Patrick Wilson, Sam Neill, Jonathan Banks, Elizabeth McGovern, and Andy Nyman.

Instead of trusting the simplicity of their premise and the morality that it entails, screenwriters Byron Willinger & Philip de Blasi and Ryan Engle (2014’s “Non-Stop”) eventually throw in a few more winding complications involving a conspiracy and one of the passengers being a witness to a city planner’s suicide (or was it murder?) to follow through on the film's socioeconomic, screw-the-rich subtext. Once the train literally derails—and, boy, does it derail in cartoonish but awesome fashion—the film morphs into a more routine action vehicle with backloaded exposition and a double-crossing seen coming a few stops before, thanks to a certain casting choice. By then, one realizes all of the film’s cards have already been played and the forgone conclusion is set. What “The Commuter” sets up is so intriguing that it’s a shame the rest of it pushes its luck and ends up being only passably diverting.