And Many More: "Happy Death Day 2U" a superior sequel that's just as fun and ups the ante and pathos 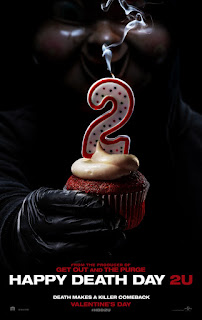 2017’s “Happy Death Day” was cleverly imagined as “Groundhog Day” with a whodunit slasher spin, and the result was cheeky, fresh, and a lot of fun, much like its sequel. The déjà vu is intentional again with “Happy Death Day 2U,” a sequel that seemingly shouldn’t exist or work and could have easily felt like a lazy, slapdash cash-in rushed into production to be released only 16 months later. While the film repeats itself by design, returning director Christopher Landon (who also co-wrote the script) avoids the easy pitfall of making the same movie twice and being too cute by a half. This time name-checking “Back to the Future Part II” (another movie its protagonist has never heard of), “Happy Death Day 2U” is funnier and just as breathlessly entertaining with a more sci-fi flavor and even more surprising pathos. It is ambitious and busier than its lean predecessor, but it might even be superior by upping the ante and deepening its characters.

The story opens shortly after the end of “Happy Death Day,” finding Tree Gelbman (Jessica Rothe) and Carter (Israel Broussard) happily canoodling in Carter’s dorm room just as roommate Ryan (Phi Vu) barges in, having experienced a case of déjà vu like Tree, right down to being murdered by someone in their Bayfield University’s Babies mascot mask. Tree knows a thing or two about dying eleven times and tries to help before she herself relives her birthday, September 18th, all over again. When she discovers the quantum reactor that Ryan and two other science nerds, Samar (Suraj Sharma) and Dre (Sarah Yarkin), created was the cause of her time loop, Tree gets sent into an alternate dimension, where everything is different: Carter is no longer her boyfriend but actually dating snarky sorority president Danielle (Rachel Matthews); Tree’s mother (Missy Yager) is still alive; and there is someone new behind that creepy baby mask.

"Happy Death Day 2U" is a little less concerned with its slasher-centric plot than before, although a few set-pieces still manage to be suspenseful; in one case, Tree and Lori must enter an under-construction wing of the hospital to evade the killer. In another tonal high-wire act, director Christopher Landon expertly seesaws between absurdist comedy, poppy horror, an affecting emotional core, and crazy time looping, while raising the emotional stakes. By unveiling the answer to why Tree was stuck in a time loop, the film goes full-bore sci-fi and it's the most ideal direction this story could go. In a few small but amusingly savvy throwaway touches, Ryan asks why their university would ever choose a creepy baby as their mascot, and in another instance, Tree wonders what Carter is always looking for under his desk when she wakes up every time in his dorm.

A breakout star right out of the gate, Jessica Rothe is such a charismatic performer with tip-top comedic timing, while handling the dramatic challenge of making Tree sympathetic and organically making her come to terms with her grief. Like before, Rothe sells every facet of Tree’s situation and personal growth, her emotional conundrum feeling real and her furious aggravation hilarious, as she stomps through the campus grounds yet again, now with Carter and Ryan in tow. Also, there is another very funny montage that goes through the many ways Tree dies, from downing toxic cleaner to skydiving in her underwear without a parachute. Though not much time has passed, Landon was also lucky to get the entire original cast to return, including extremely supporting characters. Rachel Matthews even gets to be a true scene-stealer, bringing a sweeter, more generous side to Danielle, who uses her thespian talents to play a blind French student as a distraction to comedically pleasing effect. “Happy Death Day 2U” never seems like it means to be frightening, but it’s so much fun and emotionally involving, the kind of crowd-pleaser that audiences will want to experience on a loop.