Keeping it in the Ring: "Fighting with My Family" a warm, funny winner even for the wrestling-averse viewer 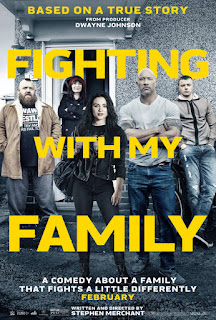 When a movie centered around a subject that one has zero interest in (i.e. pro wrestling) can entertain and make the viewer care through and through, it has to be doing something right. So it goes with “Fighting with My Family,” a thoroughly engaging underdog sports saga that gives World Wrestling Entertainment superstar Paige the fictionalized biographical treatment, itself inspired by a 2012 hour-long British documentary special “The Wrestlers: Fighting with My Family.” Written and directed by Stephen Merchant (co-creator of TV’s “The Office”), the film sports sharp humor, humane sensitivity, and a little insight into the professional world of WWE and the over-the-top pageantry that comes with it, along with a winning lead performance by rising star Florence Pugh (2017’s “Lady Macbeth”). Leaving skepticism and all preconceived notions at the door, “Fighting with My Family” will surprise as an early-2019 gem that won’t require wrestling-averse audiences to know Big Show from Sheamus.

Born with wrestling in her blood in Norwich, England, scrappy 18-year-old Saraya-Jade Bevis (Florence Pugh) has always dreamed of joining the WWE one day and now goes by the moniker “Paige” (Rose McGowan’s Paige on TV’s “Charmed” is her favorite character). Having been trained by their working-class parents, ex-con Patrick “Rowdy Ricky Knight” (Nick Frost) and Julia “Sweet Saraya” (Lena Headey), she and older brother Zak “Zodiac” (Jack Lowden) know every move in the ring, and together as a family, they run a local wrestling gym for troubled youths and manage an indie wrestling league in their close-knit community. Both Paige and Zak get their breakout chance when they’re invited to try out for WWE talent scout and coach Hutch Morgan (Vince Vaughn) in London. Tensions arise between siblings when Paige only makes the cut to train in the WWE’s NXT boot camp. When Paige gets to Orlando, she learns how hard the training really is and that her Hot Topic-attired oddball image might not exactly be the typical WWE brand, feeling overmatched yet insecure by other trainees who are blonde, sun-tanned models and cheerleaders. As Zak deals with his dashed dreams and the reality of having a newborn baby with his girlfriend back home, Paige will have to persevere if she wants to make it to the big time.

Writer-director Stephen Merchant establishes the family dynamics so well, presenting the tatted, buzz-cut mohawked Patrick and the pink-haired, lip-pierced Julia as loving, brashly funny parents, and it helps that Nick Frost and Lena Headey are so perfectly cast and provide part of the film’s levity. Merchant, who wouldn’t seem like an obvious choice for the material, brings a specificity to this Norwich family and their devoted love for each other, as well as for wrestling, and takes the sport as seriously as the characters do. Fierce but accessible, Florence Pugh makes Paige easy to warm up to with a quick sense of humor and a vulnerability underneath her hard-edged, seemingly unapproachable exterior, and it’s a thrill to watch the character refuse to quit and grow more confident, pushback and nerves be damned, until her victorious debut in the ring. Jack Lowden (2018's "Mary Queen of Scots") is equally strong and understated as Zak; though the focus is on Paige, the narrative doesn’t forget about the rejected-turned-resentful Zak, whose goals are thwarted for not having the spark that his sister does, and gives the subplot emotional heft. Also, Vince Vaughn is effective in acerbic mode as coach Hutch Morgan; Dwayne Johnson (who produced the project) appears as his magnetic, charismatic self in a few scenes with flashes of his eyebrow-raising “The Rock” persona; and Merchant casts himself and the hilarious Julia Davis (HBO’s “Sally4Ever”) as Zak’s girlfriend’s straight-laced parents who loosen up by the end.

“Fighting with My Family” isn’t immune to hitting the predictably routed notes of any rags-to-riches story, but it’s not exactly a fatal deal-breaker when a well-trodden sports formula is executed this well and upends expectations with certain characters Paige meets along the way. Culminating with Paige’s debut at WrestleMania, where she became history’s youngest Divas champion in 2014, there is an aspirational quality that should resonate with anyone pursuing their dream of choice. Again, rest assured, one does not have to know anything about pro wrestling or even be a fan of it to get something out of “Fighting with My Family.” Unsuspectingly touching and definitely a clap-worthy crowd-pleaser, it is sure to be a sleeper hit that will convert the uninitiated to gain a newfound appreciation for the “fixed,” albeit not fake, sport.