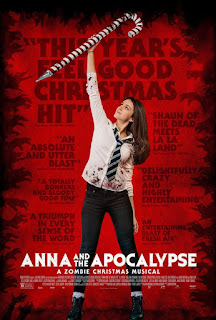 Intersecting a multitude of disparate genres on the Venn diagram, “Anna and the Apocalypse” is a Scottish “High School Musical” set around Christmas with zombies coming to town. It’s alternately toe-tapping, cheeky, bloody, and surprisingly touching. Based on the late Ryan McHenry’s 2011 short “Zombie Musical,” the film is lovingly made with humble means by director John McPhail and screenwriters Alan McDonald and McHenry, refusing to stodgily remain in one lane and adeptly criss-crossing a coming-of-age high school dramedy, a zombie horror picture, and a full-blown musical. Alive with a sincere, scrappy "let's-put-on-a-show" enthusiasm that proves infectious, “Anna and the Apocalypse” is one exuberantly inspired genre-buster that will be wonderful for any time of the year.

Leading a spirited ensemble, newcomer Ella Hunt is sympathetic with an appealing mix of charm, edge, and pluck as Anna, a high school senior who plans to live in Australia for a year instead of going straight to university, much to the chagrin of her widowed janitor father (Mark Benton). Until then, she’s just trying to get through the school day, as are classmates John (Malcolm Cumming), Anna’s adorably sweet, torch-carrying best friend; lesbian newspaper editor Steph (Sarah Swire), who wants to make a difference at a soup kitchen while her parents are in Mexico without her for the holidays; Lisa (Marli Siu), Anna’s happily-in-love friend who’s excited about putting on the school’s Christmas show; and videographer Chris (Christopher Leveaux), Lisa’s boyfriend who needs to find his creative voice to pass a class. Little do they all know that their small Scotland town of Little Haven has become threatened by a lethal flu-like virus that’s turning everyone into a flesh-eater. When four of them are holed up in the bowling alley where Anna and John work, they must dodge the zombies and make their way across town to their loved ones who are barricaded in their high school with tyrannical headmaster Mr. Savage (Paul Kaye).

The enormously likable “Anna and the Apocalypse” has all the trimmings of a cult favorite: zombie carnage, memorable characters, and song-and-dance numbers. While the film isn’t necessarily scary, it is merrily blood-splattered—Anna uses a razor-sharp candy cane decoration and a seesaw at one point to slay a couple zombies, and an undead head gets fed through the bowling alley’s ball return—and dread-inducing in spots, like when our group of characters must take a shortcut through a darkly lit Christmas tree emporium. Making even more of a poignant impact, there are actual stakes by having endearing, distinctly drawn characters to root for, and not everyone makes it out without a bite. Catchy and full of yearning, the songs by writers Roddy Hart and Tommy Reilly manage to develop the characters in their respective crises before the zombie outbreak and push the story forward, beginning with the melancholy-tinged “Break Away.” And, without ever looking overly slick or rehearsed the night before, the small-scale musical numbers are often stirring and joyfully choreographed.

As bloody entertaining and song-happy as it is, "Anna and the Apocalypse" isn't afraid of having a bittersweet undercurrent to match the apocalyptic setting and the end of lives (both young and old), pushing it above being a frothy lark. It's never a downer, though, and how could it be? The instantly hummable cafeteria-set “Hollywood Ending” is the most unapologetically peppy bursting-into-song show-stopper about how reality disappoints and doesn’t match up with cinematic romances; Lisa’s “It’s That Time of Year” is a naughty riff on “Santa Baby” at the Christmas show; and “Turning My Life Around” is another upbeat standout, following an earbud-wearing Anna as she leaves her house to walk to school, oblivious to the zombie mayhem happening around her (perhaps a nod to another genre-smasher, "Shaun of the Dead"). As a dream project that co-writer Ryan McHenry (who tragically died of bone cancer) never got to see come to fruition and was made in his memory, “Anna and the Apocalypse” would have made him very proud. It deserves to become a musical staple that one will want to watch not solely around Christmastime.