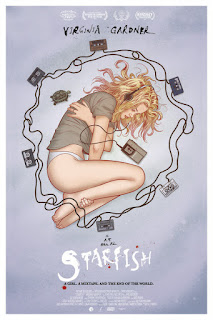 Loss, grief, and isolation can feel like the end of the world, and in “Starfish,” the end of the world is not just a metaphor. Without simplifying A.T. White’s writing-directing debut, the easiest way to describe the film is to imagine Netflix series “13 Reasons Why” as a surreal, meditative cosmic drama, à la Lars von Trier’s “Melancholia,” albeit with alien creatures and an indie-rock soundtrack. White (who also serves as his own editor, composer, and co-creature designer) intermittently provides a visual grandiosity usually reserved for big-budget sci-fi tentpoles, but what really works here is the forlorn intimacy and quietly affecting quality the film achieves. “Starfish” is more impressionistic than it is straightforward storytelling, not so much telling an A-to-B narrative as it is evoking a vivid feeling. As a dreamy, unhurriedly paced tone poem and a directorial calling card, it’s certainly unusual, ambitious, and deeply personal.

After the funeral of her best friend Grace (Christina Masterson) on New Year’s Eve, radio deejay Aubrey Parker (Virginia Gardner) is in such a state of devastation that she can't even find works. She walks back to Grace’s apartment, goes through her thrift-shop things and feeds her pet turtle and jellyfish, and then falls asleep. When Aubrey wakes up to a chill, she realizes there is no heat or electricity and that she could be the last one in the isolated, snow-capped town, ravaged by alien creatures. It’s the end of the world as Aubrey knows it, but with the help from a man’s voice over Grace’s CB radio, she finds a cassette tape labeled “THIS MIXTAPE WILL SAVE THE WORLD,” which is the first of seven that Grace has hidden around the town where the friends used to go. Venturing out, Aubrey assumes that she must follow her late friend’s clues in order to stop the signal transmission that has opened a door for these alien monsters to come to Earth and bring about an apocalypse. If Aubrey chooses to ignore it, will the world still exist?

Virginia Gardner (who made a memorable impression in 2018’s “Halloween”) pulls off emotionally honest work as Aubrey Parker, taking on the challenge of carrying the film on her own. Aubrey keeps seeing a man from her past, now with his face bloodied and hollowed-out, and herself on a beach at night, and her guilt becomes clearer as she goes deeper down the rabbit hole. Almost as abstract as a mind-bender by Shane Carruth but more emotional, “Starfish” marches to the beat of its own drummer with a poetic, elegiac visual language. The viewer must let most of what happens wash over them, like an anime sequence or a dip into meta territory when Aubrey wakes up on a movie set, spotting actress Virginia Gardner and director A.T. White. When Aubrey finally realizes the consequences, the film sneaks up on you and reaches a cumulative poignancy that’s fraught with a rush of melancholic emotion, cued to Sigur Rós’s ethereal, haunting ”Ekki múkk.” It’s important to rally behind first-time filmmakers with exciting voices, and A.T. White is bound to be heard.