As Above, So Below: "Us" a tense, spectacularly weird, next-level work of twisted genius with plenty to discover and debate 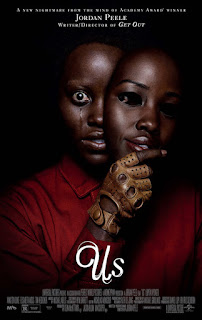 After writing and directing only his first feature that became a water-cooler hit and won him an Oscar for Best Original Screenplay, is it premature to consider Jordan Peele a modern master of horror? Maybe not. Peele tore out of the gate with 2017’s inventively creepy, socially relevant “Get Out,” announcing himself as a clear, exciting voice that tucked sharp social commentary into the skin of a horror film. Despite the pressure to live up to that debut, the filmmaker sidesteps the sophomore slump with his second film “Us.” There will be the temptation to compare “Us” with “Get Out,” but it would be a complete disservice to both films since both have different stories to tell and different thematic aims. Like Peele’s first film, “Us” exists in a reality with a heightened, through-the-looking-glass skewed logic, and also like “Get Out,” “Us” works on two different levels: it’s a bold, entertaining horror film on the surface and it also has more on its mind with so many haunting, thoughtful secrets to unpack and chew on after letting it marinate in the mind.

Adelaide Wilson (Lupita Nyong’o), husband Gabe (Winston Duke), and children Zora (Shahadi Wright Joseph) and Jason (Evan Alex) are taking a vacation to Santa Cruz at their summer home. At first, Adelaide refuses to meet their friends, Kitty (Elisabeth Moss) and Josh Tyler (Tim Heidecker) and their twin daughters Becca (Cali Sheldon) and Lindsey (Noelle Sheldon), at the beach because it reminds her of a childhood trauma in 1986 when she wandered off the boardwalk into a beachfront funhouse of mirrors. On their way there, strange coincidences begin to match up, giving Adelaide a sense of foreboding and concern, and then Jason temporarily goes missing. Later that night, as Adelaide is telling Gabe that she’s feeling unsafe like a dark cloud is hovering over her, Jason interrupts to tell them that a family is standing in their driveway. It’s a family, all in red jumpsuits, that looks exactly like the Wilsons. Who are they and what do they want?

Breathlessly tense, spectacularly weird, and metaphorically rich, “Us” is like experiencing a lucid nightmare, a next-level, wildly envisioned work of twisted genius. Following a 1986-set opening on the Santa Cruz boardwalk that shrewdly plays with expectations and dodges the crutch of employing a jump scare, the film immediately builds empathy around the Wilson family—here, the fact that the family we are following is African-American doesn’t seem to be a statement on race, just a welcome, revolutionary step in on-screen representation—and then boils over with dread on a personal, seemingly isolated scale. The supremely creepy home invasion is just the beginning, as writer-director Jordan Peele has a lot to say between the lines, exploring what it means to be human, the divide of America, the haves and the have-nots, and nature vs. nurture, while favoring ambiguity over cut-and-dried answers.

Lupita Nyong’o (2018’s “Black Panther”) is nothing short of astonishing in dual roles, blurring the line between protagonist and antagonist as the fiercely protective Adelaide and angry doppelgänger Red. Nyong’o is such an engaging and nuanced performer that the camera hangs on every emotion she palpably feels and every word she speaks. It seems like daunting work to play a tethered reflection of Adelaide's reflection as Red with changes that are both physical and vocal, but Nyong'o is tremendous in her commitment and versatility. Like Nyong’o, each cast member (not only in the Wilson family) gets to play a feral, malevolent double, and each of them are effective. Winston Duke (2018’s “Black Panther”) is likably goofy as Gabe, the corny dad who tries to be hip and keep up with the Tylers by buying a boat on the cheap. Shahadi Wright Joseph and Evan Alex are terrific as teenage athlete Zora and pre-teen Jason, who get their moments to shine, particularly when they are quick to turn to violence and compare their death counts. Also worth mentioning: Elisabeth Moss (2015’s “Queen of Earth”) and Tim Heidecker (2018’s “Flower”) both make a major impression as bickering, afternoon-drinking, bitterly unhappy couple Kitty and Josh, particularly in one of the film’s most startling set-pieces.

Nervy, challenging, genuinely unsettling, and unexpectedly poignant, “Us” is a thinking-person’s horror film that respects the intelligence of both its characters and the audience. Jordan Peele is precise and deceptively multilayered in his construction, dealing out clues and totem imagery of rabbits, scissors, people linking hands for the noble failure of benefit campaign Hands Across America and the Biblical verse Jeremiah 11:11 before his grand reveals, and an expert of tone, slicing humor through the horror without ever taking a wrong step. Every facet of production is working on the highest level, Mike Gioulakis’ cinematography dynamic with a flair for measured pull-outs and a 360-degree pan, and Michael Abels’ score a chilling harbinger of menace, including a children's choir over drum beats and chimes lending serious “The Omen” vibes during the opening credits sequence. The uses of Luniz’s hip-hop hit “I Got 5 on It,” The Beach Boys’ “Good Vibrations,” and NWA’s “Fuck the Police” are all memorable, too. The ultimate beauty of “Us” is that it is so dense with subtext and details, leaving plenty to discuss and debate voraciously. Inspiring so many interpretative What It All Means theories and rewarding viewers with new discoveries on repeat viewings, this is exactly the kind of ambitious, fascinating horror film that the world needs.