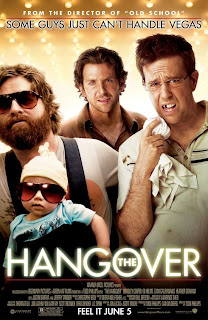 "Old School"/"Road Trip" director Todd Phillips' what-happens-in-Vegas romp celebrates bromance and what-the-hell-happened-last-night regrets. Think "Dude, Where's My Car?" mixed with "Very Bad Things," shaken and stirred, but instead it's “Dude, Where's My Groom?” and it's a pretty good thing. Here, you have "The Hangover," a rude, crude, outlandish, very R-rated comedy that's not obnoxious or persistently hilarious but very funny when it wants to be.

Three groomsmen—smarmy school teacher Phil (Bradley Cooper), insecure, henpecked dentist Stu (Ed Helms), and Alan (Zach Galifianakis), the weird brother of the bride—road trip it from Los Angeles to the Sin City for some good times, but the morning after they end up losing their soon-to-be-wed bud, Doug (Justin Bartha). Ed wakes up with his front incisor missing; and there's a tiger in the bathroom, and a baby in a closet. They nurse their pounding heads from their, uh, hangovers and try retracing their steps, but have little to no memory of the night before. It must've been a wild party.

"The Hangover" is cleverly scripted, well-cast, and scattered with a lot of occasionally inspired laughs, although the reveal of where Doug is the entire time is sadly a shrug of indifference. Screenwriters Jon Lucas and Scott Moore offer up some wild and wacky misadventures for the guys, and it's fun figuring out the night before with them, but a few of the violent/raunchy gags don't work. For instance, when the three men are tasered to the head and the 'nads by the cops in front of a classroom of school kids, the scene is painful and unfunny slapstick. And the subplot with an effeminate, vengeful Asian gangster named Mr. Chow, played by Ken Jeong (veteran of Judd Apatow pictures), has a sour setup but a more pleasing payoff. But Mike Tyson's cameo is worth a chuckle, as is Helms' improv piano tune, and a whole blackjack-table scene reference to "Rain Main," and the “revealing” photos during the ending credits are shockingly funny and a blessed payoff.

Galifianakis is an MVP as the “Fat Jesus” of the group, keeping his performance just a notch above creepy (even if no one can pronounce his last name); TV's “Daily Show” and “The Office” co-star Helms is the most relatable of the dumb-as-a-stump characters; and Heather Graham shows her breast as a stripper with a heart of gold (and with child). Viewed drunk or not, "The Hangover" is fun and worth remembering in the morning.