Top form or not, Woody's "Midnight in Paris" charms 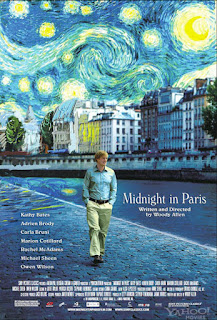 Woody Allen has always interpreted his beloved Manhattan as not only a romanticized city but a state of mind. Continuing his change of scenery (since 2005's "Match Point") but not losing that sense of place, Paris follows suit in his latest, "Midnight in Paris." It's a truly charming valentine to the City of Lights and for being the Woodman's 41st film, a literate, witty, playfully clever lark. Judging by how European cities bring out the best in this film auteur, Allen has announced that next he's shooting in Rome. We're there.

Owen Wilson, as the Woody Allen stand-in, stars as Gil Pender, a distracted Hollywood screenwriter on holiday in Paris with his fiancee Inez (Rachel McAdams) and her conservative, disapproving parents (Kurt Fuller, Mimi Kennedy). Instantly enraptured by Paris, Gil is the type of person who feels like he should've lived in the 1920s and wants to reinvent himself as a novelist. While Inez is more interested in fine dining, accessory shopping, and late-night dancing, Gil loves the city and wants to take in more of it.

One night after a wine tasting, Gil gets lost on his way back to the hotel. But at the stroke of midnight, he slips into a twilight zone, being transported to the golden-aged 1920s. Suddenly, he's on a first-name basis with Ernest Hemingway (Corey Stoll), Zelda and F. Scott Fitzgerald (Alison Pill and Tom Hiddleston), Gertrude Stein (Kathy Bates), and Salvador Dali (Adrien Brody), gets to witness Cole Porter on his piano, and even finds his muse in Pablo Picasso's alluring mistress, Adriana (the very lovely and fetching Marion Cotillard). Meanwhile, Enid's dad has a detective follow Gil during his late-night strolls.

Like the story itself, "Midnight in Paris" is a piece of magic. Allen doesn't fuss with scrutiny for Gil's time-travel because like a Dali painting, it's quite surreal and fantastic. Looking for logic would just defeat its intent. Though he wouldn't sound like the first choice as a surrogate for Allen's neuroses, Wilson need not mimic his director and in fact makes his understated portrayal of Gil more sympathetic. The once-shoehorned surfer dude's easy-going persona is perfect here and makes the role all his own.

McAdams' Inez is portrayed as a very status-concious, princessy harpy that you could never see her giving Gil the time of day. Needless to say, they might not be a right fit for one another, even if they share the same taste in Indian restaurants' Naan. If Gil doesn't throttle her, you'll want him to, and soon. The role is more or less a means to an end; as Inez is all over the map as Zelda is, Gil still loves her as F. Scott loves his wife. But given the thankless part, McAdams handles it with more aplomb than what any other actress, like maybe Katherine Heigl, could bring. Fuller and Kennedy, as Inez's parents, as well as Michael Sheen, as pedantic know-it-all acquaintance Paul, are game as the butt of every Ugly American joke. Of the actors playing the colorful greats of the arts, they're all scene-stealers, even Brody who's funny, despite his Dali whittled down to a cameo. Even nicely fitting in her surroundings is France's First Lady, Carla Bruni, as a tour guide.

Allen brings a very relaxed, romantic, and dream-like mood and tone to "Midnight in Paris" that just delights you. Opening with a tourist montage of mundane snapshots of the anything-but-mundane Paris, "Midnight in Paris" counts as one of Woody's most visually resplendent films. Paris, much like New York in his earlier films, becomes a character unto itself. No wonder, since his cinematographer Darius Khondji (last hired by Allen on "Anything Else") shoots Paris with such a warm, beautiful glow. And it's nice to see the Seine banks again as it was last seen in Allen's "Everyone Says I Love You" (1996).

As light and inconsequential as the film is, what it says about nostalgia, the love of art and literature, death being one's greatest fear, and being unhappy in one's present is actually quite universal and profound. Many criticize Allen for not yet returning to form, but in this day and age, finding a film that's transportive and smile-inducing is not such a small feat. It might mean more to have knowledge of and recognize all the artists on display, but "Midnight in Paris" will make you desire a stroll through Paris in the rain.