RSVP to "The Perfect Host" if only to see Pierce 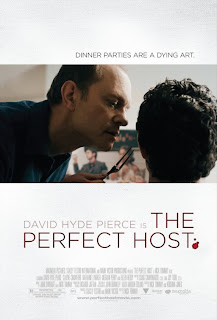 David Hyde Pierce is absolutely barking mad, crossing queer gee-whizziness with loony psychosis, as the perfect host . . . in "The Perfect Host," a sly, twisted thriller laced with an inky-black sense of humor. John Taylor (Clayne Crawford) is a bank robber on the run and ends up ringing the doorbell to a posh Los Angeles house, where Warwick Wilson (Pierce) is awaiting some guests for a dinner party. John talks his way into the genteel dinner host's house, saying he is a friend of Warwick's friend. Giving away plot details would be criminal, but let's just say, the tables are turned.

Putting a twist on the home-invasion subgenre (and expanding onto the filmmaker's well-received 2002 short "The Host"), writer-director-editor Nick Tomnay takes us one way and then another, but the irony doesn't stop there. Playing Dr. Niles Crane of TV's "Frasier" without the broad laughs, Pierce puts on a show of crazy with a capital C. In one scene—that's as creepy as it is amusing—he boogies on down to Rose Royce's soul disco hit "Car Wash" atop his dining room table with his imaginary dinner guests.


Crawford is dangerous and yet intended to be the more sane character of the two. Flashbacks of John and his physically ill girlfriend, Simone (Meghan Perry), flesh out his character. Tomnay shows a fluid slickness in his initial chamber-piece staging with a tensely throbbing musical score. One twist too many, however unpredictable, "The Perfect Host" is still a compact little thriller that should keep you guessing but not coming away fully satisfied.