"Stake Land" looks great but too much of a dullard 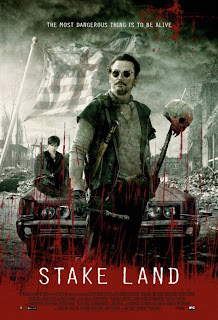 Melding "28 Days Later," "Zombieland," and "The Road," this is one stark, gritty, often nastily bloody indie and a solid calling card for Mickle, whose talent should not be overlooked. It's just too bad sections of "Stake Land" are kind of dull.

The epidemic of vampirism has ruined America. Martin (Connor Paolo), a normal teen, witnesses the death of his parents and baby sibling as Mister (Nick Damici), a no-bull vamp hunter, comes to his rescue and takes him under his wing. The two go on the run. Along their way to New Eden, a supposed safe haven in Canada, they pick up stragglers, Sister Anna (Kelly McGillis, the one "name" cast member of "Top Gun" fame), a pregnant young woman, Belle (Danielle Harris, the other sort-of "name"), and a former marine named Willie (Sean Wilson) while running afoul of a crazy-Christian cult known as the Brethren…and those damn vamps, of course.

The bleak, dead-serious approach is a respite from Stephenie Meyer's vampire soaps at least. The film has moments of creepiness and gory gallows humor, respectively, as when the makeshift family wakes up a sleeping young girl with bloodsucking teeth, as well as the hard-to-kill rundown of an undead banshee. One set piece, nicely captured by one tracking shot, stands out from the rest: a merry hoedown is interrupted by helicoptors dropping vamps one by one.

"Stake Land" is more watchably compelling for its textured, good-looking cinematography than its story or handful of characters. Paolo's performance as Martin is pretty one-note, so as the narrator we see everything being told through his eyes, but there isn't much emotional involvement in him or the others. Martin's consistent narration is sometimes too obvious that some of his descriptions could've been spared as well. Even though these are vicious bloodsuckers not easily slayed, the most interesting elements are The Brethren and the tough-as-nails Mister.

The film gets so bogged down in its mournful, dreary tone, coasting along from one "journey scene" to the next in chronicling the group's travels through the badlands. New Eden never comes soon enough.

While neither a game-changer nor damned enough to drive a stake through the vampire subgenre, if you're voracious for a damn fun vampire movie, you're better off sticking with "Daybreakers" or a more thoughtful take, being "Let the Right One In" or its equally effective 2010 remake "Let Me In." Mickle is still one to watch out for.