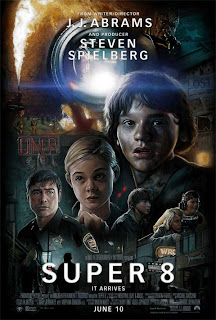 There's a new Steven Spielberg in town. If it weren't for Spielberg, "Super 8" would not exist. Not because he's the executive producer (which he is), but because the film is so Spielbergian in its spirit and technique. Loving, thrilling, and engaging, this homage melds coming-of-age nostalgia, family dynamics, movie-making, puppy love, and monster B-movies all into one "good-old-day" summer entertainment. Imitation is the sincerest form of flattery, but writer-director J.J. Abrams ("Star Trek") still makes "Super 8" his own baby, evoking his inner movie geek with skill and affection.

Set during the late summer of 1979 (B.C., Before Cell Phones), a group of kids in the small working-class town of Lillian, Ohio are making a zombie movie on super 8 film. Joe Lamb (Johnny-come-lately Joel Courtney) is the monster makeup artist, who's lost his mom four months ago in a mill accident, leaving him alone with his dad, Jack (Kyle Chandler), the police deputy. His chubby, bossy friend, Charles (second newcomer Riley Griffiths), is directing the movie and persuades Alice (Elle Fanning), both Joe and Charles' crush, to act in the shoot. One late night, while shooting a scene on the train station platform, the kids witness a pickup truck driving onto the tracks just as an Air Force train comes trucking. The derailment and big explosion are caught on the abandoned, still-rolling camera, as is the "cargo" that escapes from a boxcar. In the morning, the crash is all over the news, which "means it's real." What's going on? The dogs are running away to the next county. Household appliances and parts go missing. Strange Rubik's Cube pieces of metal are found at the crash site. And the military is taking care of it all. Is it a Soviet invasion or something else?

Like his obvious inspirations, "Close Encounters of the Third Kind" and "E.T. The Extra Terrestrial," Abrams' "Super 8" is full of awe and wonder with the nostalgia of "The Goonies" (which Spielberg developed the story for and produced) and the non-Spielberg "Stand by Me." It even has a little bit of "Jaws" in that, like Spielberg, Abrams wisely keeps "the thing" close to the vest for a while. We're teased with glimpses of tentacles and creature sounds, but Abrams slyly keeps it out of the frame. Once it is shown, the design is a little disappointing but still has the size, speed, and ferocity to be a threatening monster. The train wreck is intense and spectacularly staged, and that's without relying on 3-D or too-fake CGI. The suspense set pieces are terrific and instantly call "Jurassic Park" to mind, especially one attack at a 7-11 and another on a dark street as a worker fixes the telephone wire. In a summer movie like this, it's hard to find human characters that you're likely to care about, but "Super 8" has them.

Abrams is lucky to have such a talented cast of fresh faces who never fall short of their naturalism and are able to create believable characters without any trace of celebrity baggage. 14-year-old Courtney, as Joe, is excellently guileless and relatable, and the endearing Griffiths matches, as Charles. Ryan Lee, as the brace-faced pyromaniac Cary, is also a fun delight. No stranger to film, the lovely Fanning has such poise (at only 13) and holds her own amidst the new boys, giving layers and sweetness to the dream girl role. As Joe's gruff but nevertheless loving father, Chandler, of TV's popular "Friday Night Lights," conveys the responsibility of an entire town and his son, while he still grieves over his wife's death.

Abrams also makes a throwback to Spielberg's technique in terms of big crane shots, with a visual cue to an overhead shot of the neighborhood's power shortage (à la "E.T."), as well as employing his own trademark night-time lens flares in his frame. Michael Giacchino's John Williams-esque score augments the thrills and emotions wonderfully; also, immaculately capturing the time and place are songs by Blondie, The Commodores, and The Knack. The production design ("Production value!" as Charles would say) is meticulous, down to every miniscule detail, including walkie talkies, a Walkman, and the "Dawn of the Dead" and "Halloween" movie posters in Charles' bedroom. And don't take the credits as your exit, until you watch the kids' final cut of their "mint" zombie movie "The Case," which the actors actually made themselves.