Mean, Deer-Hunting Streets: "Furnace" familiar in its grittiness but fiercely acted and compelling 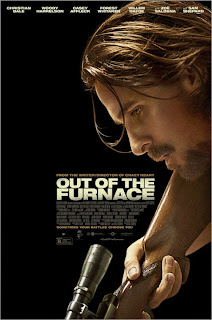 "Out of the Furnace" is nothing out of the ordinary, but it's elevated by a "Winter's Bone"-authentic sense of place and a handful of superb, even incendiary, performances from a must-see cast. Like writer-director Scott Cooper's feature debut, 2009's country-themed "Crazy Heart" (its best asset being an outstanding, Oscar-winning turn from Jeff Bridges), his second feature is another redemption story (and the poster art for each is rather similar). While the doomed feel of it is overly familiar and the plotting becomes increasingly inevitable, this ceaselessly gritty hard-times drama is also fierce, intensely acted, and starkly compelling.

The film wastes no time shocking us right off the top, where a despicably vile type, Harlan DeGroat (Woody Harrelson), and his girlfriend sit in his car at the drive-in watching the Bradley Cooper gore-thriller "The Midnight Meat Train." Well, it's not long before he does something cruel with a hot dog and beats up a few people, and that's the moment where audiences will either leave or settle in for the dreariness that awaits. We pick up with Russell Baze (Christian Bale), a worker at the steel mill of his dying blue-collar town in Braddock, Pennsylvania. His brother, Rodney Jr. (Casey Affleck), is an Iraqi war vet, and their father is dying from having worked at the mill all his life. But Russell is in love with his girlfriend Lena (Zoe Saldana) and he seems happy in his life before a car accident claims the lives of a woman and her son and he's sent to prison. Some time after he's released, Russell returns home, fixing up his now-deceased father's home, and sees that Lena has moved on, now being with police chief Wesley (Forest Whitaker). As Russell makes his life right, Rodney turns to backwoods bare-knuckle boxing as a means to pay a debt to his promoter Petty (a greased-up Willem Dafoe) that he owes to a dicey, short-fused Appalachian meth dealer, who would happen to be Harlan (Harrelson). This spells doom for Rodney, but in an eye for an eye, Russell will not back down.

Full of angst, dirt, and misery, "Out of the Furnace" is one tough, bleak, frequently brutal film. None of these Rust Belt folks have been dealt an easy hand nor can they catch a break, but Russell and Rodney are all the other has, besides their uncle (terrifically played by Sam Shepard), after their dad is gone. Rodney doesn't want to follow in the footsteps of Dad or Russell by working at the mill, so after his duty in Iraq, he does what he sees necessary to make a living. The drab backdrop for such a story (written by screenwriter Brad Ingelsby) is ideal and the working-class milieu, circa 2008, of rundown neighborhoods, dingy bars, and underground fight clubs is relatably realistic, thanks to Thérèse DePrez's lived-in production design and Masanobu Takayanagi's textured cinematography.

So, why should we care what happens to these despairing small-town characters? From a quietly riveting performance by Christian Bale, it's hard not to rally behind Russell, who's a good man in a desperate struggle against what's legal and what will be cathartic. Casey Affleck, too, is explosively tragic as the wounded Rodney, who has too much bravado and pride to live a life of normalcy, and he and Bale establish a comfortable brotherly love early on. Zoe Saldana also fleshes out her small part as the sympathetic Lena, who's a necessary part of Russell's former life but it's hard to buy that she'd leave Russell for Wesley, played by a serious, grumbling, and seriously miscast Forest Whitaker. There is an honest, beautifully acted, subtly heartbreaking scene between Saldana and Bale on a bridge after Russell returns to town. It doesn't have the conventional beats nor do either of the actors find use for histrionics; we just feel both of their conflicted emotions. All of that said, the biggest and most commanding performance comes from a showboating Woody Harrelson, playing the most evil and repellent of his screen sociopaths. (At least his equally sadistic Micky loved Mallory in "Natural Born Killers," right?) From his brusque retort to Russell asking him if he has a problem with him ("I got a problem with everyone") to the way he slimily sucks on a lollipop, Harrelson reaches into the ugliest corners of Harlan DeGroat's soul, or lack thereof, and makes him memorably chilling.

When the film does turn into a revenge exploitationer, it threatens the overall package to go through the motions and amount to little more than that. Still, it takes its time and is no less tense as we feel Russell's one step closer to catharsis. With a moving bookending use of Pearl Jam's "Release," "Out of the Furnace" doesn't gut you like it should, but it is a searing slow-burn about loyalty, guilt, justice, people just trying to get on with their lives by any means necessary—and noteworthy performances, of course. If you want to dig for more than the film is willing to give, like a thematically nuanced thesis on socioeconomic crisis or stop-loss, you won't find it. Nevertheless, one should come away caring about Russell's hopeless (but dramatically earned) search for a light at the end of his gun barrel.