Band of Bros: Hard-hitting "Lone Survivor" too visceral to ignore 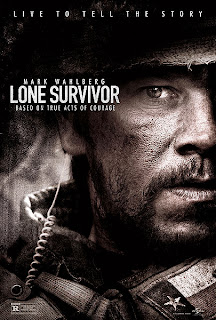 War is ugly, and while that might not sound like a revelatory point, it's brutally and authentically realized in "Lone Survivor." A far more serious and accurate war picture from writer-director Peter Berg following 2012's dumb but fun "Battleship," this film, like many, is based on a true story but also sets a new benchmark after 1979's "Apocalypse Now," 1986's "Platoon," 1998's "Saving Private Ryan," and 2001's "Black Hawk Down" in having the sights and sounds of rough-and-tumble combat looking, sounding, and feeling so harrowing and real. The film is more interested in the real-time action of that fateful day than character development, and yet, through all the sound, fury, and blood, there are visceral and dramatically quiet moments that don't stand the viewer emotionally at arm's length. The title might be a spoiler, but "Lone Survivor" never lacks suspense as it marches on in recounting the gut-wrenching horrors of a 2005 covert mission known Operation Red Wings.

After leaving the Bagram Air Base, Navy SEALs Marcus Luttrell (Mark Wahlberg), Mike Murphy (Taylor Kitsch), Danny Dietz (Emile Hirsch), and Matt Axelson (Ben Foster) are stationed in Afghanistan on a mountain above a village. Lieutenant Commander Erik Kristensen (Eric Bana) has assigned them with the mission to countervail Ahmed Shahd (Yousuf Azami), a Taliban leader with "no earlobes" who has killed twenty Marines in one week. As they hide out, our four heroes stumble into three goat-herding civilians who could threaten to blow their cover. The two young boys and one old man aren't armed, so if the SEALs gun them down it won't turn them into heroes on the news, but on the other hand, they can't have witnesses. Once they make their decision, this American band of brothers has to quickly take cover.

Peter Berg is such a blunt filmmaker that where he potently dramatizes the battle scenes, he is more cursory in building up his characters. When introduced to them in snapshots of jokey banter and heat-of-the-moment decisions, we still learn more about their wives than the men themselves. Murphy's soon-to-be wife wants an expensive Arabian horse, Dietz's wife has interior decorative plans for their home, Axelson has a wife at home whom he chats online with before he goes to "pay the bills," and Luttrell has dibs on one of Murphy's wife's bridesmaids. We also learn that one man is a New Yorker and another is from Texas. However, that doesn't stop us from caring about these four. The four main performances are all on point, Wahlberg, Kitsch, Hirsch, and Foster making a great unit and each excelling with steely determination in their eyes. 21-year-old Alexander Ludwig also registers as green petty officer Shane Patton, who does more to prove himself than just recite the "Ballad of the Frogmen."

By the end of the SEALs' operation, what we certainly can glean from all of them through their actions is that they are brave, self-sacrificing heroes who suffered a lot of trauma, bloody gashes to the face and body, bullet wounds, and broken bones. Based on Luttrell and Patrick Robinson's non-fiction book "Lone Survivor: The Eyewitness Account of Operation Redwing and the Lost Heroes of SEAL Team 10," Berg's screenplay doesn't completely dehumanize the other side of enemy lines, either, as an Afghan father and son from the village protect Luttrell out of duty to their 2,000-year-old code of honor. It's also a relief that the directing half of Berg doesn't fall back on chaotic shaky cam, "Lone Survivor" being shot with documentary-like urgency and vigor and expertly edited by Berg loyalists, cinematographer Tobias A. Schliessler and editor Colby Parker Jr. The combat sequences, especially those with the soldiers tumbling down rocky mountain cliffs, are ruthlessly intense and elicit pain for these men and the viewer.

If "12 Years a Slave" was an unblinkingly realistic capsule of slavery in American history, "Lone Survivor" does the same for its face on war, even if its climax is more Hollywoodized than it had to be. Neither jingoistic recruitment propaganda nor a political piece, it is a war movie in its purest form and, next to 2004's "Friday Night Lights," decidedly director Berg's most accomplished and most important to date. Rough, tough, and as courageous as the men it honors, "Lone Survivor" leaves us with an obligatory slideshow dedicated to the men of Operation Red Wings, set to David Bowie's down-tempo "Heroes." Even if there is a lone survivor, those who weren't as lucky died for their country and died as brothers. It packs quite the punch.