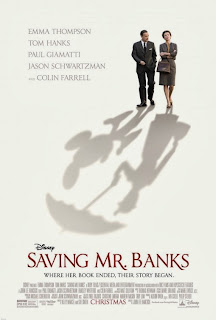 Not every movie can say it fills you with joy, but "Saving Mr. Banks" does this in spades. Gently moving, beautifully performed, and marvelously entertaining, the film is a valentine to the catharsis of fictional storytelling being influenced by real life and the undeniable magic of the Mouse House. Despite one's suspicion that they'll be seeing a lot of self-congratulatory back-patting from a Disney movie being about the making of a Disney movie and co-starring a bona fide movie star playing Disney himself, that's not the case here. With the similitude of 2004's wistfully whimsical "Finding Neverland," which told the story of how Scottish author J.M. Barrie came to write "Peter Pan," this one tells the story of British author P.L. Travers' creative differences with Walt Disney in turning her beloved novel "Mary Poppins" into the now-classic 1964 motion picture. Director John Lee Hancock (2009's "The Blind Side"), working from a witty, respectful script by Kelly Marcel and Sue Smith, shrewdly captures (and balances) the prickliness of Travers and the wholesome charm of Disney without falling too much to either side. It's an absolute delight.

"Saving Mr. Banks" begins in the puffy clouds, the sounds of "Chim Chim Cher-ee" humming over the soundtrack certain to get the viewer humming along. When we first meet the headstrong, misanthropic Pamela Lyndon Travers (Emma Thompson) in 1961, London, she has run out of money and has reluctantly agreed to take a flight to the chlorinated and sweaty odors of Los Angeles to meet with Mr. Disney (Tom Hanks), who's tried for twenty years to get her to sign off on the rights for "Mary Poppins." Given her extreme stubbornness, she fears her magical-nanny creation will become "cavorting and twinkly" in Disney's hands, compromising the purity of how she sees her, and she's totally against fluffy sentiment and animation, especially dancing penguins. At the Burbank studio, Travers immediately micromanages the would-be collaboration and turns down every idea of co-screenwriter Don DaGradi (Bradley Whitford) and songwriting brothers Robert (B.J. Novak) and Richard Sherman (Jason Schwartzman), from the production sketches of the Banks family's home and wardrobe, to the cheery music and lyric choices, along with having her own demands like avoiding the color red in the picture and not casting Dick Van Dyke (although we know who won out there). Can the magical Disney man coax this cold fish into having a change of heart and share her story with the world?

All the while, there's a parallel story, circa the 1900s in Australia, where Mrs. Travers, seen as young Helen Goff (Annie Buckley), spent her childhood with her drink-addled dreamer of a banker father, Travers (Colin Farrell), and her long-suffering mother, Margaret (Ruth Wilson). It's in these vital flashbacks that we understand why "Mary Poppins" is so dear to the author's heart; in the book, the nanny is a savior for the father, not the children. This storytelling device would seem to become problematic in terms of momentum but never does, as the tempo is almost always spit-spot, and doesn't try to pull the wool over our eyes (the little girl is Mrs. Travers!). Back in L.A., after Travers has a foot-tapping breakthrough once hearing the catchy "Let's Go Fly a Kite," the biggest payoff comes at Grauman's Chinese Theatre in watching her face sweetly alternate between agitation and water works, where you feel something rather than just hear Thomas Newman's nonetheless-stirring score. It's schematic but emotionally satisfying, and in much lesser hands, the softening of Mrs. Grumpy could have come off aggressively pat and treacly with animated pixie dust.

The role of the Happiest Place on Earth impresario would thought to be a mere gimmick for any actor, but Tom Hanks was born to play Walt. It's inspired casting since he's a national treasure of movie stars and he gives a slickly copacetic performance with a friendly demeanor following his best work to date in the October-released "Captain Phillips." Hanks particularly nails one special, honest moment later shared with Travers in London. Though, in top form, Emma Thompson runs the show as Mrs. Travers and anchors the film from careening into sugar-coated falseness. With her clipped diction, expressions and body language, she's hilariously quick-witted and dyspeptic and finally affecting as this difficult, brutally honest woman who's a complex, contradictory lonely soul. Her Travers is very formal, liking only to be addressed as "Mrs. Travers," not "Pam," and she always knows what to say ("Responstible is not a word!" she scolds the Sherman brothers). Before opening her vulnerable heart and succumbing to the magic of Mickey Mouse, the character is great fun to watch, thanks to Thompson. (Intentional in the casting or not, Thompson played a Mary Poppins-like nanny twice in the "Nanny McPhee" movies.) The rest of the cast is flushed with impeccable support. Bradley Whitford, B.J. Novak, Jason Schwartzman, and a perky Melanie Paxson, as Walt's office secretary Dolly, make a very funny team during the creative process. Paul Giamatti also does nice, poignant work as Travers' loyal driver Ralph. Given equal time in the sandwiched flashbacks, Colin Farrell is a charismatic mess and creates some touching moments as the eponymous Mr. Banks, and Ruth Wilson is devastating as Margaret Goff. Perhaps only Rachel Griffiths as the stern but helpful Aunt Ellie, Margaret's sister and the clear vision of Mary Poppins, is too briefly used.

A loving, personal companion piece to the Julie Andrews-Dick Van Dyke fantasia, "Saving Mr. Banks" is a reminder of why movies are so special. They give us a place to escape to and restore hope in, but they also tap into the universal idea of imagination. Almost always, the most magical stories stem from what we know, and a story's creator can cope with personal pain from the past through writing, so why wouldn't Mrs. Travers want it her way or the highway? No worries, there is a cute sight gag to the sheet music of "Supercalifragilisticexpialidocious," and period details are forever easy on the eyes—early-'60s La-La Land production design is lovely, as is the honeyed, sun-dappled cinematography, particularly in the melancholy turn-of-the-century segments. Based on the tape recordings of the real Travers, she might have been a toughie on the whimsically sentimental and non-cynical "Saving Mr. Banks," but Walt, himself, would have embraced it with loving arms. You will, too.