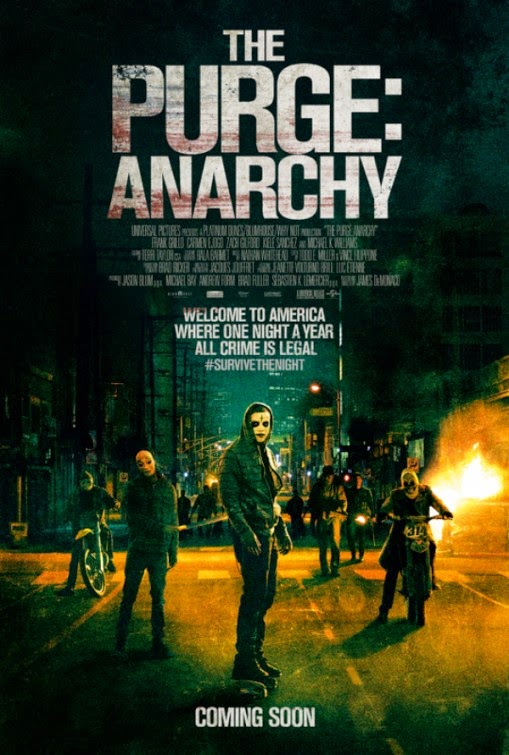 2013's "The Purge" was a box-office topper during its opening weekend, but it surely had its naysayers. Writer-director James DeMonaco's film had an extreme corker of a hook, but while amounting to a down-and-dirty, pretty efficient home-invasion slasher with a novel backdrop that faced moral quandaries head-on and never guaranteed our heroes to all remain standing, it didn't exactly realize its full potential. DeMonaco must have taken the first film's flaws to heart or is just now getting the chance to make the movie he wanted to make with three times the budget because his sequel, "The Purge: Anarchy," gets a more fully realized treatment of the near-future world the original film envisioned. The politically loaded point has been sharpened and communicated at the loudest volume possible, and the setting is no longer confined to a claustrophobic bubble, opening itself up to the Downtown Los Angeles streets. Picking up a year after the first film, it's completely the same premise, albeit magnified and better all around, to the point that this follow-up one-ups its forefather.

Two hours before commencement of the 6th Annual Purge, sanctioned by the "New Founding Fathers" who legalize crime for 12 hours from dusk to dawn, a group of regular people are just trying to survive the night of March 21, 2023. Shane (Zach Gilford) and wife Liz (Kiele Sanchez, Gilford's real-life wife) are about to separate, but while driving into the city to Shane's sister's house, their car stalls and leaves them helplessly running for safety in Downtown L.A. as everyone else is either trying to hunker down in their homes or sharpening their machetes to "release the beast." The rugged, tough-as-nails Sergeant (Frank Grillo) has a revenge mission on his purge night and begins by cruising the streets. Before lockdown, diner waitress Eva (Carmen Ejogo) goes home—"Stay safe!" taking the place of "Happy Holidays!"—to her apartment in the projects with her dying father (John Beasley) and her strong-minded daughter Cali (Zoë Soul), who glues her eyes to radical anti-Purge videos made by firebrand activist Carmelo (Michael K. Williams). Their plans for a peaceful night are shattered when a S.W.A.T. team pulls them from their apartment and hands them over to Big Daddy (Jack Conley), an apron-wearing nut driving around with an automatic weapon in the back of a transport truck. In the nick of time, the Sergeant decides to save Eva and Cali, just as Shane and Liz hide out in the back of his car, but he will only stay with them as long as they make it to the family home of Eva's waitress friend (Justina Machado) and take her car. Will the five strangers make it out without a scratch on their heads before the sun comes up?

Angrier and more nihilistic, but not as gratuitous or exploitative as expected, "The Purge: Anarchy" is a gritty survivalist B-movie made with gristle, closer in appearance to 1979's "The Warriors" and 1981's "Escape from New York" than a horror film. There's still plenty to be unnerved about, not the least being the idea of the wealthy getting their soul-cleansing purge on by killing the poor. At the same time, Wall Street yuppie scum (in the words of "American Psycho") are bloodily chained above the doors of a brokerage. Shane and Liz's early confrontation with masked bikers and skateboarding thugs with "GOD" written on their white faces is creepy, and all of the running the film's survivors do from screaming "Mad Max"-like psychos and Big Daddy lights urgency under the viewer. A shift from a breather to a palpably tense disturbance also runs hot when our surviving five find a safe haven that turns out to be just as chaotic as the outside. Director DeMonaco may approach his critique on class warfare with an in-your-face, point-blank sledgehammer, especially with the use of the mad-as-hell, rabble-rousing Carmelo character, but he keeps the plates spinning credibly and then takes his provocative haves-vs.-have-nots premise one step further into "Hostel" territory with a memorably satirical climax at an auction and then a hunting ground for the rich.

Rectifying the issues of its predecessor, this sequel is more evenly acted, gives us a new set of characters we can instantly care about, and effectively plays on our fears of where society could go and man's inhumanity to man if given the chance. And, with an almost-junky, drive-in aesthetic, the film sports a kinetic, rough-and-tumble shooting style, just right for a nocturnal urban nightmare. For all intents and purposes, Frank Grillo is the no-nonsense leader and he's a strong enough actor as he is a muscular action hero in the making. Even though Sergeant's backstory is gradually revealed and he wants to participate in the purge for understandable reasons, we trust him and feel his grappling of angry impulse and morality. Of the other characters who are fleshed out as more than just squatting clichés made of cardboard, Carmen Ejogo and Zoë Soul are grounded and sympathetic as mother Eva and daughter Cali. Though there is not one "purger" that stands out from the rest like Rhys Wakefield's grinning preppy stranger did in the first film, aged soap actress Judith McConnell is a chilling sight and then just as easily pathetic as a smiling high-society woman when the alleged have-nots turn the tables.

Blumhouse Productions most likely sees a non-supernatural franchise giant here to rival the defunct "Saw" and the ready-for-burial "Paranormal Activity" movies, and there are no complaints here. Questions are still raised, like how anyone can just pick up with their lives the next day or why everyone chooses murder over any other crime, but the premise is more satisfyingly explored this time. From time to time, the film fumbles with a few lines of unsophisticated dialogue that state the obvious and resorts to a convenient, last-minute deus ex machina where the right people come at the right time. Even so, writer-director DeMonaco and his cast make it all work, including a resolution that could have seemed overly pat, and "The Purge: Anarchy" releases a political-minded beast that also works as thrill entertainment.