Semi-Ruthless People: "Life of Crime" fun enough with cast but not a keeper 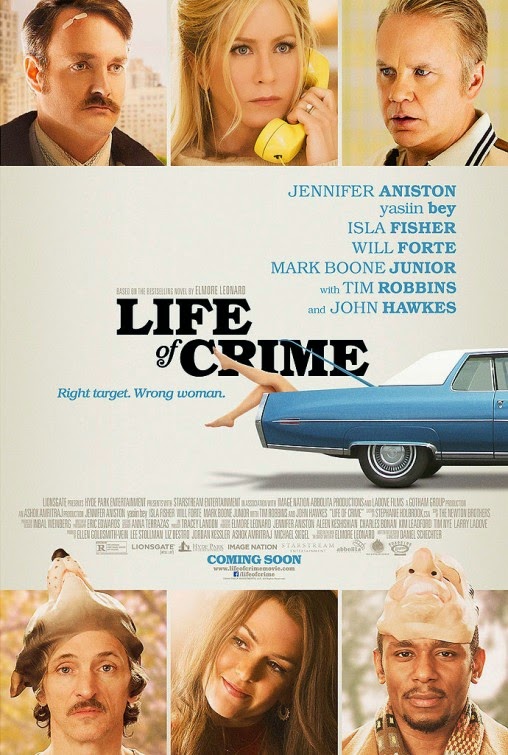 The late-as-of-last-year Elmore Leonard's 1978 novel "The Switch" is the basis for blackly comic caper "Life of Crime," a prequel of sorts to Quentin Tarantino's "Jackie Brown" (itself adapted from Leonard's "Rum Punch"). In the pantheon of the famed author's screen adaptations, this film comes nowhere near the zenith of that 1997 Tarantino paragon—or Steven Soderbergh's steamy "Out of Sight" and Barry Sonnenfeld's sharp "Get Shorty" for that matter—and falls somewhere between those and 2004's dashed-off, lazily mediocre "The Big Bounce" and 2005's energetic but messy "Be Cool." Writer-director Daniel Schechter gives it his best shot and his bright cast seems to be having fun at all times. For a tepid time-passer, "Life of Crime" is fine, but not all that inspired or as colorful as it could have been.

Detroit, 1978. Long-suffering trophy wife Mickey Dawson (Jennifer Aniston) knows her place, set by her real-estate tycoon husband Frank (Tim Robbins). When they send off their tennis-playing son Bo (Charlie Tahan) to Florida to see his grandparents, Frank goes off to Freeport, Bahamas, on "business." Meanwhile, Mickey gets kidnapped from their house by small-time thug Louis Gara (John Hawkes) and fellow crook Ordell Robbie (Yasiin Bey aka Mos Def), who demand $1 million from Frank's trust in ransom. The thing is, Frank is shacked up with mistress Melanie (Isla Fisher), who's been waiting for her man to sign the divorce papers, and won't cooperate because he doesn't really want his wife back that much. Luckily for Mickey, Louis is kind of an amiable criminal.

In adapting Elmore Leonard's piece of work and bringing it to the screen, writer-director Daniel Schechter turns back the clock by thirty-six years, and while the '70s period set dressing is more kitschy than authentic, it's still fun. Even the copyright info under the title during the credit sequence is a cute, Tarantino-esque homage to movies from the '60s and '70s. He also keeps the pieces moving at a brisk pace, although the film does start to thin out and sag right before it's about to wrap up. While no one speaks in a fashion that would sound distinct to Leonard's writing, there certainly are quick one-liners: when Louis calls Frank and has him write down an account number, Frank barks back with, "Slow down! What am I, a stenographer?" Playing the only person we actually care about, Jennifer Aniston digs as deep as she can. She essays an affecting empathy as Mickey who can also be a spitfire when kidnapped, while Tim Robbins is suitably despicable as bastard hubby Frank. John Hawkes and Yasiin Bey put their own spins on Louis Gara and Ordell Robbie, who (if you can remember) were played by Robert De Niro and Samuel L. Jackson seventeen years ago in "Jackie Brown." Hawkes, being one of the most talented character actors we have, carves out gentle layers as Louis. Isla Fisher's charisma alone helps make Melanie more than a floozy and fun to watch; whether it be the casting or the way the character is written, Bridget Fonda also made this character a hoot as a perpetually stoned beach bunny in "Jackie Brown," too. Will Forte also turns up as Marshall, a wimpy married family man who pines after Mickey and gets mixed up in witnessing the kidnapping, and Mark Boonie Jr. is creepy as Richard, a Nazi cultist/White Supremacist who helps Louis and Ordell in their kidnapping scheme and can't help but stare at Mickey through his peepholes.

It bears mentioning that "Life of Crime" cosmetically reminds of the 1986 Zucker-Abrahams-Zucker black comedy "Ruthless People" with Danny DeVito and Bette Midler that it's hard not to draw comparison. However, while that classic was wickedly funny and legitimately wacky, this one gets cold feet and misses out on bringing any bite or many surprises. Maybe this kind of punchy material needed a more stylish, playful director like Tarantino or Soderbergh attached to it. Like a casual summertime paperback, "Life of Crime" is adequately entertaining while it plays out, but it's out of the mind after it excuses itself.