Don't Let Him In: "No Good Deed" watchable but not good, either 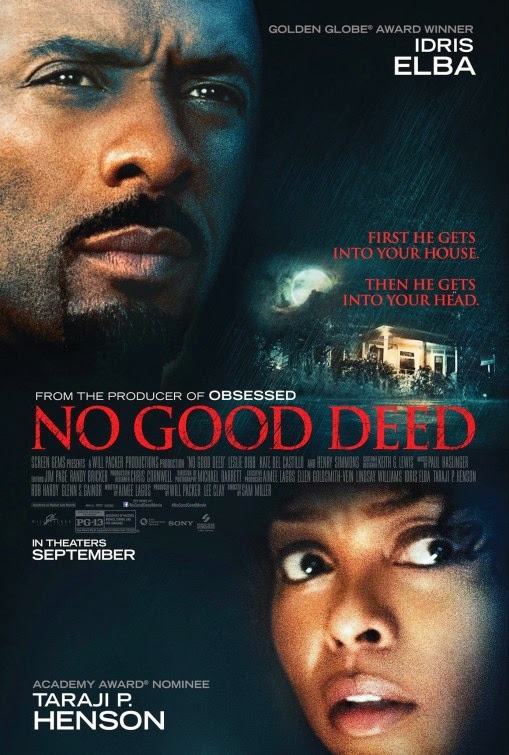 In the time-honored deluge of stalker/home-invasion/"... From Hell" thrillers and on the Venn diagram where actor Idris Elba and "Obsessed" producer Will Packer overlap comes "No Good Deed." Like 2009's stock, trashily entertaining "Fatal Attraction" derivative "Obsessed," in which Beyoncé Knowles and Ali Larter's knock-down-drag-out catfight was really the only nutty thing to recommend it, this rudimentary thriller feels like a theatrically released Lifetime Movie that somehow attracted talented, known actors. Golden Globe nominee Idris Elba and Academy Award nominee Taraji P. Henson even serve as producers, so they must have seen something of value in the project, or they just went where the work happened to be. With little more than meets the eye, except for a lame attempt at pulling the rug out from underneath its audience, "No Good Deed" is just barely passable, elevated ever so slightly by its leads. Like the film's up-front title, it's still no good, indeed.

About to be paroled from prison after serving five years, Colin Evans (Idris Elba) has been suspected but not charged for the disappearances of five women. After shooting down two transport cops and breaking out of the prison vehicle, he pays one last visit to his former fiancée (Kate del Castillo), and it ends brutally. Meanwhile, before a Dark and Stormy Night begins, mother Terri (Taraji P. Henson) watches her husband (Henry Simmons) leave for his father's birthday golf trip, while she stays back in their Atlanta home with her young daughter and infant son. As luck would have it, the psychotic Colin crashes his stolen truck not far from Terri's home and ends up at her house. He charms his way, with a cut on his forehead as evidence of getting in an accident and no cell phone to speak of, and uses her phone to call a tow truck. Terri can't leave him out in the rain, so she invites him in and tends to his minor cut. Big mistake, Terri.

"No Good Deed" doesn't immediately begin as one of those movies that would have Regina Hall's loud-and-proud Brenda Meeks character from "Scary Movie" shouting at the movie screen, "Don't go in there!" It even seems television director Sam Miller (who has directed Mr. Elba on TV's "Luther") and screenwriter Aimee Lagos might subvert expectations in treating Terri as a woman with better judgment than most. Her more sensible actions certainly outweigh her reasonable lapses, but it is so evident that the plotting has to fall back on idiocy for forward momentum. Character factoids are introduced and then dispensed with for broad genre strokes: (1) Colin is officially labeled as a "malignant narcissist" (thanks to a clunky opening news report and hearing), and (2) Terri is a former criminal prosecutor who specialized in cases of violence against women. Basically, Colin is Tom and Terri is Jerry. Then the proceedings make it seem like the film could have been synchronized to your watch and should have been called "Don't," as in the following: Don't let Colin inside your home. Don't offer Colin a glass of wine. Don't not finish him off. Just don't.

There is, admittedly, some tension in how things play out and escalate between Colin and Terri—and eventually, Terri's horny real-estate agent neighbor/best friend Meg (Leslie Bibb) who expects to have a long-overdue ladies' night with a bottle of wine—but too many intelligence-insulting, facepalm-inducing directorial stand-bys, clichés and coincidences get in the way of the thrills the film occasionally coughs up. The dissonant pangs of portent and thunder claps on the soundtrack practically bang us over the head to remind us, "This is menacing," as do repetitive flashbacks of scenes we've just seen. A car alarm goes off a few times. Knocking Colin down the stairs with a fire extinguisher, stabbing him with a kitchen knife, or bashing him in the head with a fireplace grate are never enough to leave him for dead. During the ferocious storm outside, a branch comes through a window just before Colin can be caught in a lie. It is surprising, however, that no one ever checks behind a shower curtain, only to regret it, or hides under a bed with their hand over their mouth. There's a bizarre scene where Colin forces Terri to stand in the shower with him, and it reeks of such a queasily salacious vibe as if the filmmakers meant it to be forbidden titillation since the victim hasn't felt loved lately by her husband and the killer happens to look handsomely like Idris Elba. A brutal confrontation at the climax is predictable, but it is handled with credible choreography by the actors and their doubles. Once the film tries to make Colin's motivations less one-dimensional and hazy pop-psychology and reveal a master plan, a "plot twist" gets tacked on, but it's too arbitrary and contrived to make a lick of difference. Let's just say it's not even near the same level as "The Sixth Sense" or "The Crying Game." Said twist was supposed to be preserved and the reason studio Screen Gems wanted to hide it from everyone by, thus, canceling press screenings at the last minute. Or, because of this film's vicious acts of violence aimed at women, could it possibly be the squeamishly bad timing of Baltimore Ravens star running back Ray Rice knocking out his fiancee in an elevator? No matter the excuse, no one would hide a good movie.

Not that we would expect anything less from such talent, but, bless their hearts, Elba and Henson are present and commit to their parts as victimizer and victim. As Colin, the strapping Elba is intensely watchable, ably switching his demeanor from seductive charmer to cunning, imposing psycho on a dime, but he's asked to do nothing more than strike one note as a threatening, indestructible Jeffrey Dahmer. As Terri, Henson is her charismatic self as a hard-working mom and conveys a vulnerable fearfulness when she lets a stranger into her home, while also making the damsel-in-distress a believable fighter. Still, she's mostly a woman-in-peril survivor type and nothing more. Even Leslie Bibb as flirty Meg is a burst of personality for the short while she's on screen. The acting isn't really the problem; the screenplay and direction are more to blame. As B-movie exploitation that could be viewed on late-night basic cable, "No Good Deed" makes its drop in quality gradually. Finally, it just adds up to little of note. It's not bad enough to be the topic of conversation at parties, and it's too dumb to be that riveting or make you sleep with a knife under your pillow.