Skull-king Around: Hader and Wiig are lovely together in tender, funny "Skeleton Twins" 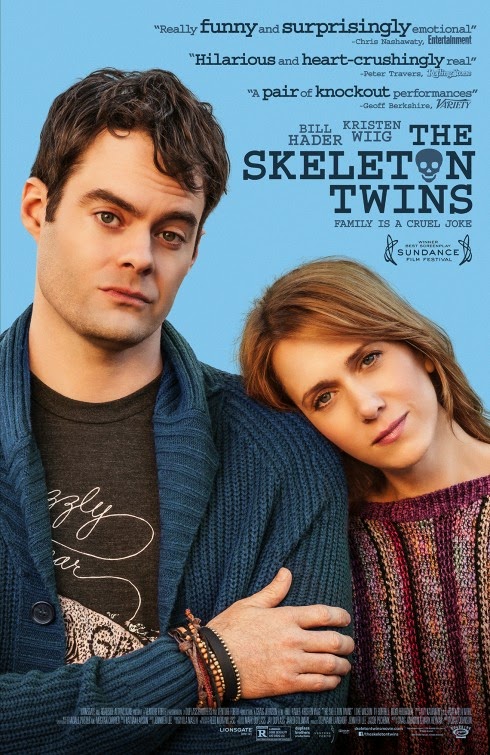 If the 2000 Mark Ruffalo-Laura Linney indie "You Can Count on Me" didn't exist, another bittersweet dramedy about the rekindled bond between an estranged brother and sister might sound like a fresher concept. Sundance-approved indie "The Skeleton Twins" mines pretty bleak subject matter, too, but, by and large, it's like a recurring frown that keeps getting turned upside down. On a lighter note, it's hard to feel blue when former "Saturday Night Live" cast members and friends Bill Hader and Kristen Wiig ground such dark, ostensibly depressing material with their innate levity and joy, jointly and individually. Supporting this spectacular duo is writer-director Craig Johnson (2009's mumblecore-y "True Adolescents") and co-writer Mark Heyman's (2010's "Black Swan") screenplay that knows what emotions to stir and when and where. Here and now, and by the end of the year, this is a keeper.

Twin brother Milo (Bill Hader) and sister Maggie (Kristen Wiig) used to be known as "the gruesome twosome" by their Halloween-loving, now-late father who committed suicide years ago, but they haven't seen one another in ten years. Self-destruction and depression must run in the family because when we first find Milo, he attempts to end his life in the bathtub of his L.A. apartment. Over in her upstate New York hometown, Maggie isn't doing too well, either, about to swallow more pills than recommended just as she stops to answer a hospital call about Milo's condition. Though he resists when Maggie flies to see him, she invites him back home for a while to stay with her and her upbeat, cool-as-a-cucumber husband Lance (Luke Wilson). A gay waiter/struggling actor without an agent, Milo can't seem to get his act together, dropping in unannounced to reconnect with older book store owner Rich (Ty Burrell), his former high school English teacher who seduced him. Maggie, though holding down a good job as a dental hygienist, isn't above having her own issues when she begins sleeping with her hunky Aussie scuba-diving instructor (Boyd Holbrook) and hasn't been honest with Lance in her cold feet over getting pregnant. Will these twins get their crap together while they're together?

Too modest to come off precious and too true to come off cloying, "The Skeleton Twins" is not a heavy drama nor a zany comedy, but a nimbly executed hybrid of both tones. It is easy to attribute the two leads' note-perfect performances to this little film's big success, but the writing and direction are also on point. Mark Heyman and Craig Johnson walk a tightrope, counterbalancing real-life crises and a refreshingly mordant, prickly sense of humor. They never box in any of their characters, especially the "skeleton twins," as faultless individuals. Milo and Maggie feel like living, breathing, fully formed people in how they make poor, sometimes unlikable choices and yet have enough agency to blame themselves for screwing up. They're not sulking martyrs, either, but in a film that actually charters fresh territory of "the thirtysomething"—move aside, twentysomethings and middle-agers—Milo and Maggie just happen to be depressed at this certain point in their lives. And, as brother and sister, they promise not to keep secrets, even when one of them does and isn't proud of it, but most importantly, they learn to fight to strengthen their bond to what it used to be. After all, siblings need to stick together.

No stranger to bending her comedic chops and widening her range as an equally dramatic talent, whether it's in "Friends with Kids" or this year's "Hateship Loveship," Kristen Wiig is exemplary as Maggie. In a role that plays to her well-rounded gifts, Wiig finds layers of regret and uncertainty and, best of all, brings understanding and empathy to those layers. From playing stereotypically flamboyant "city correspondent" Stefon on SNL's "Weekend Update" sketch, Bill Hader is the standout without outshining Wiig. He will always do anything to get a laugh, but this is a revelatory change-of-pace turn that puts him on the same promising career journey as his co-star. In playing a sarcastic, depressed gay man, Hader never overdoes or underdoes it, thus showcasing his deeper abilities to provide pathos with the laughs he can so easily extract. Like the many sketches they shared together on the small screen, Hader and Wiig are a dream team, so it's not even close to being a stretch that they are twin siblings. Seen in their lovely, effortless rapport, they bring out the best in each other, and they both do awards-worthy work that will probably go underserved by the Academy.

The supporting roles could have been handled as thankless caricatures or types, but the way they're written or acted, or just a combination of both, exceeds expectations. Luke Wilson's Lance would ordinarily be pinned into a corner as a weakling or a jerk, but thankfully, he's a sweet, go-with-the-flow kind of guy who still might not be right for Maggie. Ty Burrell, in a night-and-day departure from his hilariously endearing performance as doofus husband/dad Phil Dunphy on TV's "Modern Family," impresses as Milo's first love who's now living a lie. Joanna Gleason even provides shades of empathy in her brief moments as Milo and Maggie's spiritual, self-absorbed mother Judy who remarried, uprooted to Arizona and only makes time for her children when it's convenient for her.

Whether or not it's a crowd-pleasing shorthand for Milo to lift Maggie's spirits, their lip-synching duet of Starship's cheese-tastic 1987 dance-rock hit "Nothing's Gonna Stop Us Now" has an off-the-cuff magic about it that makes such a sequence one of this year's most delightfully joyous moments. It's a safe bet the viewer will be touched and grinning from ear to ear. Same goes for a scene where brother and sister get high on nitrous oxide, and it might include the funniest use of flatulent sounds, thanks to both Hader and Wiig. From flashbacks of holding one's breath underwater and dressing up for Halloween connected to the present, the film's thematic elements are symbolically underscored by Craig Johnson's simple, often poetic direction. Visually, this small film looks like it could belong on the small screen, with its scope relegated to interiors and very tight shots. Then again, Reed Morano's autumnal lensing has a crisp radiance, and there's a graceful score that never dominates. Despite a second-to-last scene with too-perfect timing that still works in its continuity with the opening scene, the film is couched in a ring of truth with its overall lack of resolution and a lasting poignancy in its wistful, hopeful final shot. Milo and Maggie are emotional downers when we meet them and emotional uppers, sort of, when we leave them; they are like addicts to making mistakes, but hopefully, they will learn from them. Capable of even making cynics feel, "The Skeleton Twins" is beautifully tender, gentle, melancholy and also very funny, a wonderful antidote for seasonal depression.