Or, The Ass-Whooper: "The Equalizer" a ridiculously brutal, entertaining blast 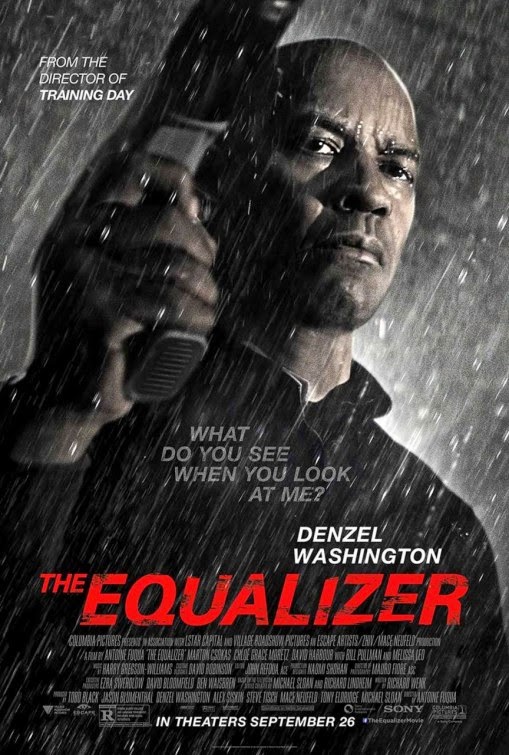 A belated screen adaptation of the popular 1985-1989 TV series starring Edward Woodward as a retired-intelligence-officer-turned-vigilante and relocating from New York to Boston, "The Equalizer" doesn't fall into the trap of deadly seriousness or one-liner-spewing jokiness. Instead, as written by screenwriter Richard Wenk (2012's "The Expendables 2"), directed with invigorating brio by "Training Day's" Antoine Fuqua, and headlined by "Training Day" star Denzel Washington, this is a ruthlessly R-rated, unapologetically take-no-prisoners entertainment that, despite its fuzzy moral stance, is just cool as hell. On a narrative level, the film doesn't reap any ground that hasn't already been fertilized before. Since the dawn of time, vigilante movies have proven that violence begets more violence and never really solves anything. It's still just a revenge picture—a very, very violent and stylish one—but helps create the illusion that it's more than just Washington teaching corrupt pigs lessons, kicking Russian mob ass and not wasting time to take names. Even as just that, it's a kick-ass blast.

A head-shaven Denzel Washington is ideally cast as Robert McCall, whose government operative days are behind him but never forgotten as he lives alone and keeps down a modest job at a Home Depot-type store. When he goes to a late-night diner to read and drink his tea from home, a teenage call girl named Alina/Teri (Chloë Grace Moretz), with the dreams of being a recording artist but tied to her Russian pimp, makes small talk with him. They begin a friendship, and then another night in the diner, McCall notices Alina's roughed-up eye and hesitance to take a job with a client right outside. But the time he walks home with Alina, he witnesses first-hand the girl being slapped by pimp Slavi (David Meunier) and can't do anything about it. Once he sees that Alina is hospitalized for a worse beating than before, he heads down to the "Russian Nights" escort service above a nightclub/restaurant in hopes of winning Alina's freedom by paying off Slavi. Instead, McCall takes out Slavi and his four uselessly armed henchmen in nineteen seconds (he uses a stopwatch), and his thirst for blood won't end there even when the slick, evil Teddy (Marton Csokas) is called in to fix things for the Russian syndicate. They will all be punished.

For what "The Equalizer" wants to do—because it certainly doesn't have anything deep to say—this is action-revenge pulp that thrills, almost to the point of queasily glorifying its dynamite violence but delivering it with visceral, unflinching punch. It only feels a bit gratuitous when the brutality of the five men is recounted from someone else's perspective who wasn't even there and the camera lingers on someone getting stomped on repeatedly. One could draw superficial comparisons to 2004's "Man on Fire," where Washington's CIA-operative-turned-bodyguard vowed to kill anyone involved in the kidnapping of his charge (Dakota Fanning), although Fuqua's visual style is less flashy and numbing and more stylishly direct than that of Tony Scott. The very first action set-piece, where McCall takes out five gunsels at a time in an upstairs Russian lounge, is the most cathartic and fun to watch since these men are directly responsible for putting Alina in the hospital. The hand-to-hand combat is also expertly choreographed with a brutal impact, such as a corkscrew through the chin and a bullet to the jugular. John Refoua's editing is comprehensibly tight and yet unusually deliberate, slowly simmering before anyone earns their comeuppance. With cinematographer Mauro Fiore behind the camera, Boston is shot as a gritty, glittery crime-ridden landscape, where the nighttime "makes everything seem possible again." There's even one artistic shot of an upside-down Teddy and his tatted back superimposed with the night city sky, as if he's now in control.

Director Antoine Fuqua and screenwriter Richard Wenk foreshadow the eventual return of Robert McCall's past military skills with a vocalized summary of Ernest Hemingway's "The Old Man and the Sea" and then keep up the mystique of this character for a long time. When we first meet McCall, he is quite precise and obsessive-compulsive in his rituals. He has a Zen-like outlook on life by avoiding refined sugars. He places his silverware where he wants it and settles into a good book, courtesy of his late wife's book list. McCall has very few struggles, except for knowing when to quit his vengeful path, but Denzel Washington is riveting and commanding, approaching the role with a friendly generosity and then, with the turn of a switch, a searing intensity and swagger. He's a kind, generous people person who looks as harmless as a Bible salesman (or "a monk," as one of Teddy's thugs calls him) with his plain clothes and book in hand, and he would rather take the bus than drive around in a fast sports car. Robert McCall is usually outgunned but never outsmarted, always being steps ahead of his adversaries and methodically scanning the room before handing out the blows with efficiency. If we didn't hate the girl-abusing scumbags, we would worry for their lives when McCall gets to them. Once our "knight in shining armor" pays a quick visit to a couple of retired intelligence colleagues (Bill Pullman, Melissa Leo), we glean a little more information about McCall. Moreover, he's promised to never go back to what he was, but like he says in a simple line of dialogue, "When somebody does something unspeakable, you do something about it because you can." Works for me.

Dressed like a young Jodie Foster, Chloë Grace Moretz is convincing and affecting as underage prostitute Alina who's hoping for her one ticket out of her dubious occupation and is luckily given a chance by her new father figure. Even between the time Alina is victimized and then catches up with McCall in a final scene, Moretz's presence still lingers, and there might be hope for her. All of the Russian thugs and shady cops (one played by David Harbour) are one-dimensional and despicable, but as Teddy, a fiendishly chilling (and classily dressed) Marton Csokas, nearly resembling a tatted-up Kevin Spacey, at least registers as a more interestingly cold emissary. He's sniveling and formidable with a physical magnetism and a threat in his voice, whether it's condescending a Boston mob boss by belittling him for his size or getting information out of Alina's fellow hooker Mandy (Haley Bannett). Csokas and Washington also share a quietly tense scene across from one another at a restaurant dinner table where either of them could combust and go at the other's throat any minute.

Stubbornly running a little north of two hours, "The Equalizer" comes perilously close to burning itself out and even throws in an excessive, borderline-parodic walking-away-from-a-fiery-explosion sequence in slow motion. Then comes the big confrontation in the booby-trapped home-improvement superstore straight out of a graphic novel with plenty of hardware in bulk at his disposal. One of the most memorably resourceful and creatively grisly showdowns in recent years, it goes over the line into something one might see had Kevin McAllister upped the ante with blow torches, hedge trimmers, power drills, and throat-slashing wire. Nevertheless, there's a much-needed lightness in McCall's friendship with genial, overweight co-worker Ralphie (Johnny Skourtis) who works on getting his weight down in hopes of passing the test to be a security guard. McCall even convinces a couple of the younger guys at work that he was a "Pip," a back-up singer for Gladys Knight. Black humor sneaks in when McCall lets go an armed daytime robber at the store, only to walk down an aisle and take a sledgehammer off the rack; it's implied what he does offscreen after returning and wiping it down in a later scene. Not to fear, "The Equalizer" isn't bereft of feeling or humanity when it's buzzing with adrenaline. Truly an "equalizer," Denzel Washington makes sure of that.