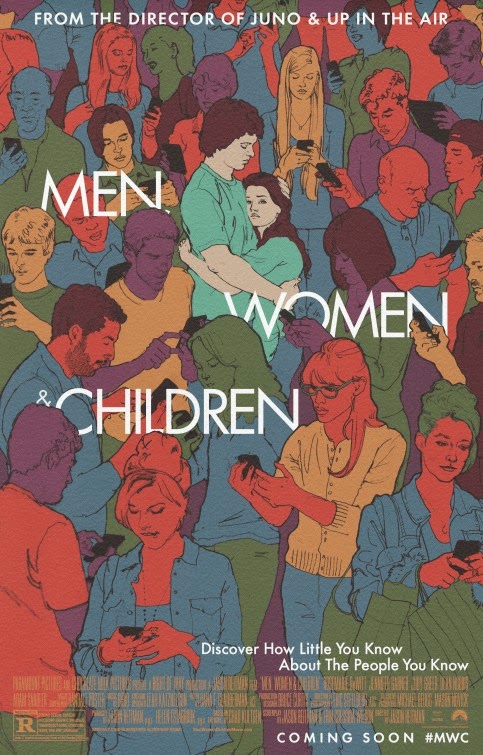 Succeed or fail, "Men, Women & Children" is topical and not out of place in time as a microcosm that no longer feels that small with everyday anxieties of the cyber evils. As a slice-of-life of alarmist horror stories to tell, it's not so much a comment on technology itself but merely rooted in the here and now of our tech-dominated times. However, in adapting Chad Kultgen's 2011 novel, writer-director Jason Reitman (2014's "Labor Day") and co-writer Erin Cressida Wilson (2009's "Chloe") still seem to be unsure of their own social messaging. In fact, their exact message is either too simplistic or just unclear because it might not even be that texting, pornography, video games, and pro-anorexia sites are the roots of the problem. The human problems of sexual dysfunction, chronic masturbation, infidelity, isolation, and self-image could have been just as relevant in 1997's "The Ice Storm" or 1999's "American Beauty," only with Smartphones and social media added. If the point is that nothing has changed, then...okay...so what? Critically, "Labor Day" was unfairly mocked because it was filmmaker Reitman in a different, more earnest mode, many claiming that he was losing his way and his spiky edge. Correction: "Men, Women & Children" is his first miscalculation.

Interconnecting stories and characters in and around East Vista Texas High School, this supposedly provocative examination of the lack of interpersonal contact in our electronic age was much better when it was called "Disconnect" (2013), which was insightful, persuasive and powerful, as "Men, Women & Children" is obvious and Self-Important. No longer seeing the point, Tim Mooney (Ansel Elgort) quits the football team, despite what his coach, teammates, and father Kent (Dean Norris) have to say about it, when he would rather play a MMORPG shooter video game in his room. Father and son were abandoned by their mother who moved to Los Angeles and is now, according to Facebook, getting remarried. Tim starts to connect with a fellow outsider, Brandy (Kaitlyn Dever), who can't use the computer or send a text message without her overprotective, fear-mongering mother, Patricia (Jennifer Garner), keeping an eye on her activity. Meanwhile, former-actress-turned-stage-mother Donna (Judy Greer) keeps up a modeling website with questionably risqué photos of her aspiring-actress cheerleader daughter, Hannah (Olivia Crocicchia), a come-hither sexpot who lives for attention, most recently finding it in porn-obsessed 15-year-old Chris (Travis Tope). Chris' parents, equally porn-obsessed Don (Adam Sandler) and bored Helen (Rosemarie DeWitt), have just stopped having sex, which only drives them to look elsewhere with online dating service AshleyMadison.com and escort services. Between all of these stories, there is also Allison (Elena Kampouris), another teenage cheerleader who secretly battles an eating disorder, feeling shameful in eating a highly caloric Shepherd's Pie with her family (J.K. Simmons plays her father) and, now that she's rail-thin, thinks she might have a shot with an older jock (Will Peltz). Gee, could technology have a cumulative effect on these men, women and children?

"The Risks and Effects of Technology: The Movie" might have been too on-the-nose, but that's virtually what this is. Director Jason Reitman and screenwriter Erin Cressida Wilson don't search for answers or solutions—none of the vignettes put a tidy bow on the issues they raise—but he misses out on gaining even-handed insight into more than a handful of characters once broad introductions are out of the way. Whether that goes with or against his intent, it still doesn't always make for a balanced impact or compelling drama. Not only does the film suffer from mixed messages, but it's unsure of what emotions it wants us to feel. Should we care about these people? Should we judge them? Is the Internet a dangerous place or are the characters just naïve and dumb? Reitman's razor-sharp satirical bent of "Thank You For Smoking" and "Up in the Air," though not on either of those films' levels, comes in here and there. Shots through a high school hallway and cafeteria are filled with teenyboppers' text bubbles, a sight that's LOL-inducing as it is truthful and sad. Early on, Hannah is talking to two of her cheerleading friends about her sexcapades, while they gossip back and forth about her on their phones. Or, take the sight of Hannah and her mother both texting through the mall, the daughter trying to turn on a male classmate with her "sexts." There are also moments of uncomfortable humor when Don sets up shop at his son's computer with a box of tissues and throws his tie over his shoulder. Whether it was a faithful obligation to the source material or just a creative decision, the use of wry, sardonic voice-over by Emma Thompson, who can't help but be wry and sardonic about characters' masturbatory habits, as an omniscient narrator is a ham-fisted, pedantic crutch. One might recall Thompson narrating Will Ferrell's life in 2006's whimsical "Stranger Than Fiction," but it was necessary to that story. Here, instead of allowing the narrative to speak for itself, the v.o. spells out too much and goes on ridiculously pretentious tangents about Carl Sagan's "Cosmos" view of 1977's Spacecraft Voyager probe and how humankind is in desperate need of making contact. That's deep, man.

No one can fault the entire ensemble, all of its members doing their part and bringing something without phoning it in. At the center of the film, Ansel Elgort and Kaitlyn Dever's (2013's "Short Term 12") likably dour Tim and Brandy are like the film's nuanced, identifiable heroes with a real human connection. The writing doesn't condescend them and they have several nice moments together without being on their phones. One wishes Adam Sandler would knock off producing, co-writing and leading the pack in his juvenile comedies and just stick to turning in a dramatic performance because he's quite good when he wants to be or is given the chance. As the sad-eyed Don, he is just fine, ultimately being left untested but making his final scene startling with wife Helen (a never-unexcellent Rosemarie DeWitt) when he asks what she wants for breakfast. This thread doesn't say anything new and plays outside the realm of believability. Did both spouses pay cash for their hotel rooms and services, or do they just not check their account records?

The indispensable Judy Greer is smashing, bringing layers and empathy to single mother Donna who's horrified when finally standing back and realizing what she's been doing was wrong, and it helps she belongs in easily one of the more interestingly creepy threads, a counterpoint to Patricia's. Dean Norris (TV's "Breaking Bad") is also empathetic and quietly affecting as Kent, another single parent still reeling over his wife abandoning him and their son. In the film's most poignant storyline, an utterly convincing Elena Kampouris painfully breaks one's heart as Allison, who takes a while to gain self-respect by listening to "thinspo" users and then making the mistake of sleeping with her crush. Done no favors, Jennifer Garner feels strapped into a tight-assed, disenfranchised caricature of a real person, only really getting a single note to navigate. We understand Patricia's paranoia to a point, but there's a gray line between safety and invasion of privacy. Her daughter hasn't really given her much of a reason to delete her text messages, check her Facebook account and block Facebook friends—oh, Brandy gets complimented by an older boy—and track her physical location with a GPS app. There is just no understanding the preachy, pamphlet-supplying Patricia who's demonized before being granted a small about-face in the last minute after the consequences of an evil text message, but it doesn't feel that earned with her one-dimensional character treatment.

Good films can divide and frustrate, and "Men, Women & Children" will certainly do both, but the confused, misshapen and shallow end result will start a conversation for mostly the wrong reasons. Some of its observations are worthwhile and up-to-the-minute, and most of it is less eye-opening than Reitman is hoping to communicate. It just doesn't illuminate as much as it just wags its finger and reiterates its importance in hopes of achieving profundity. Viewers probably won't have a problem turning their cell phones back on after the motion picture. If that's the case, then the film hasn't really done its job. Reitman used to come off hip and human; now, he seems like an old-fogey Luddite who's saying, "When I was your age, we didn't have cell phones or the Internet."