Going Down Jenny's Block: "The Boy Next Door" standard but steamy, trashy fun 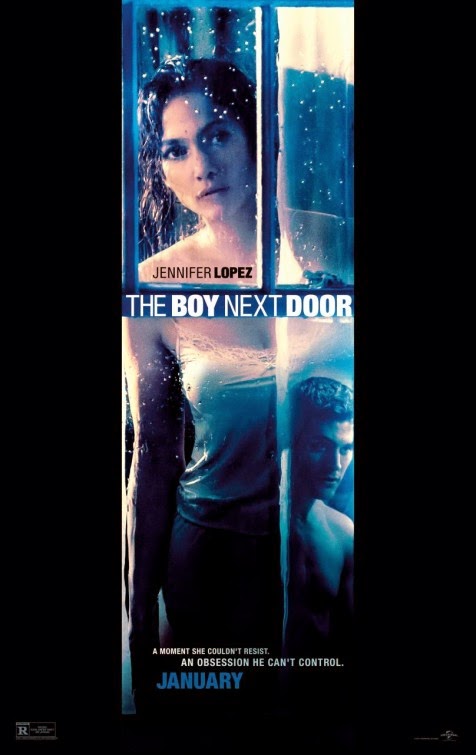 You know the psycho-thriller genre staple in which "The Boy Next Door" belongs. An attractive, seemingly too-good-to-be-true individual becomes obsessed with another and refuses to be ignored, ending in a violent, usually fatal confrontation. Surely, there is no lack of films dealing with the same conflict: Clint Eastwood couldn't get rid of Jessica Walter in 1971's "Play Misty for Me," and Michael Douglas had to fend off crazy-pants Glenn Close in 1987's "Fatal Attraction" and then Demi Moore in 1995's "Disclosure." The same happened in 1992's "Single White Female," 1993's "The Crush," 1996's "Fear," 2002's "Swimfan," 2009's "Obsessed," and so many more. As helmed by director Rob Cohen (who doesn't exactly have the most spotless track record with schlock like "The Skulls," "Stealth," "The Mummy: Tomb of the Dragon Emperor" and "Alex Cross") and written by lawyer-turned-screenwriter Barbara Curry, "The Boy Next Door" is actually pretty fun in a trashy, derivative Lifetime Movie potboiler sort of way.

High school classic literature teacher Claire Peterson (Jennifer Lopez) is feeling vulnerable and lonely, being recently separated from her unfaithful husband (John Corbett) and giving up teenage son Kevin (Ian Nelson) on the weekends. One day over the summer vacation, a helpful, handsome stranger pops up in Claire's side view, repairing her garage door. He happens to be her elderly neighbor's toned, polite 19-year-old nephew, Noah Sandborn (Ryan Guzman), who came from San Bernardino to finish up school after his parents died in an "accident." Noah immediately buddies up with Kevin, earns Claire's trust and shares her interest with Homer's The Illiad, and starts coming to dinner a lot. Then, over a rainy Labor Day weekend while Kevin goes on a camping trip with Dad, Noah comes onto a buzzed Claire, who has just had a bad date followed up with a few glasses of wine, and she can't resist. The morning after, Claire regrets their sexual encounter, but Noah isn't just going to back off, soon revealing his delusional, manipulative true colors.

Given the spate of "So-and-So From Hell" erotic thrillers about dangerous, obsessive characters hiding behind charming facades, "The Boy Next Door" mostly plays out the way we expect, following a cheesy, clunkily edited introduction of Claire's broken marital life. Noah is a handy mechanic, so, of course, when Claire's husband lets his son get behind the wheel of his Dodge Charger, it can't be good. Claire will find a basement shrine full of blown-up photos of her and convenient clues, immediate proof that Noah needs more than a school expulsion. He's also a sharp-shooter with boxing skills and a heavy dose of impulsivity, so it's a relief Claire and her family don't have a pet dog that can be shot, or even a pet rabbit to be boiled. And, once getting past Garrett unbelievably cheating on Claire, who just so happens to look like Jennifer Lopez, the rest is easier to buy by comparison within the low-IQ plotting of the genre. Sure, a rigged jump-out cat jolt is deployed, as are the obligatory stalker clichés of Claire sneaking a naughty peek across the way at a naked Noah from his perfectly placed bedroom window, flowers being sent to work, and photos of the torrid affair being printed out at the stalkee's workplace. However, those are acceptable trade-offs for a clap-worthy climactic showdown in a barn and a nasty, loony horror-style surprise involving an EpiPen. Even for the Big Finish, Noah amusingly looks dressed like one of the private-school Warblers from "Glee."

In her first headlining vehicle since 2010's dreadfully sitcommy "The Back-Up Plan," Jennifer Lopez's appealing presence helps the vulnerable but fiery Claire remain a sympathetic and root-worthy lead, even as she shuts her brain off to engage in coitus with a younger man showing her attention. That and Claire must become the kind of movie heroine who should be shaken like a baby for entering her friend's dark farmhouse instead of calling the authorities and then later hitting her stalker once with an object, only to turn her back. The constant glistening of her lip gloss, even during home-cooked family dinners, distracts, but, hey, who said on-the-verge-of-divorced women can't always look her best? Who knows what the future holds for his acting career, but his boyish good looks and rippled abs notwithstanding, Ryan Guzman (2014's "Step Up: All In") has a real spark, being Lopez's sexy match every step of the way. As stock, unsympathetic psychopath Noah with a maniacal glint in his eye and invisible horns on his head, he has little to go on besides smoldering sex appeal, which comes naturally, and shifty menace, which he does pretty well with a devilish smirk. One can certainly see why a gallant and personable guy with a hot bod like Noah would be hard to resist for Claire, and the camera practically licks him up while he fixes Claire's (literal) alternator in a muscle shirt. Also worth mentioning: Kristin Chenoweth, as Claire's wisecracking best gal pal and the school's vice principal Vicky, has plenty of tartly quick-witted moments.

Many of the howlers, most likely inadvertent and not by design, just add to its fun-bad, guilty-pleasure watchability. Director Rob Cohen at least does a fine job of finding a sexual tension between Lopez and her eighteen-years-younger co-star, and he shows his "Fast and the Furious" roots in an admittedly tense vehicular sequence along the winding roads of the San Fernando Valley. Sometimes, there are moments of obvious ADR detracting from the film's overall polished production values. To its credit, "The Boy Next Door" takes a couple of gleefully batshit-crazy gambits for the best. It ups the steaminess factor, surpassing one's expectations for an R-rated mainstream release, coming close to breaking Lopez's no-nudity clause, and perhaps giving the upcoming "Fifty Shades of Grey" a little competition. Ryan Guzman sells the script's knowing double-entendre lines, "I love your mother's cookies," and "It got pretty wet here," in front of Claire's husband and son. Also, Noah's heated verbal confrontation in the office of vice principal Vicky (Kristin Chenoweth) is bound to get audiences screaming, "Oh, no, he didn't!" With nothing psychological about it, "The Boy Next Door" is still a dumb, rudimentary popcorn thriller that pours on just enough entertaining cheese and sleaze, so at least it's never a dull one.