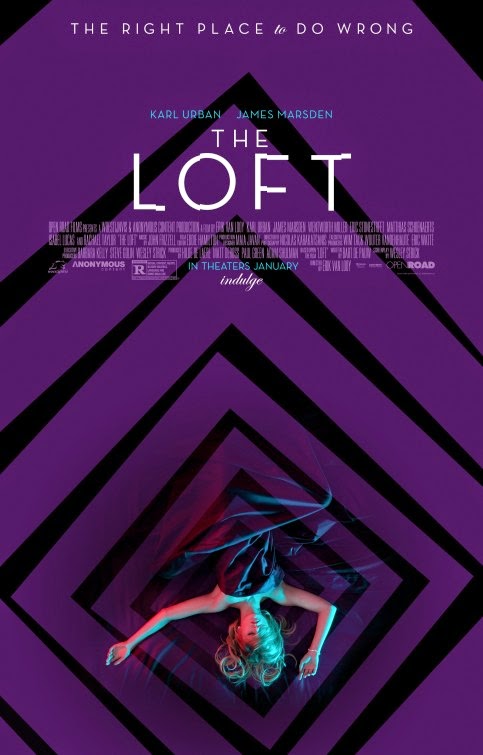 "The Loft" is an English-language remake of 2008's Belgian film "Loft," re-directed by Erik Van Looy and scripted by Wesley Strick  (2010's "A Nightmare on Elm Street"). Shot in 2011 and now being released four years later, there must be another reason it sat on the shelf besides a change of distributors. Oh, probably because it's just never as good as its juicy premise would suggest. This erotic thriller is full of pieces—alternately flimsy, under-thought, overplotted pieces, yes, but pieces all the same—but it's as if all of the script pages blew away out of order and were just then scrambled together. Like any thriller that at least sets up the intrigue right out of the gate, it is admittedly involving to sort through and see how all of those pieces click. In the end, however, "The Loft" turns out to be an empty, heartless waste of time built on a house of cards that eventually comes crashing down.

A year ago, womanizing architect Vincent (Karl Urban) rented an upscale penthouse loft in the heart of downtown Los Angeles and gave keys to each of his longtime friends, psychiatrist Chris (James Marsden) and unstable half-brother Philip (Matthias Schoenaerts), reserved Luke (Wentworth Miller) and crude Marty (Eric Stonestreet). All five men are now married, some with children who are mentioned but never seen, but Vincent makes an arrangement with them all to use the loft as their "private oasis" for extramarital affairs. Following twelve months of the loft getting some use, Luke opens the door one morning to find a naked blonde woman, dead in a pool of her own blood and handcuffed to the bed. In a panic, he rallies up his buddies and they decide who to point fingers at before being interrogated by two detectives (Kristin Lehman, Robert Wisdom). The alarm system was already disarmed, and all five men are the only ones with a key to the place. Will the real murderer please stand up?

Swiftly paced and shot with some sleek visual panache here and there, "The Loft" rarely loses the viewer's interest for an undetermined mark of time. That's a relief, too, since the script begins at the end, segues into a police investigation to recount the events involving the dead body, takes us back to the beginning, and then circles back around to "the present." It's a wobbly, needlessly convoluted construction, but it suffices for a while. Then there are the insipid characterizations all around. Anyone could be the culprit here because Vincent, Chris, Philip, Luke, and Marty, all in some capacity, are rich, sleazy dirtbags who all deserve a time-out or castration. Some are more unpleasant and morally bankrupt than others, but the funny thing about a thriller is that we still need some sort of redeeming humanity or interest in a character to care about the people involved and see which ones come out unscathed. Also, in this film's nasty, cynically sexist worldview, the allegedly weaker sex are presented to be either resentful cold fish, prostitutes, disapproving shrews, or helpless, objectified victims, although the point should be made that none of them just foolishly stand by their adulterous men without a fight. "The Loft" doesn't really seem to care about the fundamentals; everyone is an unsympathetic pawn in a grand scheme.

The cast is a sturdy one, and everyone seems to be all in. Karl Urban (2013's "Star Trek Into Darkness") smarms it up big time as the for-himself Vincent. Thanks to the always-solid James Marsden, his Chris comes the closest to being called a relatable protagonist. Wentworth Miller (TV's "Prison Break"), sometimes looking like Hayden Christensen or Channing Tatum, is interesting to watch as the very enigmatic Luke who always seems to be harboring something. Reprising his role from the original film as Chris' volatile half-brother Philip, Matthias Schoenaerts (2014's "The Drop") is even more magnetic to watch, always looking as if he's ready to explode. And, finally, Eric Stonestreet stands out in a new light, being cast well against-type from the lovably flamboyant Cam on TV's "Modern Family" to obnoxious horndog Marty. The women in the cast are even less well-drawn on the page (including Rhona Mitra, Valerie Cruz, Elaine Cassidy and Margarita Levieva). As Anne Morris, a secretive blonde who starts seeing Chris, Rachael Taylor (2011's "The Darkest Hour") catches one's eye the most, looking stunning and having the most to do on the distaff side, while Kali Rocha is a scene-stealing hoot as Marty's long-suffering wife Mimi. Finally, as Vincent's blonde fling Sarah, Isabel Lucas exhibits a lost-soul fragility beyond her pretty face that lands her in bed as the bloody victim.

Once its final hand is revealed, "The Loft" has transformed from a watchable, twisty-turny whodunit to a who-cares? The screenplay does so much skating through character relationships, hoping the viewer will just accept certain emotional leaps. Scenes are tirelessly explained and recapped that it must have been a chore for the editor to cut them accordingly; in a casino-set scene, there are quick shots of suspicious glances from every female that one can't help but giggle; and the final twist (there are a couple) is just not as ingenious as the film must think it is if the viewer pays attention to who wears gloves. Holding one's attention and then failing to pay it all off, this trashy, meretricious soap will likely go quietly with little fanfare just as it arrived. The first and only rule worth noting about "The Loft" — you don't have to think or talk about "The Loft" after it's over.