Marriage Can Be the Pitts: "By the Sea" flawed but intoxicating look at marital ennui 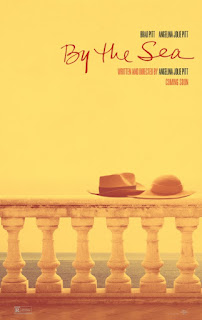 Now billing herself as Angelina Jolie Pitt, the writer-director-producer-actor directs herself and husband Brad Pitt in "By the Sea," her third directing effort that critics seem to be unfairly gunning for as a vanity project and a self-therapy star vehicle. Compared to 2011's "In the Land of Blood and Honey" and 2014's "Unbroken," this is the filmmaker at her most independent-minded and it demands more of a chance. Based on the retro Universal Pictures logo, "By the Sea" is a paean to a bygone era of European art filmmaking in the 1970s but also a travelogue that explores a marriage in crisis and an artist's personal reflection on grief. Glacially paced and not eventful in a conventional sense, this is a curiously interesting effort that will probably be remembered more as an artistic failure than an outright triumph, but at least it's interesting and divisive.

Married for fourteen years, Roland (Brad Pitt) and Vanessa (Angelina Jolie Pitt) get out of New York to vacation on the southern coast of France and stay at a seaside hotel. He is a failed writer and she is a former dancer. He drinks and smokes more than he gets any writing done. She pops pills and lays out on the patio to read or stare out at the ocean with her oversized sunglasses. When Vanessa discovers a peephole into the neighboring room of Lea (Mélanie Laurent) and François (Melvil Poupaud), a younger French couple of honeymooners with a healthy sex life, this voyeuristic hobby soon opens up the line of communication between Roland and Vanessa about where their love has gone.

On screen together for the first time since slam-bang 2005 blockbuster "Mr. & Mrs. Smith" before Brad and Angelina were dubbed "Brangelina" and became one of Hollywood's biggest power couples in the public eye, the couple is terrific together and individually, conveying so much anguish, anger and frustration even without words. As Roland, Brad Pitt (in a rakish mustache) is palpably enraged in his inability to break through his wife's depressed wall and surprisingly tender in his scenes with wise, old barkeeping widower Michel (Niels Arestrup) to whom he opens up. As Vanessa, who's insecure and engulfed by grief, Angelina Jolie Pitt is fragile and shattered, the role really seeming to take a piece out of the actress. Mélanie Laurent and Melvil Poupaud also provide friskier counterpoints to the Pitts' characters.

"By the Sea" is not commercial and too low-energy to reach a mainstream audience, but those attributes make it intoxicating more than not. The deliberate pacing and mundane repetition are implicitly organic to how Jolie Pitt conveys marital ennui, and the film is visually faultless, from costume designer Ellen Mirojnick's clothes to Christian Berger's sun-bathed cinematography. The root of Roland and Vanessa's strained marriage is withheld as an elephant in the room, forcing the viewer to fill in the blanks, but the reveal is anticipated and actually less satisfying than everything that precedes it. Perhaps with an A-lister making moves in an industry that has of late blown the lid off of still-prevalent sexism, Jolie Pitt has so much clout that no one could rein in her overindulgent run time for the final edit or make another pass at the script. Despite its flaws, "By the Sea" is a fine and mostly compelling word—not the first nor the last—in the emotional discord of a marriage.