Dumb and Dumber: "Masterminds" not without some giggles but pretty mediocre 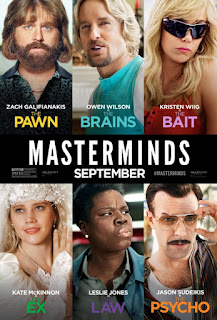 For a film that posits to be “based on a true story,” “Masterminds” (once called “Armored Car,” as seen on the slate in the outtakes) is not some kind of hard-hitting docudrama exposé or cautionary tale. Based on the 1997 Loomis Fargo bank robbery in Charlotte, North Carolina—the second-largest one on U.S. soil—this caper farce is actually a PG-13, Lorne Michaels-produced goof about a bunch of oafs with slapstick stunts and gross-out jokes with vaginal cream and defecation in the pool. Best known for 2004’s “Napoleon Dynamite” and 2005’s “Nacho Libre,” director Jared Hess does have a way of treating his characters with equal mockery and affection, but one wonders what the Coen brothers could have done with this stranger-than-fiction tall tale. Faint praise, to be sure, “Masterminds” is much less dire than most will be expecting, based on principal photography wrapping over two years ago, multiple release delays and the bankruptcy of its studio.

Working as an armored car security guard for cash-handling business Loomis Fargo, David Ghantt (Zach Galifianakis) seeks a little adventure for once in his life. After he and co-worker Kelly Campbell (Kristen Wiig), with whom he’s long carried a torch, joke about what they would do with the money if they robbed their work, Kelly’s pal, Steve Chambers (Owen Wilson), gets the idea to pressure the none-too-bright David into making him their inside man. Since David has the key to the vault, he succumbs and successfully steals $17 million and then, according to the rest of Steve’s plan, buys a plane ticket to Mexico. Kelly’s conscience comes through when realizing Steve has made David the fall guy and become mighty greedy with the loot. When David is identified in Mexico, Steve hires a hit man, Mike McKinney (Jason Sudeikis), to do away with the "mastermind." Stupid is as stupid does.

Like one character’s elegant description of a situation—“dumber than a suitcase full of buttholes”—that might be a fair assessment of “Masterminds,” too. Director Jared Hess and screenwriters Chris Bowman & Hubbel Palmer and Emily Spivey bring such an absurdist streak to this material that most of it rarely takes on a condescending or mean-spirited tone, but whether or not it’s always amusing is often a different matter. White-trash quirkiness and David’s bumbling incompetence are the source—sometimes, alleged source—of the comedy. Two of David’s disguises, one including feline contacts and a long blonde wig and another that makes him look like NBC film critic Gene Shalit, are also very funny. It’s hard not to laugh at the committed mugging of Zach Galifianakis and at his expense, but his David never comes off as much more than a harmless dolt and patsy. Kristen Wiig remains likable, even as her Kelly uses her feminine wiles on David and acts as an accomplice in making him look like the sole criminal, while Owen Wilson doesn’t really get any standout moments as the film’s main scumbag.

Having stolen scenes left and right over the summer in “Ghostbusters,” the wild-eyed Kate McKinnon doesn’t step far out of sketch territory with her out-there shtick as David’s fiancée Jandice, but nearly choice she makes is hilariously inspired. When Jandice is asked why she’s marrying David, she explains that she met David at her husband’s funeral, “That one’s dead. This one’s alive. I’ll take the live one.” Cued to Enya’s “Only Time,” a montage of David and Jandice’s awkward and just-plain-bad poses for engagement photos is also a hysterical highlight. Leslie Jones (the third Ghostbuster in this movie) gets more jokes thrown her way as an FBI agent, as someone comments on how she’s tall enough to be in the NBA and, at a later point, confuses her for a male detective. She handles such slams with aplomb, but there isn't much else for her to do. Even if he seems to wander in from a different (and much darker) movie, Jason Sudeikis might have the most against-type role, not playing the smoothest guy in the room as hitman Mike McKinney. When he and David end up bonding over 1961 classic “The Parent Trap,” it does lend the film a surprising bit of sweetness.

“Masterminds” is a certain type of comedy, twofold. It’s the type of comedy that offers a few giggles in the form of random non-sequiturs, but the viewer won’t really remember the cause of said giggles after the fact. The laughs aren’t all that memorable, but at least some exist rather than none at all. It’s also the type of comedy that feels like a project beneath everyone’s talents, all of them playing caricatures who aren't exactly the sharpest tools in the shed, as if the actors signed on before they became household names. Every moment that works is more on account of the cast and only their collaborative comedic skill keeps this from being a total disaster; it's just a mostly inoffensive waste of time. With worse comedies out there raising one’s tolerance for mediocrity, “Masterminds” scrapes by from not being rancid or too annoying.