Brace for Heroism: Eastwood and Hanks stick the landing of thoughtfully crafted “Sully” 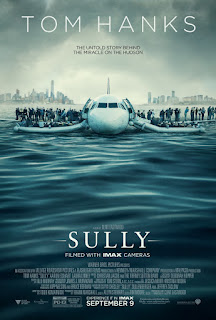 In such an era of a 24-hour news cycle, some press stories that are ultimately positive and prove there still is a little good left in the world sometimes get lost in the shuffle. On January 15, 2009, US Airways Flight 1549 was departing from LaGuardia Airport to Charlotte with 155 souls and 3 flight attendants on board, but pilot Captain Chesley “Sully” Sullenberger had to make a forced water landing in the Hudson River and evacuate everyone aboard. It was a risky decision, but a necessary one, and Sully was branded a national hero. Everyone has heard of the “Miracle on the Hudson,” and with any dramatization of a true story taken to film, the viewer already knows how it ends. Obviously running longer than 208 seconds, veteran director Clint Eastwood’s “Sully” takes a look at both that miraculous landing and the aftermath.

When the film first introduces Sully (played by Tom Hanks), a commercial airline pilot with 42 years of experience, he is full of self-doubt. He does not feel like a hero, being plagued by nightmares of the plane crashing and the pressure of being in the limelight and under scrutiny. Minutes after takeoff, he and his co-pilot, Jeff Skiles (Aaron Eckhart), suffered a double engine failure when a flock of geese disabled both engines and had to make a quick decision, despite the instructions by air traffic control to circle back to the runway. Now set up in a Marriott Hotel, Sully is under investigation by the National Transportation Safety Board (Mike O’Malley, Anna Gunn, Jamey Sheridan), who make it their goal to prove that the pilot could have made it back to LaGuardia or to New Jersey’s Teeterboro Airport. After the fact, Sully’s saving of 155 passengers is a wonderful miracle, but did he have to put everyone at risk?

An honorable portrait of unquestionable heroism, “Sully” is more thoughtful than most “untold true story” dramatizations and appealingly forgoes a surplus of adoration that keeps the film from being hagiographical. Directed by Clint Eastwood (2014’s “American Sniper”) from a tightly constructed screenplay by Todd Komarnicki (2007's ridiculous Halle Berry-starring thriller “Perfect Stranger”), based on Chesley Sullenberger’s autobiography “Highest Duty” co-authored by Jeffrey Zaslow, the film begins after the crash. It resists stodgy chronology for a sensible nonlinear structure, recounting the leading-up to the crash from various perspectives, that of the air-traffic controller and several of the passengers, “Airport”-style. The depiction of the turbulence in the cockpit and the cabin, where the landing chants—“Brace, brace, brace! Heads down, stay down!”—of the flight attendants (Ann Cusack, Jane Gabbert, Molly Hagan) chillingly reverberate, and the forced water landing on the Hudson River is truly harrowing. Also, between the fascinating NTSB investigation and Sully’s inner crisis, there is a judicious amount of biopic leanings with standard, none-too-revealing but logically placed flashbacks to a young Sully first exploring his passion in flying planes.

After being on the sea in “Captain Phillips,” national treasure Tom Hanks is his reliable self in the air. It is easy to take Hanks’ effortless talents for granted, but as Chesley Sullenberger, he anchors the film and conveys a haunted man in a top-flight performance without any showiness. The actor may not look like the silver-haired Sully, who does make an appearance during the credits with the actual crew, passengers and his wife, although that matters very little. Hanks more than suggests the man’s duty and resulting PTSD as a pilot in charge of human lives in the air. Lending terrific support and levity is Aaron Eckhart as co-pilot Jeff Skiles, who was the only other person to be in the cockpit with Sully on that day. As Sully’s concerned wife Lorrie, Laura Linney fills in this thankless part with more weight and depth than was written on the page, and it’s entirely played over the phone while her character is in Danville, California. There is also an array of familiar faces (Valerie Mahaffey, Sam Huntington, Christopher Curry) playing the harried passengers.

Though any film could be afforded more complexity in 20/20 hindsight, “Sully” is made with such a finely understated simplicity that it is nearly miraculous there is any impact at all. Much of the film takes place in Marriott hotel rooms and conference rooms when it’s not on the plane, and somehow, director Clint Eastwood and cinematographer Tom Stern still bring workmanlike production value to those otherwise bland locations. There’s great poignancy and humanity in the last moments of Sully and Skiles’ investigation during their public hearing where the simulations by other pilots do not compute with the real experience. Even though the results of the story are public knowledge, it is in the filmmaker’s crafting of tension that keeps it all compelling. Eastwood brings special care to his study of not what makes a hero but what makes a human being with expertise. “Sully” might just be Eastwood’s most accomplished effort in years.