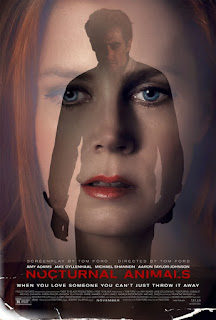 Obliterating any pundit’s cynical preconceptions of a fashion-designer-turned-filmmaker’s sophomore effort, “Nocturnal Animals” so easily could have sat there on the screen as an admirably stylish but emotionally aloof and self-serious work of modern art behind a glass case. Written and directed by Tom Ford, who waited seven years to find a worthwhile project to follow up his impressive 2009 debut “A Single Man,” it is, much to the contrary, one hell of a knockout. Adapted from the 1993 novel “Tony and Susan” by Austin Wright, “Nocturnal Animals” is engrossing and fascinatingly complex as the deconstruction of an artist’s veiled influence through the prism of a disturbing, nihilistic revenge-fueled noir thriller. A seductive, cunningly told example of literary storytelling mastery that's easy to get lost in, it coalesces and then blindsides with its cumulative power and sears in the back of the brain.

Chic, affluent Los Angeles art gallerist Susan Morrow (Amy Adams) should be happy, but she’s tired, she’s lost all passion for her work, and upper-crust life with her seemingly perfect husband Hutton (Armie Hammer) is more of a facade. When Susan receives a manuscript written by ex-husband Edward Sheffield (Jake Gyllenhaal), it is dedicated to her and even titled “Nocturnal Animals,” a name which Edward called Susan. As Susan sits down to read, she is both gripped and appalled by the dark script. The novel is a violent, harrowing crime yarn about a family man named Tony (also played by Jake Gyllenhaal) who’s taking a road trip through West Texas with wife Laura (Isla Fisher) and daughter India (Ellie Bamber). Driving through the night, the family is run off the road by two different cars of men who terrorize them and then corral Laura and India but leave Tony in the dust. Continuing to read Edward’s story page and page, it forces Susan to evaluate her life, realizing that this is his way of exercising his own demons faced in their relationship and that it might be mean more than anything in her present lavish life.

Startling and hypnotic in its daring from the opening credits, “Nocturnal Animals” will be taken or it will be left. Glittery, slow-motion imagery of naked, morbidly obese women joyously swaying around in patriotic marching-band gear and twirling pom poms, sparklers and batons grabs one’s attention immediately, but the context will certainly be lost on audiences at first. As it turns out, this uninhibited spectacle is a collection at Susan’s installation art opening, possibly representing a screw-you response to American culture’s body-shape standards and body-shaming tendencies. These women on display may not look beautiful to the mainstream gaze, but they are happy, much happier than the modishly coiffed Susan, whose lifestyle now leaves much to be desired. Then writer-director Tom Ford pulls off a high-wire act faultlessly with equal urgency and fluidity, as if every ounce of inspiration had already been tapped from the way a back-and-forth, time-hopping structure can be executed in film. As separate pieces, they would still be tense and riveting—for one, the brutal revenge story-within-a-story itself would have made Sam Peckinpah proud—but layered together as a whole, the film carries a thematic density and sucker punches with an emotional undertow beneath its sleek, chilly surface. For reasons that don’t crystallize until later, the parallel structure works as a way to inform Edward and Susan’s past when they met back up in graduate school and to enhance the crushing loss and pain.

If anyone ever wondered what Amy Adams couldn't do, she can add reading a manuscript and making it look compelling to her repertoire. Appearing icy and hardened in dark eye make-up, Adams is stunningly great as a woman who should have it all. Once driven and strong-willed, now empty and disillusioned, Susan slowly reveals more regret as she gets through Edward’s manuscript and opens up her heart more and more before hoping to meet with Edward for the first time in 19 years. It’s in the prowess of Adams' performance that she locates unforeseen fragility and vulnerability inside and eventually outside of Susan. Once more after 2014’s “Enemy,” Jake Gyllenhaal is tasked with dual roles. Though his turn as the fictional Tony allows him more screen time than that for Edward, the themes of strength vs. weakness, love vs. hate, and realism vs. romanticism are vividly personified through Gyllenhaal’s indelibly heartbreaking work. The initially unrecognizable Aaron Taylor-Johnson chills with an untapped danger and threat; in the film's inner timeline, he is effectively unsettling and commands every one of his scenes as a reprobate ringleader. Michael Shannon, not playing a malevolent presence this time, is superbly funny as Detective Bobby Andes, a terminally ill who still chain-smokes and has zero fucks left to give. Also, making such a impression in just one juicy scene in less than five minutes, Laura Linney knocks it out of the park as Susan’s ultra-conservative, pearl-wearing mother. Opposed to what Susan thinks and hopes, her mother chillingly reassures her, “Just wait. We all eventually turn into our mothers.”

Though there is more to the film than just aesthetics, everything in the filmmaking works sublimely in concert and not a frame goes by that doesn’t feel like a motivated choice. The euphoric score by Abel Korzeniowski resounds with the welcome reminder of Pino Donaggio’s work on a Brian De Palma film. Seamus McGarvey’s cinematography is striking and Joan Sobel’s editing meticulous, gritty fiction seamlessly bleeding into a slick reality and even a comparably muted past reality; there is an elegant use of match cuts between Edward’s manuscript and Susan’s real life, and several shots are so sly and precisely composed without clobbering one too much with blunt symbolism.

The implication of the closing shot that director Tom Ford goes out with is oblique yet stingingly clear like a quietly devastating stab in the heart. Like most of the film, it is bound to divide audiences, either leaving them cold and getting them to grumble or rewarding those who prefer ambiguity and something to discuss afterwards. Instead of writing it off, the advice would be to let it marinate and take in a second viewing soon rather than later. Beautiful yet harsh, “Nocturnal Animals” is tragic and full of savage malice, unshakably taking a shred of hope and drowning it into a darkly vicious abyss. It is the most intoxicating feel-bad movie of 2016 and might be the first one of its kind ever about emotional revenge through the art of storytelling.