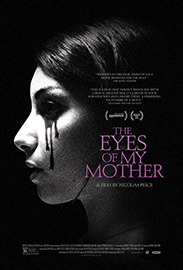 Death and pleasure collide from childhood to adulthood in “The Eyes of My Mother,” a nightmarish tone poem into the dark, sick recesses of the mind after a traumatic catalyst. Making his assured and striking feature debut, 26-year-old writer-director Nicolas Pesce is an artist behind the camera. He is never gratuitous with what he shows in the monochromatic frame but quite patient and detached, approaching shockingly grisly acts from afar without in-your-face splatter. That isn’t to say that the film is tame or less violent because it is deeply disturbing, unforgiving and even upsettingly difficult to watch, but there is a grim beauty and melancholy to the macabre. Melding a psychological horror film into a hypnotic piece of art, “The Eyes of My Mother” holds a disconcerting chill that uncomfortably hangs around.

As a little girl living on her family's farm, Francisca (Olivia Bond) was raised by her mother (Diana Agostini), who used to be a surgeon in Portugal. She was taught to be fascinated by anatomy, as dissecting a cow's eyeballs was as normal as picking wildflowers. One peaceful day, Francisca is approached by a friendly man named Charlie (Will Brill) in their yard; after her mother tries to get her daughter inside, Charlie asks to use the bathroom. When Francisca’s father (Paul Nazak) comes home, his wife is dead. Instead of going to the police, he buries his wife and holds his wife’s killer prisoner in the barn. When young Francisca cares for her "friend" Charlie, she asks why he kills people. In hushed ecstasy, he responds, “It feels amazing.” Her childhood proclivities—keeping the prisoner chained up, severing his tongue, taking out his eyes to store them in a freezer bag and visiting him for feeding time—would later carry over into adulthood, and Francisca (taken over by Kika Magalhaes) gets to experience that “amazing” feeling herself. She is a lonely woman, still living where she grew up, but tries to make friends the only way she knows how.

Singularly for those with a high threshold for bleak character studies about deviant people unlike ourselves, “The Eyes of My Mother” is close to a horror masterpiece that one might not want to watch more than once. Portuguese newcomer Kika Magalhaes captivates, ostensibly playing just a warped, impassive and codependent vessel but belying her commitment of terrible acts is a beguiling grace and unfazed nonchalance. There is no understanding or empathizing with Francisca because being raised on violence is beyond social mores, but her struggle with human connection and the way she goes about rectifying it is not only unsettling but equally sad. Olivia Bond should not go unmentioned, either, as she lays the groundwork for Francisca as a young girl.

Right out of the gate, filmmaker Nicolas Pesce exhibits an auteur touch in every frame and holds up his end of the bargain by being horrific with merciless nerve. With a deliberate European sensibility, his pacing is so still and spellbinding. Shot in starkly gorgeous black and white by cinematographer Zach Kuperstein, the film has a painterly eye with surgically precise compositions—for instance, the overhead shot of Francisca’s father in a milky bathtub—that also happen to be impossible to shake. The sound design is on point, too, perhaps too much with the aggressive chewing and pig-like grunting of Francisca’s friend in the barn. More chilling for what is suggested and happens off-screen, “The Eyes of My Mother” is still a wincingly unpleasant and ultimately despairing portrait of humanity in which a catharsis never comes, so it’s pretty likely that it will not be everyone’s cup of tea. Even if this can be fully appreciated as a first film crafted with extreme care, it is no less of a challenge to fully describe one’s feelings toward it. See with caution.