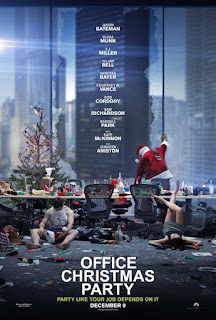 By the sound of “Office Christmas Party,” one suspects that the title was thought of first before a story was created around it. With that said, it isn’t always the most reassuring sign when a film is credited to three writers for script and three different writers for story. Luckily, then, for audiences who are starving for laughs and like watching everyone in the enormous who’s-who cast of comedy talent hit their individual sweet spots, this free-wheeling and merrily raucous ensemble Christmas comedy aims to be a frivolous party romp and mostly has the courage of its convictions. Even as co-directors Josh Gordon and Will Speck (2010’s “The Switch”) and screenwriters Justin Malen & Laura Solon & Dan Mazer get caught up more in the “we-must-save-the-company!” plot and let the rowdy, anarchic party dwindle, “Office Christmas Party” makes sure that the game-for-anything enthusiasm of its cast never flags and the smiles and chuckles come with rapid-fire regularity.

The Christmas season is in motion and the Chicago branch of tech firm Zenotech is struggling in the hands of irresponsible but sociable company heir Clay Vanstone (T.J. Miller), who’s more worried about his co-workers attending their annual office “holiday mixer.” When Carol (Jennifer Aniston), Clay’s ball-breaking sister and Zenotech’s interim CEO, swoops into town, she cancels the party and then threatens to cut Christmas bonuses and lay off 40% of the staff. With the aid of freshly divorced chief technical officer Josh (Jason Bateman) and programmer Tracey (Olivia Munn), Clay promises he can land a client account with tech-buying suit Walter Davis (Courtney B. Vance) by pitching him the idea of an almost-cracked algorithm for an Internet server. If that doesn’t work, they can just loosen him up at the party, which is still on, and hopefully close the $14 million deal. As virtually all of Chicago shows up, the party explodes to amped-up proportions. Zenotech can sure throw a kick-ass rager, but can they still save the company?

Loose and unpretentious fun, “Office Christmas Party” knows exactly what it wants to be and goes just far enough with its emphatic R-rating. Swilling eggnog out of an ice sculpture’s penis? Photocopying naked body parts with a 3D printer? Double check. The film doesn’t have a ton of  original gags—a baggy of cocaine getting mistaken for a baggy of fake snow for the party’s snow machine is as fresh as it gets—but for a strung-together all-star comedy, it’s solidly structured and moves along at a lively pace. There are other plot threads with various co-workers to speak of, but if one doesn’t amuse, another one will. Two of them concern single-mom assistant Allison (Vanessa Bayer) having a hopeful but increasingly strange flirtation with accountant Fred (Randall Park), and Nate (Karan Soni) hiring an escort (Abbey Lee) after he’s been telling two colleagues that he has a girlfriend, only to get into deep with the pimp (Jillian Bell).

In this sprawling cast of funny people, there are so many dynamite standout players that one feels bad leaving anyone out. As Josh, Jason Bateman is certainly coasting here as the most grounded one of the bunch but no less making it work, and he’s nicely paired with a comedically adroit Olivia Munn, who rarely gets to show much timing on the big screen as she does as the smart, independent Tracey. Bateman and Munn’s silly dance in snowman sumo-wrestling suits is also cute and proves how game the two of them are. Getting the chance to be more of a co-lead instead of being cast in another throwaway comic-relief supporting role, T.J. Miller is endearing here as Clay, a well-meaning clown with a sweet compassion for his co-workers.

Since 2011’s “Horrible Bosses,” Jennifer Aniston has proven herself to be fearlessly funny when given the opportunity. Playing another horrible boss as Carol Vanstone, she may not get as many daring shots to be as wickedly entertaining as she did as the sexually voracious Dr. Julia Harris, but Aniston is quite the pistol, even taking delight in talking down to a little girl at an airport gate. As uptight Human Resources department head Mary, a parrot-owning, multi-denominational holiday sweater-wearing “human pop-up ad,” Kate McKinnon is just a treasure. She has the special gift to turn nearly every loopy facial expression and line delivery into comic gold, and only she knows how to make a fart joke work. As mood-imbalanced, heat-packing pimp Trina, the go-for-broke Jillian Bell is her usual force-of-nature self, stealing every scene she’s in as her character shifts gears from nice and friendly to dangerously scary and never being at a loss for words. Also, around the margins, Vanessa Bayer uses her wide smile to her advantage; Rob Corddry scores some laughs as the angriest customer service representative; and Southern comic Fortune Feimster owns two hilarious bits as an overeager first-day Uber driver who goes on a tirade about the name “Carol.”

“Office Christmas Party” could always be funnier and more clever in places, indeed. It does, however, give off the pleasingly quaint impression of a tightly scripted comedy and not one with too much interminable Apatow-style ad-libbing that slows the pacing to a dead halt, even if there is proof in the end-credit outtakes that there was riffing on set. Pay little attention to contrivances required to keep the plot wheels moving—and a forced, needless development that has Carol offering Josh a job at her New York branch—and one will have a rollickingly debauched good time. Bound to get a bum rap, “Office Christmas Party” may not be brilliant, but as one of those comedies where you laugh fitfully just enough times, it’s like a Christmas miracle of spiked egg nog and naughty corruption without any boss supervision.