Be Kind Rewind: “Beyond the Gates” a fun micro-budget horror "Jumanji" 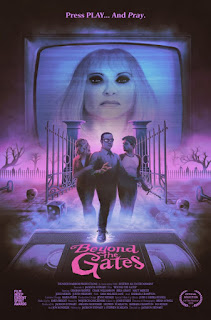 “Beyond the Gates” is like “Jumanji” or “Zathura,” albeit with nocturnal ghouls and gory exploding heads. Tipping his hat to all of the cheesy B-movie relics that he most likely devoured from one box cover to the next in the 1980s and early-‘90s, director Jackson Stewart uses a VHS board game as a springboard to make his feature debut, working from a script he wrote with Stephen Scarlata. For a loving, micro-budgeted tribute to the long-past days of the faded VHS format and mom-’n’-pop video rental stores, this genre geek was ready to love it unconditionally, sight unseen. While the finished product is far more inspired in its conceit and in moments than its overall delivery, “Beyond the Gates” is phantasmagoric, rich with retro atmosphere and feels like something Don Coscarelli might make today.

Estranged brothers Gordon (Graham Skipper) and John Hardesty (Chase Williamson) must reunite under unfortunate circumstances: their alcoholic father disappeared without a trace seven months ago. With Dad presumed dead, the brothers are in charge of packing up the contents of their family’s obsolete video store Mount RushMonster that opened back in the summer of 1992. Gordon brings along supportive girlfriend Margot (Brea Grant) to stay with him in the house where he grew up, while John still lives in the area and hangs around ex-con pal Hank (Justin Welborn, who looks like he came from the same gene pool as Larry Fessenden). Once John locates a missing key to their dad’s office in the store, the brothers find an old VCR board game called “Beyond the Gates” for which they have no nostalgia. Gordon, John and Margot decide to entertain themselves and play, but when they put in the tape and listen intently to the instructions of the game’s sinister hostess (Barbara Crampton), the trio gets weirded out when she says, “Only there can your father’s soul be saved.” It might just hold the key to their father’s absence and something from another dimension, but the cursed game has yet to have a winning soul.

Besides sneakily naming the Hardesty brothers after final girl Sally from a certain 1974 video nasty, “Beyond the Gates” is pretty loud and proud about its love of everything before DVD and Blu-ray. Though ample time must be dedicated to establish a little bit of the history between Gordon and John, the setup takes a long time to cook. Then about an hour in, our brotherly heroes finally enter the game reality, which is just a neon-infused version of their family home, and must obtain keys to unleash the game’s captured souls. Given the budgetary restrictions, director Jackson Stewart does his best to hide the seams with few locations and practical special and make-up effects, so points should be granted for the level of imagination with limited resources. To read the rest of the review, go to Diabolique Magazine.