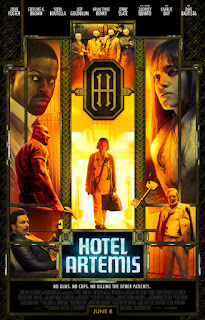 Shockingly not based on any source material (not even an obscure graphic novel), “Hotel Artemis” is armed with a cool, original core concept that almost sounds like an off-shoot of The Continental, an exclusive hotel for assassins where rules are enforced, in the “John Wick” movies (which is, coincidentally, getting its own TV series). In fact, this almost feels like an extra-long pilot of a TV series that promises great things to come, which isn’t a knock but just shines a light on how condensed and underdeveloped the world-building and some of the characters feel when it’s all over. Helmed with buzzy brio and clockwork tightness by debuting director Drew Pearce (who wrote 2013’s “Iron Man 3” and this script), “Hotel Artemis” gets away with being a pulpy, highly enjoyable sci-fi chamber piece with eclectic, star-filled company. It’s not a substantial meal, but it’s a fun, swiftly paced ride to take.

It’s June 21st, 2028 in riot-torn Los Angeles, where the city is on lockdown and water has been privatized by the evil Clearwater Corporation. Expecting just another Wednesday night in her 22 years of managing the Hotel Artemis—a hotel front that is really a furtive, members-only emergency clinic for criminals of all types—agoraphobic nurse Jean Thomas (Jodie Foster) takes a reservation from Sherman (Sterling K. Brown) and brother Lev (Brian Tyree Henry) after a botched bank robbery that has left them both wounded. Mrs. Thomas is such a stickler when it comes to customers abiding by the hotel’s rules that the brothers must verify their memberships in order to get fixed up; if not, they get to deal with the hotel’s muscle, orderly and bodyguard Everest (Dave Bautista). There are two other guests, both named by their room assignments which are named after cities: there’s obnoxious arms dealer Acapulco (Charlie Day), who’s trying to call a helicopter to get out of the city, and slinky hitwoman Nice (Sofia Boutella), who’s waiting for her assignment, a V.I.P., to arrive. Meanwhile, as Sherman waits for Lev to recover, he realizes that his brother stole a pen that contains precious diamonds belonging to the hotel’s owner, The Wolf King (Jeff Goldblum). Putting everyone at risk, including herself, Mrs. Thomas breaks her own rules by sneaking outside and rescuing an injured non-member, cop Morgan (Jenny Slate), whom she knows from her past. When she gets a call from The Wolf King’s hotheaded son, Crosby (Zachary Quinto), that his father requires prompt medical attention, the night “goes to hell in a handbasket full of blood and shit.”

Leaving its dystopian world as a mere backdrop to all the goings-on, the microcosmic “Hotel Artemis” mostly takes place inside, atop, and around the eponymous safe haven. It’s not far off from 2013’s “The Purge,” efficiently conveying the hellish state of the world but confining the action to a single internal space. The location itself might be the most intriguing element, with its decaying, richly lived-in art-deco production design with futuristic technology, but watching a killer cast plucked in the middle and capably bringing color and interest to mostly broad-stroke parts is a major selling point, too. That all of the criminals are nicknamed after their city-named suites is a clever touch, purposely making them all enigmas trying to keep their identities hidden during their stays. As the night goes on, the storm brewing within Hotel Artemis gets just dicey enough, creating a powder-key situation that might be even more dangerous than anything on the outside.

Back to the screen after a five-year hiatus, Jodie Foster gets the most to chew on as the disciplined, no-nonsense Jean Thomas. She’s not only having fun here, acting jittery and taking quick, short steps down halls with her medical bag, but also creates a hardened character grappling with emotional baggage: the death of her son. Out of anyone, she may receive the fullest character arc by the end, overcoming her agoraphobia. Sterling K. Brown (TV’s “This Is Us”) is a magnetic, sympathetic presence as Sherman, a thief just trying to go straight, and it doesn’t hurt that he has charisma and swagger for days. While it was impossible to gauge anything in 2017’s “The Mummy,” Sofia Boutella gets to make a bigger impression, showcasing a femme-fatale glint in her eye and action-star chops as the seductive Nice, whose French nickname contradicts her fierce capabilities, particularly when she dares The Wolf King’s various henchmen to cross her line in a hallway that ends in a breathless 1-to-20 fight. Rounding out the rest of the cast is a terrific Dave Bautista, finding grace notes of humor and loyalty as Jean’s sole associate Everest, who likes reminding others that he’s a healthcare professional; Jenny Slate, who’s not a face one expects to see in an action picture but not given much to do at all or having any real consequence on the story as Morgan; Charlie Day, who has to be smarmy and chew scenery but he’s at least lively; Jeff Goldblum, dropping in briefly to be his deliciously flamboyant self as the ruthless Wolf King; and Zachary Quinto, shading his one-note role a little bit with pathetic insecurity and search for validation as the brutish Crosby. 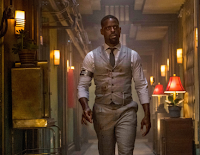 All of the guests in the hotel have something to lose, but there’s not quite enough weight to all of them, excluding Jodie Foster’s Jean Thomas, to feel any great sense of catharsis in the end. While the finished product may not always match writer-director Drew Pearce’s ambitious vision or amount to much, “Hotel Artemis” is a violent, amusingly quirky exercise in style and gleeful archness. Beyond the ace production design and the slick lensing by cinematographer Chung-hoon Chung (2017’s “It”) that gives the interiors of Hotel Artemis scale and geographical coherence, there are also at least two great uses of music (Jean listens to The Mamas & The Papas’ “California Dreamin’” to soothe her anxieties) and another thrilling, brooding, synth-heavy score by the consistently dependable Cliff Martinez. “Hotel Artemis” is satisfying enough as a one-off, but with its delectably designed and detailed accommodations for flimsy characters setting a solid foundation, it does lend itself to checking back in with Mrs. Thomas for more stays and further adventures.