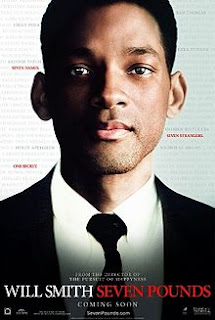 The slow, depressing morality tale "Seven Pounds" stars Will Smith as Ben Thomas, an enigmatic rocket scientist-turned-IRS tax collector seeking redemption. In just the first few minutes, we get a flash-forward of Ben calling 911 and reporting a suicide, his own. 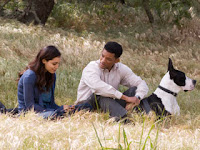 As Grant Nieporte's script unfolds, Ben creeps into seven strangers' lives—including a blind beef salesman (Woody Harrelson), a woman dying of congenital heart failure (Rosario Dawson), and a battered mother of two—and tries helping them in whatever way he knows how, no matter how extraordinary the length he goes. Dawson is soulful and touching as Emily, who knows her death is imminent without a found donor but takes a liking to Ben. Smith essays the heartache of Ben, being the fine actor he is, but can't seem to get a handle on the complex, impenetrable character, nor can we the viewer.

This contrived, “life-affirming” sob story of guilt, redemption, and sacrificial love is presented in nonlinear fashion, but it doesn't take a brain surgeon to figure out where it's ultimately going. Even though it takes much too long to get to its inevitable, hopeless conclusion, the revealing of the central mystery—Ben conceals secrets about his personal tragic past—is unsatisfying.

Good grief, Dawson can cry, there's no arguing that, but since the story feels underdeveloped, it's hard to care as much as we should even when tears are wept. Director Gabriele Muccino (2006's affecting "The Pursuit of Happyness") makes a lot of moments shine between Dawson and Smith that it's a shame some plot points, illogical, manipulative, and outlandish (did someone say jellyfish?), detract from the emotional core of the film.

And what does the title of the movie even mean—seven pounds of flesh, a seven-pound infant, what? Oh thanks, Internet Movie Datebase: it's a “Merchant of Venice” reference to the number of people Ben helps directly.