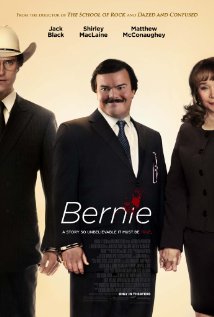 As "Bernie" opens, a title card informs that "what you're fixin' to see is…a true story," referring to a 1998 article in the Texas Monthly by Skip Hollandsworth. Bernhardt "Bernie" Tiede of Carthage, Texas was convicted of first-degree murder for shooting 81-year-old Marjorie Nugent in the back four times and then storing her body in a freezer for nine months. Based on Jack Black's portrayal, Bernie might be the most endearing murderer that ever lived. And under the direction of Texas-born writer-director Richard Linklater (who co-wrote the script with journalist Hollandsworth), "Bernie" almost feels like a dark Coen brothers story inside of a bubbly Christopher Guest mockumentary. Is it a black comedy? A true-crime yarn? A satire? A character study? Or a tragic love story? It's all of the above and yet none of them at all. Without pigeonholing itself into some definite box, the film is a most unusual, darkly amusing, and low-key oddity.

Everyone is drawn to Bernie (Jack Black), a sweet penguin of a man, in the small East Texas town, especially the "DOLs" (dear old ladies). An assistant funeral director whose meticulous work on the bodies has the town regarding him as a "magician," he does other good work around Carthage, including singing in the church choir, reading local obituaries on the radio, directing local musicals, and giving attention to the grieving old ladies who have lost their husbands. A wealthy widow, Marjorie Nugent (Shirley MacLaine), is the town nag, estranged from her sister and even her own children, but she softens her personality as Bernie becomes her faithful companion, taking her to meals and going on expensive vacations. But once her jealousy and slave-driving demands become too much for Bernie, the sweetheart just snaps. For the next nine months, Bernie keeps up the excuses, telling her stock broker she's sick or unable to come to the phone, until her disinherited family and relentless District Attorney Danny Buck Davidson (Matthew McConaughey) suspect foul play.

From the point-of-view of the Carthage townsfolk, "Bernie" tells its stranger-than-fiction story through documentary-style testimonials and a dramatization of Bernie and Marjorie's companionship. The interviews help us believe the cumulative fondness for Bernie. There's some speculation on whether or not the Bernie is a homosexual, as he was effeminate and never romantically involved with any woman including Marjorie. But despite being "a little light in his loafers," Bernie is such a much-loved nice guy that he couldn't possibly be demonized for an ugly crime, especially one concerning a much-hated woman that nobody would mind putting a pillow over her face ("There are people in town that woulda shot her for five dollars"). One woman even states that Bernie only shot Marjorie four times, not five, as if that makes him less guilty. These colorful, gossipy Texans ground the film in reality and give it a small-town flavor. Both real Texas residents and acting professionals (one being McConaughey's mother Kay in a leopard blouse), they all feel close to home, and through them, Linklater's affection for Texas shows.

Jack Black can be a hit-and-miss comedy performer, either making one laugh or grating on the nerves. Maybe it's from reteaming with Linklater after 2003's "School of Rock," but Black dials back all the idiotic shtick, stops just short of caricature, and really plays an actual character in his most complex dramatic performance. From the funny opening where he demonstrates the cosmetization of corpses (i.e. superglue is used to keep the eyes shut and form the mouth into a smile), we can tell Bernie finds joy in his work and overall life. And even after committing the murder, he hasn't an iota of greed in his body. With his trim mustache and trousers buttoned up above his navel, Black creates an irresistibly gentle and sympathetic Bernie that's never judged by the majority of characters or the filmmakers. Shirley MacLaine gets to have fun playing a mean, ornery old bat. Even if Marjorie is more underwritten than she could've been, the actress makes her enough of a human being, with small moments of warmth when she's with Bernie. In the end, you still side with Bernie. Linklater even gets excellent work out of Matthew McConaughey, prone to playing slick lawyers or just taking his shirt off to play smarmy leading men in lame romantic comedies. Here, he's quite funny as Danny Buck who sees Bernie as an actor fooling all of Carthage.

"Bernie" never pretends to be a murder mystery. We know who did it, but Linklater is more cagey about the "why." Like in real life, there are no black-and-white answers. There's a certain grey area to why Bernie killed his companion; he admits to his crime in earnest but even admits to not knowing why. Linklater takes the more shrewdly intriguing approach, blurring the line between documentary and dramatization. Even if everything is bigger in Texas, "Bernie" is a small, entertaining gem.