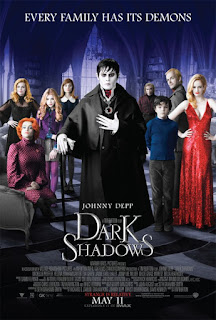 "Dark Shadows" marks the eighth collaboration for eccentric director Tim Burton and his star muse Johnny Depp, so it'd be too easy to say the film recycles their shared love for the dark and weird. But back in Burton's gothic wheelhouse, their latest piece of work is a return to form, following the filmmaker's rare miss (2010's curiously hollow "Alice in Wonderland"). As a fan of the 1966-1971 daytime soap opera that aired on ABC, Burton remains reverent to the straight-faced, melodramatic tone of the cult TV series with shabby production values, and then adds a healthy budget and a dose of tongue-in-cheek humor. Less of a wacky spoof than it is a wonderfully macabre Gothic horror tale, "Dark Shadows" is ghoulish, campy fun, despite an inelegant screenplay.

In the prologue, set in 1761, after the Collins clan relocated from Liverpool to Maine and the parents were tragically killed, son Barnabas Collins (Johnny Depp) became the heir to Collinwood Manor in the fishing town of Collinsport. Deeply in love with Josette (Bella Heathcote), Barnabas spurned servant, one-time lover, and wicked witch Angelique (Eva Green), who used her black magic to do away with Josette and curse Barnabas to be an immortal vampire buried alive. Two hundred years later, Barnabas is unearthed from his long siesta in 1972. The plot proper begins with Victoria Winters (Bella Heathcote, in a dual role), a dead ringer for Barnabas' late Josette, taking a train from New York City into Maine to be the Collins family's governess. The Collinses still inhabit the grand Collinwood estate, but their cannery business has been rivaled by another, which is run by the still-kicking Angelique Bouchard. The steely matriarch, Elizabeth (Michelle Pfeiffer), is initially hestitant about welcoming Barnabas into their home, until realizing he's a vampire (and the paterfamilias) that won't hurt family and shows her the underground family fortune. The rest of the brood consists of Elizabeth's moody, distant 15-year-old daughter Carolyn (Chloë Grace Moretz); her widowed brother Roger (Jonny Lee Miller) and his ghost-seeing son David (Gulliver McGrath); and perpetually hung-over psychiatrist Dr. Hoffman (Helena Bonham Carter) who's not-so-successfully treating David. Once Barnabas meets Victoria, he immediately feels close to her since she so closely resembles Josette. But once Angelique hears of Barnabas' rising from the grave, she'll use black magic (and her sex appeal) to win him over, or else she'll destroy him and his family of descendants.

Without being easily classifiable, "Dark Shadows" arguably never curdles in terms of tone. It sticks to its convictions that of a macabre tale of vampires and witches, and then gets mileage out of the "present" time period for a string of fish-out-of-water jokes. Immediately after ripping apart the necks of construction workers that stumble upon his coffin, Barnabas is hit with culture shock: is that golden (McDonald's) arch a sign of Mephistopheles? "Show yourself, Satan!" he shouts at an incoming car's headlights. Later he stares mesmerized at a red lava lamp, figuring it's an urn of blood, and thinks Karen Carpenter on the telly is a sorcerer ("Reveal yourself, tiny songstress!"). And heavy metal legend Alice Cooper (who, in a cameo on stage, is probably lip-syncing to his 24-year-old self's songs but physically looks like he does in 2012) is the "ugliest woman" he's ever seen. With all that said, the era-based humor would sound silly and dumbed-down, but makes sense in context and most (if not all) earn a chuckle from Depp's delivery and Burton's timing. A joke is made and then he moves on without dawdling on it. And though the film is rarely ever scary, there are some nicely ghastly treats, such as a run-in with dope-smoking hippies that turns deadly and an homage to either Burton's own "Beetlejuice" or 1978's "Halloween" in which someone turns up twice in a doorway with a ghost sheet over them. The deliriously grand climactic showdown with a literally cracked Angelique also brings on the goods.

While much of "Dark Shadows" never ceases to be entertaining, the screenplay by first-timer Seth Grahame-Smith (author of the best-seller "Pride and Prejudice and Zombies" and "Abraham Lincoln: Vampire Hunter") is a mess. The narrative is all over the place that one wishes Burton put more care into the writing and demanded another draft from his tyro scribe. It's almost as if all 1,225 episodes of the original show were cobbled into one movie. Family members' dark secrets are introduced as half-baked, last-minute subplots and characters come and go (hey, the Collins do live in a big house), but had one or two been deleted altogether, the plotting might've felt tighter and more cohesive. And not to split hairs, but how can Barnabas be out in the light with merely sunglasses and an umbrella or wake up from his coffin with barely shaded windows but then burn in the sunlight later?

Other than that, this is a glossy, expensive-looking production. Not only is it another Burton-Depp collaboration, but there's a reason why the film flourishes visually. All pulling their weight, Burton's regulars (costume designer Colleen Atwood, production designer Rick Heinrichs, editor Chris Lebenzon, and composer Danny Elfman) work their magic. In particular, Heinrichs' design is gorgeously textured and finely detailed, especially compared to the depersonalized backlot look of Burton's 2001 rethink of "Planet of the Apes." Exterior shots in the UK have a spooky, old-fashioned atmosphere, evoking the classic Hammer monster movies of decades past. The Collins Manor is a cross between the Haunted Mansion in Disney World and Edward Scissorhands's hilltop castle. (Victoria's walk through the gates and up the long path to the family's mansion actually reminds of when Dianne Weist's Avon lady Peg went calling at Edward's door.) And the rococo, kitschy decor of stores in the town of Collinsport (with "Superfly" and "Deliverance" seen on movie theater marquees) and knick-knacks inside the Collins' manor (Lava lamps! Plant macramés! Troll dolls!) lend a relevant wink to the flower-power-infused '70s era, as do The Moody Blues' "Nights in White Satin" and The Carpenters' "Top of the World" on the soundtrack.

From Edward Scissorhands to Ed Wood to Willy Wonka and Sweeney Todd, Depp has created some of the most indelibly odd characters, especially when working with helmer Burton. It's a surprise he's never played a vampire heretofore as Barnabas Collins, once played by the recently deceased Jonathan Frid (who appears briefly). With his glowing, ghostly-white facial palette and Nosferatu fingernails, he's clearly having a ball and even beneath the surface of a fanged murderer, Depp makes him a family-first gentleman. With the impressive roster of acting talent, "Dark Shadows" would seem to be an ensemble piece, but it's really Depp's Pee-Wee playhouse. Still, a va-va-voomy Green deliciously sinks her teeth into the vampy role, playing Angelique as a kinky vixen (or "the whore of Beelzebub" as Barnabas puts it) with a demonic, hell-bent smile. When Angelique tries seducing Barnabas in her office, the two actors have a cheeky chemistry together and (with the help of wirework and special effects, of course) have fun scratching a few sofas and breaking glass in a rather gymnastic sex scene, with the aftermath looking like a cyclone came through.

The rest of the actors are all dressed in Atwood's costumes and ready to go, and they all have "Addams Family" quirks, but the script often has trouble finding them enough business to do. The always-mesmeric Michelle Pfeiffer knowingly channels a "Days of Our Lives"-type earnestness; Chloë Grace Moretz amusingly sneers at her family when she can't just dance and listen to her records at dinner; and Helena Bonham Carter (the most inspired thing in "Alice in Wonderland") sports flaming-red hair and whips off some hung-over shtick. Jonny Lee Miller and Gully McGrath are given the short end of the deal, mostly showing up at the breakfast and dinner table, but in one of their cases has a semi-important place in the third act. In dual roles as both Josette and Victoria, Bella Heathcote is alluring with her moon eyes, but her latter character disappears for long stretches and curiously doesn't do much as a governess. Jackie Earle Haley adds amusement as the Collins' caretaker Willie, who becomes the old master's toady. Hammer Film horror veteran Christopher Lee even has a scene as a crusty sea salt. Without spoofing up their characters, the cast's overall styling of acting is appropriately stone-faced and melodramatic, and it works.

Even if the script is a bit unwieldy, Burton makes "Dark Shadows" all his own. Not by any measure is it "Edward Scissorhands" (or "Beetlejuice" and "Ed Wood" for that matter), but it's his best work to date since 2007's "Sweeney Todd: The Demon Barber of Fleet Street." Being characteristically kooky and imaginative, Burton's vision breathes enough life into a long-dead TV series and carves itself a new place for the filmmaker's pantheon of the gothic and deliciously weird. There's plenty to recommend here in Burton Land.