Stripped-down "Entrance" burrows under your skin 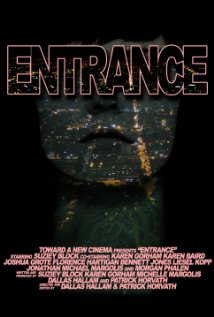 Entrance (2012)
83 min., not rated.
Writer-directors Dallas Richard Hallam and Patrick Horvath refer to their film "Entrance" as mumblecore with stakes, and as such, it's a great piece of work. Micro-budgeted and stripped-down, these filmmakers' collaboration makes waiting worth it. For a couple of guys that made the move to Hollywood and worked all sorts of production jobs, "Entrance" stands as a calling card for filmmakers that know exactly what they're doing.
Suzy (Suziey Block) is going through the motions. She shares a cozy Los Angeles apartment—off the porch, there's a gorgeous view—with a roommate (Karen Gorham), but trouble with her car forces her to walk everywhere and her barista job is less than desirable. Every day is the same: Suzy wakes up, makes her coffee, feeds her dog Darryl, puts on her make-up, and goes out the door to the coffeehouse. Once Darryl goes missing, her whole life changes. And when she gets ready to make her move out of La La Land, something that she never saw was there creeps into her field of vision.

Neither one more found-footage item to cross off the list nor a straight-up horror pic, "Entrance" feels like its own entity. What might seem like uneventful cinéma vérité (or mumblecore) is only the crafty, mono-focused, and riveting build-up, grounded by the apparent normalcy of one unhappy young woman's banal day-to-day life, for something terrifying as it is plausible. Hallam and Horvath aren't pretentious that they have to include uncut versions of Suzy's daily routine every time, but show us just enough that life in the big city is like anyone else's workaday ritual. Along the way, the filmmakers slowly divide out nuggets of paranoia and little details, thanks to sound design and Hallam's framing. Once we realize danger in Suzy's periphery lies ahead, even a common walk down the street is fraught with unease and nervous anticipation.

The real dread unspooled not until the third act never comes as an abrupt about-face; in a way, the dread was always there. While potentially unsatisfying to those that need complete closure on a literal level, the last shot holds the most impact as it makes perfect sense for the film's running theme. It's a universal emotion to feel loneliness living in a big city, especially with society's unpredictable cruelties. By the end, when she's ready to enter her new life somewhere else, Suzy can't help but remain stuck with even more bad luck on her shoulder. Suziey Block, an unknown but a fresh face, is so honest, relatable, and appealing as Suzy. And that's a relief because the camera never leaves her, tracking Suzy as she goes about her predictable day and later finds herself in a most distressing situation.
Watching the overly revealing trailer, reading up on it, or even listing off other films that it somewhat mirrors in its offhand final act would blunt this particular film's impact. Like the greatest kind of films, "Entrance" burrows under your skin. It should teach you to never stay in your apartment or house alone.