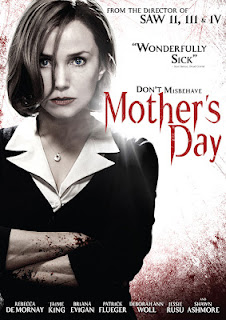 Mother's Day (2012)
108 min., rated R.
With the poor climate of horror remakes these days, the prospect of remaking Charles Kaufman's grimy, technically inept 1980 Troma exploitation item "Mother's Day" seemed dubious. Only this "Mother's Day" is a taut, intense, cut-to-the-bone home-invasion thriller that survives on its own two feet. Being in name only, it has more in common with 2008's "The Strangers" and "Funny Games." And despite being delayed in release, this remake is more confidently made and modernizes its sleazy source material without going soft or feeling gratuitous. 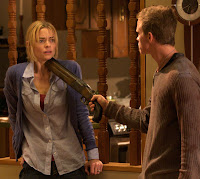 In this lean and mean anti-Hallmark Card suspenser, the sadistic Koffin brothers (Patrick Flueger, Warren Kole) drag their younger brother (Matt O'Leary), who's been shot after a botched bank robbery, to their mom's house seeking refuge, just as a storm is on the rise. But they realize the house has been foreclosed on and now has a new set of owners, Beth (Jaime King) and Daniel Sohapi (Frank Grillo), who are having a birthday party with six friends. The brothers had sent their mother money for the last couple months, but it's now in the couple's house. Then when dear old Mother (Rebecca De Mornay) hears about it, she makes sure the hostages follow her rules. But if they misbehave, Mama will make sure they face the consequences.
Efficiently directed like a wind-up toy by Darren Lynn Bousman ("Saw II-IV" and 2008's dreary "Repo! The Genetic Opera"), "Mother's Day" keeps you right on edge and takes no prisoners with its savage, punishing games of physical and emotional torment. After this, no one's going to want to touch a pot of hot water. Recalling the survival mind-games of "Saw's" Jigsaw, one violent, twisted moment involving two drunk party girls (A.J. Cook, Alex Vega) waiting in line at an ATM machine and how low they'll go to stay alive is memorably sick. Bousman has surely learned since his work on the "Saw" movies that you can still create suspense and nerve-jangling tension by holding a camera more still and not employing whiplash-inducing flash cuts.

Newbie screenwriter Scott Milam brings more characterization than what is usually expected from this sort of film that few characters are streamlined to be just good or bad. Character backstory, especially that of Beth and Daniel, is nicely woven into the story to give them arcs. However, prior to them becoming hostages so quickly, more screen time could've been dedicated to developing the friendships between the eight characters, including George the young doctor (Shawn Ashmore) and the tough Treshawn (Lyriq Bent). Like in most films of its type, a few characters make rash decisions, which usually ends in them getting killed or pulled back into the house. When single mom Melissa (Jessie Rusu) runs off to try and escape, Mother amusingly scoffs with, "Is she always this impulsive?"

For a B-thriller, the performances are adequate at best and bland at worst. King and Grillo do their best fleshing out Beth and Daniel, whose strained marriage comes to the fore amidst all the carnage. Briana Evigan makes a credible tough cookie as tatted Annette, and other lesser known actors are either just plot points or add to the body count. Still, it's refreshing that the characters being terrorized aren't brain-dead teens but working adults and, interestingly, some of them sell out their friends to live. As lead criminal Ike, Flueger is authoritative and believably hardened, and Kole is menacing when he's not chewing the scenery, playing his unpredictable brother Addley. They're outwardly deranged, but remain loyal to their mama. Deborah Ann Woll initially earns some empathy as the sheltered Lydia, Mrs. Koffin's only daughter, who fears a malevolent woman known as Queenie lurking outside (or says Mother). Not given a role this juicy since 1992's "The Hand That Rocks the Cradle," Rebecca De Mornay is simply sensational and without a doubt the film's greatest weapon. (In some ways, Mother could be a continuation of her demented nanny Peyton.) Her Mother is maternal, funny, unhinged, touching, malicious, and quietly menacing all at once without going over the top. Even when she loses her cool, De Mornay is still chillingly soft-spoken and holds onto her "family values."
A hospital-set prologue, where Mother snatches up a baby from the nursery, briskly sets the scene before its plot proper and comes full circle by the end. Aside from an anticlimactic capper, "Mother's Day" is a devilish surprise, sure to please horror buffs and anyone in the mood for an unthinkably nasty thrill. But keep Mom at home.