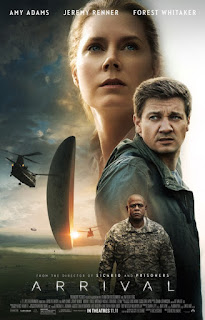 Made evident by his excellent and distinctly different last three films (2013’s “Prisoners,” 2014’s “Enemy” and 2015’s “Sicario”), Denis Villeneuve has the vision of a filmmaker who knows exactly what he is doing and never talks down to his audience. He always goes the route of retaining his artistic integrity rather than giving in to commercial convention. Adapted from Ted Chiang’s 1998 short story “Story of Your Life” by screenwriter Eric Heisserer (2016’s “Lights Out”), “Arrival” is ambitious and entrancingly mounted, an event of thinking-person’s science fiction that’s as much of an existential and language study as it is about the human condition. Not attempted often enough in the Hollywood studio system, it has so much in its heart but also far more on its mind than most genre offerings about an alien invasion without being coolly detached and merely cerebral.

Following the untimely death of her 12-year-old daughter, linguistics professor Dr. Louise Banks (Amy Adams) walks through a proverbial fog. On a seemingly ordinary day, she goes into her lecture hall to teach, but as her students’ cell phones start blowing up with breaking news, Louise finally turns on the TV to discover the world in a state of emergency. Twelve objects are seen hovering all over the world. When she is approached by Colonel Weber (Forest Whitaker), Louise is asked translate a recorded message from an alien species, but that’s only the beginning. Before long, Louise is picked up in the middle of the night from her lakeside home in a helicopter. Along with mathematician Ian Donnelly (Jeremy Renner), they land at a military camp in Montana. Communicating with the alien heptapods that reside in those UFOs will first mean decoding their language and then discovering the purpose of the invaders’ visit. Why are they here? Do they even understand a question?

“Arrival” synthesizes its emotions and philosophical ideas with an elegiac, artistically restrained mood and every cinematic accomplishment working to the highest order. Insisting on never dumbing things down and really respecting his audience’s intelligence, the film can be as fascinatingly cagey as anything in Denis Villeneuve’s oeuvre, but he excels at telling a story that works on multiple levels, affecting the heart next to challenging the brain. The storytelling is not 100% linear, blurring the divisions between time and memory, beginnings and endings, and yet, it’s circular and smartly handled. What comes at the end initially feels jarring and almost rushed, ready to make an emotional impact, however, on second thought, it is so much more fluidly constructed, thoughtfully considered and surprising than the equivalent of a magic trick. The film might lose viewers who reject paying attention or doing any of the legwork—there is a lot of scientific process without any of it coming across as unnatural exposition—but Villeneuve assures that all will be clarified, or at least suggested, and still leave something to ponder and evaluate with repeat viewings.

Eloquently composed from the first frame by DP Bradford Young (2013’s “Ain’t Them Body Saints”), the film is rich with palpable portent and hope. The early scenes of Louise and her students watching live coverage of what’s going on outside is eerie, evoking the feeling of confusion and panic in a closed classroom during 9/11. There is an alluring, stunningly ominous stillness to the sight of the oval-shaped vessels hovering just above the ground. The first time Louise, Ian, Colonel Weber, and the rest of their team enter the extraterrestrial ship, leaping upward with a shift in gravity and walking down a long hallway to a glass window full of light and smoke, is breathlessly tense and does truly inspire awe and wonder. There’s also an underwater effect in the heptapods’ ship that is unlike anything else. Guiding Villeneuve’s own cinematic language further are the superb technical merits and a chillingly ethereal music score composed by Jóhann Jóhannsson, as well as the mournful, incredibly moving use of Max Richter’s composition “On the Nature of Daylight.”

Never one to strike a false beat, Amy Adams is understated and powerful as Dr. Louise Banks, layering a lonely woman who’s recovering from her personal loss and doing the best she can. When she is one of the few people who can help in a global emergency, Louise must use her expertise and open-mindedness. Fatigued and overworked, she also keeps slipping in between the present and her memories, hearing and seeing her daughter. It’s a mesmerizingly internal performance to which Adams brings warmth and compassion, tender vulnerability, laser-focused passion, and commanding gravitas. Jeremy Renner provides much-needed levity and a calming magnetism as Ian. As Louise and Ian work closely together, it becomes their common goal to learn the alien beings’ Rorschach inkblot-like language and even take enjoyment in their work by dubbing the two creatures “Abbott and Costello.” As it were, their discoveries are ours.

Thematically more in step with “Contact,” Signs,” and “Interstellar” than “Independence Day” or “War of the Worlds,” “Arrival” is a tingly rarity in science fiction that doesn’t come around every year. To those predisposed to expecting a sci-fi film with fast thrills and alien slime, it could be seen as ponderous or maybe even head-scratching. Instead, one should open their mind to what Villeneuve does differently with a methodic build and lofty ambition that reward with stimulating payoff. Patient and ruminative, poignant and achingly human, “Arrival” stands tall as another lingering achievement from a thrillingly original filmmaker.