Formulaic "No Strings Attached" sweeter and funnier than most 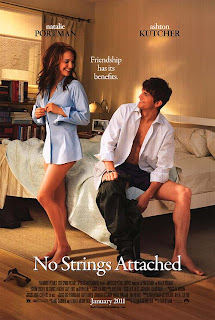 As of late, the romantic comedy genre has been lazy and fallible. It's only January, a month before Valentine's Day and a movie landfill, but "No Strings Attached" works as a sweet, fun, and funny representative of a 2010s romantic-comedy with a randy streak. No physical pratfalls, but the stars sure do get physical, and no surprises, but the premise sure is surprisingly sexually blunt. Snappily written by Elizabeth Meriwether and confidently directed by comedy vet Ivan Reitman, this is an enjoyable and pleasantly ribald rom-com.

Adam (Ashton Kutcher) and Emma (Natalie Portman) met in junior high summer camp, and over the years their paths intersect. Now both in L.A., he's a production assistant on a "Glee"-type TV show and she's a medical intern at a hospital who wears her belief of “monogamy goes against our basic biology” on her sleeve. When Adam wakes up one morning on Emma's couch, he agrees to her idea of having no-strings sex anytime and anywhere as friends with benefits. No morning breakfasts, no cuddling, no emotional involvement, just boinking. They're both good lays, but eventually Adam gets closer to Emma than she'd like, as she's not ready for that next step.

Portman and Kutcher, both attractive camera subjects, jell on screen as a couple by creating a nice chemistry and a down-and-dirty ease in the bedroom. Emma is written somewhat erratically (why exactly isn't she affectionate and doesn't like to commit?), but the versatile Portman is comfortable being loose and is surely having fun after losing her marbles and breaking her toenails in "Black Swan." She often shows up Kutcher, who's more of a Mr. Popular on Twitter than an actor, but he's charming and touchy-feely here, less of a lost puppy and not as unctuous as he has been in other rom-com roles.

The pro supporting players of sidekicks and best friends serve as a big plus and never miss a beat, particularly mumblecore darling Greta Gerwig lovable as Emma's truth-telling friend and fellow med student; the perfectly deadpan Mindy Kaling as another roommate; and Jake Johnson comically sharp as Adam's goofy roomie. Also, we have Kevin Kline (directed almost two decades ago by Reitman in "Dave") who's amusingly sleazy as Adam's father, a former child star who smokes pot and goes after his son's girlfriends, but even gives the character some shadings. Chris 'Ludacris' Bridges has some laughs as another one of Adam's wisecracking buddies, and Lake Bell is cringingly good as Adam's clingy, neurotic TV colleague. Frustratingly filling out the edges, some throwaways exist in Olivia Thirlby as Emma's younger sister and Cary Elwes, who might pose a complication as a doctor but nothing really comes of him as he's mostly in the background.

Familiar of last year's "Love & Other Drugs" minus the disease and spawning a pattern with "Friends With Benefits" being released in about six months, the friends-with-benefits premise is just edgy enough to be a little offbeat and reflect our salty times. It gets its laughs and earns its romance without going for the really bad clichés. "No Strings Attached" doesn't exactly rewrite the rule books, but it's more about the journey than the obvious destination as the guy-gets-girl tradition goes, and for that it's worth a little attachment.