Trite "Art" gets by on account of strong cast 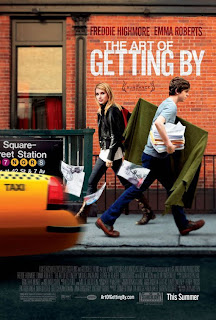 Originally titled "Homework" when debuting at the Sundance Film Festival, writer-director Gavin Wiesen's "The Art of Getting By" has Hipster Indie Syndrome hung high above its head, but still manages to get by from strong character work by its fine cast and a work-with-whatcha-got sensibility. It's hard being a trite, familiar coming-of-age indie film after all.

Mostly perfecting an American accent, Freddie Highmore (no longer an earnest, wide-eyed Charlie Bucket) plays George, a bright, fatalistic young man who attends a private prep school in Manhattan but chooses not to apply himself. He sees no point in doing anything, especially homework, because he's going to die at some point anyway, cynically abiding by the quote: "We live alone. We die alone. Everything else is an illusion." He sketches during class rather than paying attention or handing in assignments on time; he skips class; and he's constantly called to the office of the principal (Blair Underwood), who has a hard time giving up on him. When George helps a cute, popular girl named Sally (Emma Roberts) by taking the blame for smoking on the school rooftop, they become companions and she tries coaxing him out of his existential crisis. Matters don't help on the homefront for either teen—George's mother (Rita Wilson) and stepfather (Sam Robards) have money problems and Sally's single mom (Elizabeth Reaser) is an alcoholic tease.

"The Art of Getting By" is uneven, Wiesen showing freshman-effort naivete in terms of writing and directing, but the actors fill their characters with more nuances than what the material allows. Highmore has quite the challenge. His George is a self-proclaimed misanthrope who just seems like a pretentious, disrespectful slacker. But once over, he's really just a sensitive, troubled, wise young man. Though dressed in a quirky homeless-man overcoat and a smoker, George isn't just another Holden Caulfield, standing for teenage rebellion and angst. As popular-girl-who's-tired-of-being-popular Sally, Roberts has an easy screen presence and she works out what she can from such a shallow, inconsistent character. For instance, she smart-mouths her cocky ex-boyfriend, but then once at the club on New Year's Eve, she grinds with him without hesitation, thus leaving George in the dust (or in a puddle of his own binge-drinking puke on the sidewalk). Or, when she makes George feel small and refocuses her attention on Dustin (Michael Angarano), a recent graduate from their school who's making his way as an artist.

Angarano, by the way, is quite amusing and decidedly unstereotypical in the "other guy" role who respects George as a friend. Daughter of Steven, Sasha Spielberg, stands out as one of Sally's compassionate cool-kid friends, even if she has about four scenes. Looking haggard but feeling more rawly authentic for it, Wilson is wonderfully warm and firm as Vivian. No fault of Reaser's, but her character falls into the margins. Alicia Silverstone of "Clueless" also shows up on the other side of the classroom as George's English teacher who sees potential in him. Her presence has the comfort of seeing an old face.

With a resource-limited film as this, there are sloppy mistakes, like shots of the New York streets decorated with Christmas twinkle lights for the holiday season oddly lacking snow. And 18-year-old high school seniors being served alcohol at the bars without any flash of an I.D.? As if! But the alt-rock soundtrack is easy listening (including selections by The Shins, Clap Your Hands Say Yeah, and Leonard Cohen) and the cold, crisp air of N.Y. is palpable through the lens of cinematographer Ben Kutchins' camera. There's nothing fresh or surprising about the plot points that push "The Art of Getting By" to its final moments of homework cramming, familial embrace, and boy-gets-girl (whoops, were those spoilers?), but there's something endearing here about this scrappy indie. When you at least care at the end of a story you've heard before, writer-director Wiesen has done half of his homework.