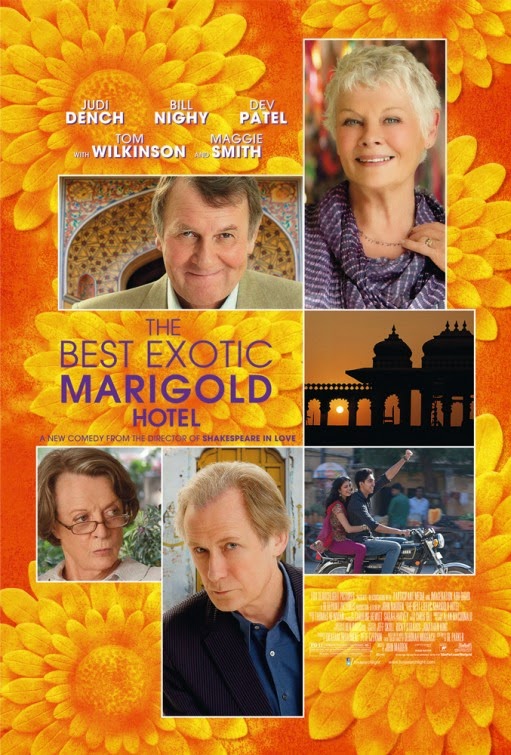 Who knew watching a bunch of golden-agers strut their experience on screen could be refreshing to watch? With a cast of British acting royalty in "The Best Exotic Marigold Hotel," this is catnip for the pensionable senior set, a patent target audience that lately seems too often underserved. What sly counter-programming against "The Avengers," as older folks will have a reason to go to the theater if they have no interest in seeing the Hulk do some incredible smashing with his superhero allies. Like 2003's old-English-ladies-going-full-monty comedy "Calendar Girls," this film is a gentle, cozily satisfying escape, but cynics should stay home. Sometimes cinematic comfort food is just enough, especially when there are classy British vets on board.

A disparate group of English retirees, all from different walks of life, face troubles in their current lives and (coincidentally) all depart to the Best Exotic Marigold Hotel, a hotel "for the elderly and beautiful" in Jaipur, India. Recently widowed Evelyn Greenslade (Judi Dench) sells her home to cover her husband's debts and hopes to put down roots in a new place. High court judge Graham Dashwood (Tom Wilkinson) decides it's finally time to retire and retreat back to India, where he lived for the first 18 years of his life. Civil Douglas (Bill Nighy) and tight-pantied Jean Ainslie (Penelope Wilton) have been married for 39 years, but can't afford a retirement flat that's to the better half's liking. Crotchety, racist ex-housekeeper Muriel Donnelly (Maggie Smith) is bound in a wheelchair and needs a hip replacement fast, so she's outsourced to India. Lonely lothario Norman Cousins (Ronald Pickup) claims to "still got it" and hopes to find a new woman. Oft-married Madge Hardcastle (Celia Imrie) leaves her daughter's home to go find herself another husband. Each of them hope to find what they're looking for in Jaipur as the first guests of young, eager-to-please proprietor Sonny Kapoor's (Dev Patel) crumbling hotel, which looks more luxurious in the brochures. Some of them readily adjust to their new lives and others resist the foreign city, but as Sonny's motto goes, "everything will be all right in the end…if it's not all right, then it's not the end."

Unobtrusively directed by John Madden (2011's "The Debt") and adapted by Ol Parker (2005's "Imagine Me & You) from Deborah Moggach's novel These Foolish Things, "The Best Exotic Marigold Hotel" manages to coast along on the good will of its dream thespians who are like miracle workers in bringing the slight script to life. These old pros are engaging and such fun to watch. The wonderful Dame Judi Dench creates the most empathy in Evelyn, who feels grief and loneliness after her husband being gone, with her innate grace and lovely presence. Tom Wilkinson is also quite moving as Graham, who devotes his trip to India to reuniting with the man he loved long ago. Bill Nighy and Penelope Wilton are total opposites as married couple Douglas and Jean that you can't imagine them lasting; the former works up his usual likable personality and the latter attaches enough dimension to a pretty shrewish part as a woman so frigid and unhappy. It's Maggie Smith, who seems to be having the most fun as bitter old Muriel, who packs jars of pickles in her suitcase, and turns out to dispense all the sage advice to her fellow elders. Celia Imrie and Ronald Pickup seem to have the least to work with, her Madge and his Norman the frisky ones of the bunch, but they also add the most amusement. On the other hand, "Slumdog Millionaire" star Dev Patel overplays the role of Sonny, ingratiating and enthusiastic but mostly just hyper. More appealing is Tena Desae, as Sonny's girlfriend Sunaina, who works as a customer service rep (the same place Evelyn ends up finding a job) but might not measure up to Sonny's demanding mother's standards.

Too innocuous and pat, "The Best Exotic Marigold Hotel" is nevertheless charming as the day is long. It may not be edgy or unpredictable, but it knows its audience without having to pander or condescend. Some of the crowd-pleasing generational laughs are scattershot: trips to the bathroom after spicy Indian food! Viagra jokes, ho ho! Sonny's girlfriend slips into the wrong bed for a late-night tryst, hehe! Still, director Madden and the acting vets make sure none of the amusing moments are overplayed nor overshadow the characters' sad truths. Attractively lensed on location by cinematographer Ben Davis, the film vividly captures the poverty-stricken sights and hustling-and-bustling sounds of India without becoming a postcard-pretty travelogue. Although a death occurs and one character makes a life-changing decision in the third act, the story happenings are wrapped up too tidily in a fairy tale-ish conclusion. Sonny's philosophy, "Everything will be all right in the end," is treated a little too idealistically. That gives way to a metaphorical bird taking flight and romantic pairings clicking into place, two hokey and formulaic moments that the film might've felt more real without. However, it's tough to really complain when Dench and company know how to play their scenes with wit, subtlety, and real humanity, even when the script goes out of its way to form a neat, feel-good little package. "The Best Exotic Marigold Hotel" is as pleasantly safe and tranquil as a cup of Builder's tea, and on that level, it's a delight. It's the kind of movie you can take your mother to see, and she'll definitely have a great time.