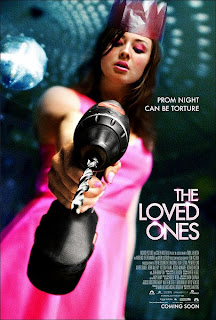 Pretend Molly Ringwald turned out to be a psychotic loon after she snagged the guy in "Pretty in Pink," for the sake of getting the premise of "The Loved Ones," an insanely twisted and amusingly morbid love-hurts horror import from Australia. The cute-as-a-peach Robin McLeavy's sad loneliness as a spurned teen named Lola turns into creepy, hellish zeal. She's desperate, weird, disturbing, and scary as hell. Once Lola asks her crush, Brent (Xavier Samuel), to prom, he politely rejects her. Brent already has a girlfriend, Holly (Victoria Thaine), and he lost his dad in a car accident six months ago. So Lola's Daddy (John Brumpton), a sicko himself, kidnaps Brent so his princess can have a little torture play (after his larynx is paralyzed from an injection). Oh, and they keep Lola's ex-frogs as cannibalistic skeletons in a chamber under the floor. Hell hath no fury like a prom queen scorned.

Documentary short filmmaker Sean Byrne makes his feature debut and first writing credit with "The Loved Ones." He shows a highly confident hand for staging the crazy, over-the-top carnage. The sensationalism is “torture porn” but pretty clever on that count, and Byrne brings it a demented sense of black comedy. Recalling "Carrie," "Misery," and "Audition," the movie is like a feature-length version of the dinner scene in "The Texas Chainsaw Massacre." It becomes mighty apparent that Byrne's material is thin, as the action intercuts to a futile subplot with Brent's goofy best friend on a date with a gothic chick. But "The Loved Ones" truly goes into high gear and really goes there with the gasps, jolts, and nervous giggles.

McLeavy and Brumpton make a demented pair to remember. Their weird, incestuous relationship is hard to stomach, but then that's the point, and so are the wince-inducing scenes with a power drill, a hammer and knife, a glass of milk, and burning laundry soap. "The Loved Ones" is not only a bracingly violent and icky horror film but also a mean black comedy and heartbreaking teen angst story with a side of crazy. Kasey Chambers' lighthearted tune “Not Pretty Enough” (Lola's favorite) will even stick with you from its creepy use. Those Aussies might need some psychiatric help down the road, but depravity-heads who crave extreme horror will dig this relentless, gleefully sick gem. The less daring viewer should stay far away.