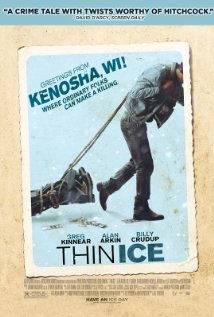 Thin Ice (2012)
93 min., rated R.
When it was originally screened at 2011's Sundance Film Festival, "Thin Ice" was then titled "The Convincer" by writer-director Jill Sprecher and her co-writing sister Karen Sprecher (2001's "Thirteen Conversations About One Thing"). The studio Werc Werk Works and distributors from ATO Pictures then demanded changes, which Sprecher reportedly refused, but the studio and distributors went ahead without the filmmaker's input. Despite the re-edits, which cut 20 minutes, rearranged the structure, and added a new music score, "Thin Ice" remains a familiar albeit enjoyable Midwest-set crime caper.

Greg Kinnear stars as Mickey Prohaska, an unethical, opportunistic insurance salesman in snowy Kenosha, Wisconsin, with the crummiest of luck. He's deep in debt from having a bit of a gambling problem and separated from his wife (Lea Thompson). At an insurance convention, Mickey meets naive guy named Bob Egan (David Harbour) and offers him more commission at his small business, just so he can steal his prospects. One policy contact is senile farmer Gorvy Hauer (Alan Arkin), who apparently has no valuables, except a dog named Petey, but then Mickey discovers a $30,000 estimate on an old violin that he could sell himself. Once locksmith Randy (Billy Crudup) comes to Gorvy's house to install a security alarm, Kinnear gets himself in way over with his head and selling the violin to pay off his debts becomes less of a priority. And since "Thin Ice" is a con movie, nothing is what it seems.

A big part of what makes "Thin Ice" click is its engaging cast. Greg Kinnear always gets away playing glib, duplicitous characters since he has such a louche, grinning charisma, and that's what the actor does with the flawed and desperate Mickey. But it's Billy Crudup who turns in a hilariously odd, live-wire performance as the enigmatic Randy; watch as he angrily bashes a Drumstick ice cream cone repeatedly against Mickey's car dashboard. As the doddering Gorvy, Alan Arkin (with a European accent) has an unmindful charm and unexpected heart, especially a scene involving his doggy. Lea Thompson was missed on the screen, here playing Mickey's long-suffering wife Jo Ann, but once the plot gets going, she disappears. Bob Balaban also shows up, bringing an amusing kookiness to the supporting role of a luthier. Jeff Schoen's production design also gets down the look and feel of Wisconsin, and Dick Pope's cinematography makes the frigidity of the chilly weather palpable.

Filmmakers Jill and Karen Sprecher have crafted a tight, clever script. The dialogue is crisp enough, and there's a surprising trick up the film's sleeve in its third act, even if there's an air of familiarity about it. The Coen brothers' "Fargo" and Sam Raimi's "A Simple Plan" both come to mind a lot of the time. For instance, said trick has been executed before and it mostly works again, but one feels the Sprecher sisters could've found a way to make it gel rather than just spring a big scheme on the audience. Perhaps it deserves an instant rewind once you hear the twist, but "Thin Ice" has enough to recommend it as demented fun that the controversial rearranagements go largely unnoticed.