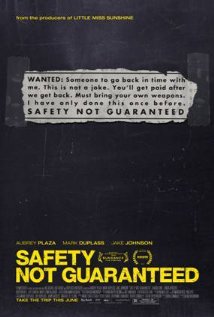 What if you read a classified ad about someone seeking to travel back in time? Would you instantly call b.s.? Filmmaking newcomer Colin Trevorrow was inspired by a real classified ad placed in a 1997 Backwoods Home Magazine, someone asking to be accompanied in a time-travel mission, that turned into an Internet meme. Making their feature debuts, screenwriter Derek Connolly and director Trevorrow use the ad as a jumping-off point for "Safety Not Guaranteed," a slight but offbeat, likable, engaging comedy that seams a road movie, science fiction, and a misfit romance into an oddball mix. It's a very small, modestly budgeted mix of a movie, being independently distributed by FilmDistrict, that's more satisfying than most bigger, louder blockbusters. And it helps to have producers Jay and Mark Duplass in its corner, Mark also taking the on-screen role of the potentially insane adman.

Interning at a Seattle magazine, disaffected, antisocial Darius (Aubrey Plaza) jumps at the chance to do a human-interest piece regarding a newspaper classified ad. The strange ad reads "Wanted: Somebody to go back in time. This is not a joke. You'll get paid after we get back. Must bring your own weapons. I have only done this once before. Safety not guaranteed." Darius, along with smarmy, cynical journalist Jeff (Jake Johnson) and fellow intern Arnau (Karan Soni), a virginal Indian, travel to Ocean View, WA, in search of the ad's author. As it turns out, Jeff's real motivation on their work trip is to hook up with a former fling, which leaves Darius to go rogue and do most of the work. Pretending to answer his ad, she tracks down the kook named Kenneth (Mark Duplass) at his grocery-store work, and as he believes her to be equally serious in a time-traveling excursion back to 2001, Darius finds a real kindred spirit in the paranoid guy. But are government agents really after Kenneth?

At first glance, "Safety Not Guaranteed" looks like it could be just another self-consciously quirky indie, but the directions it takes are sneaky. Connolly's script is witty and fresh, and Trevorrow's direction so low-key and unpushy that the film is guaranteed to charm. Darius and Kenneth develop such a mutual trust that their misfit romance grows on the viewer. This is one of those movies where one character is basically playing the other to write a story, but Darius and Kenneth are well-defined as characters and share a connection that grows deeper the more the story progresses. Even if Kenneth might not be right in the head (or maybe he is), Connolly and Trevorrow keep one guessing.

With her adorably glaring eyes and deadpan comic timing, Aubrey Plaza might not yet be a household name, but deserves to be after her first lead role. Known for her dryly sarcastic shtick in TV's "Parks and Recreation," Plaza delivers much of that Daria persona, but also gets to show a softer, more vulnerable side in the part of Darius. She has a cynical view of herself, but beneath that surface is a sadness and a guilt. When we first meet Darius, she's a morose wallflower who has never been able to blend in with the crowd. Then when she meets Kenneth, who leads her through gun practice and forest runs, a smile emerges on her face, and it feels like a breakthrough. Darius can't believe she's actually falling in love with this man. She not only becomes an accomplice in Kenneth's stealing of lasers from a tech research lab to build his time machine, but opens up and tells him that she'd travel back to stop her mother from dying when she was 14.

Right behind Plaza is the lately-ubiquitous Mark Duplass, who continues to impress as an actor (you can also see him in "Your Sister's Sister"). He has a shaggy, lumpy look that's lovable and appealing, and adds a sincere sweetness to the "is-he-crazy-or-isn't-he?" character of Kenneth. In the part of Jeff, Jake Johnson is perfectly smarmy, getting in his jerky wisecracks. When Kenneth comes face to face with Jeff, he tells the glib narcissist that he doesn't know about pain and regret, but that moment is countered by Jeff's own rekindling romance with former flame Liz (a very naturally beautiful Jenica Bergere) that doesn't completely go as planned. Karan Soni gets the least to do, but he's quietly endearing and still supplies his Arnau with a tidy arc (hint: he's a virgin from the start). And in a surprising cameo, Kristen Bell shows up.

The film takes few wrong steps, but although its shaggy-dog-story conclusion is just ambiguous enough, it pokes a glaring hole in Kenneth's murky M.O. for traveling back to 2001. Until then, "Safety Not Guaranteed" is grounded in reality and balances its life-affirming take on the human condition with some time-travel loopiness. It's droll and sweetly gentle without a cheap laugh and without getting sentimental. Once you're done being won over, you'll immediately want to go back in time and experience it again. Wanted: more audiences to check out this scrappy little sleeper of a movie.