New to DVD/Blu-ray: "Ghost Rider: Spirit of Vengeance" not quite a flaming pile but not much fun either 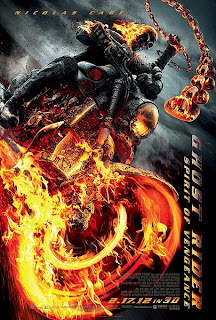 2007's campily crummy but not-über-bad "Ghost Rider" went down in flames and out of everyone's memory, but Nicolas Cage sold his soul to the Marvel franchise, so we're damned with another helping of fire-blazing. If it were up to anyone to improve on such a property, it would seem to be directors Mark Neveldine and Brian Taylor (known as Neveldine/Taylor), who made the "Crank" movies, but they've been tamed by the studio's insisting of a more accessible PG-13 rating. Even if the sequel/re-imagining "Ghost Rider: Spirit of Vengeance" isn't close to resembling "good," it just barely fares better than its predecessor if nothing else. Unfortunately, hopes of seeing a dizzily fun guilty pleasure are dashed.

As a little catch-up, former stunt rider Johnny Blaze (Nicolas Cage) sold his soul to the devil for the life of his dying father, but the pact came at a price: He has a demon known as The Rider inside him. The plot proper begins with Blaze hiding out in Eastern Europe and then being visited by an alcoholic French monk named Moreau (Idris Elba). He convinces Blaze to save a boy, Danny (Fergus Riordan), and his mother, Nadya (Violante Placido), on the run from SUV-driving goons, including her ex-lover Carrigan (Johnny Whitworth). You see, Roarke/The Devil (Ciaran Hinds) wants to get his hands on the boy as part of an evil scheme. Danny's mother, Nadya (Violante Placido), is in the same boat as Blaze, as she also make a deal with the devil, ending up with a child. That's right, Danny is Roarke's son, and as Blaze so subtly puts it, Nadya is "the devil's baby mama."

Stocked with a dumb script (by Scott M. Gimple, Seth Hoffman, and David S. Goyer), laced with a tighter but half-cooked story and mostly lame one-liners, and uneven CG effects, "Ghost Rider: Spirit of Vengeance" might have rewarded us more fun with a hard R-rating. It surely knows how trashy it is, with enough cheese to pour on a plate of nachos, but that snack food would be more delicious than the movie at hand. To its credit, Neveldine and Taylor employ the same frenetic, in-your-face style of filmmaking (shooting scenes on rollerblades as the "roller dolly" technique) used in their off-the-handle "Crank" movies. They sure like their spastic edits. Whereas the first "Ghost Rider" was a more Hollywoodized comic book, this one is darker and grittier like a horror-tinged neo-grindhouse pic. Then again, whereas Neveldine and Taylor's "Crank" was a fast and fun no-brainer and "Crank 2: High Voltage" was ugly, bad-taste exploitation, their latest effort never cranks it into batshit-craziness. They should've gone big or gone home because an ambitiously ridiculous movie is more fun to watch than an aggressively dull one.

Considering the movie isn't trying to be a meditation on selling one's soul to the devil, it should be kind enough to deliver the awesome goods. The most gonzo moments, like a GWAR music-video, pop up in the Jekyll-and-Hyde scenes, Cage trying to tame The Rider and doing some hilariously cuckoo-bananas cackling and shrieking "You will tell me or I will eat your stinking soul," twirling his fiery chain, and driving like hell on his firey bike. And Johnny Blaze pissing out fire is amusing, but it's used as a throwaway. But as an actual film, the pacing is inconsistent, as the satanic hokum starts to be treated with a deadly-serious monotony and drags down all the fun that came before it. And once Blaze already has the boy, the story still has another 45 minutes to go, until getting a little more fun for the Big Confrontation in the last 10. Apart from Neveldine/Taylor's weird, stylish flourishes—a rip-roaring climactic chase along a desert road has some cool shots of cars tumbling and The Rider badassing around with his skull aflame—the movie suffers from a sheer lack of imagination. When a bad guy gets run over, Blaze quips "road kill." Really? Even the Eastern European locations feel uninspired.

With his serious, Oscar-winning work in "Leaving Las Vegas" and nomination for "Adaptation." long behind him, Nicolas Cage has turned his career into a joke, having the worst output of paycheck movies. Think about it; there was "The Wicker Man," "Bangkok Dangerous," "Season of the Witch," and now this. He doesn't take himself seriously, so why should we? All that said, Cage at least works his nutso hambone, devouring this role with a cheerful insanity, but the novelty is certainly wearing thin. Elba is appealing enough, with a silly Pepé Le Pew accent, but an actor of his talent still deserves better, as does Hinds, who got stuck playing the Wicked One. A minus away from being on the same level as its equally junky precursor, "Ghost Rider: Spirit of Vengeance" isn't without moments of so-bad-it's-good entertainment value, but it's hardly good. Let's put it this way; it's no "Drive Angry," a thoroughly entertaining B-movie that just went for it and delivered a good time, loony Nic Cage performance and all.