New to DVD/Blu-ray: Foolish "A Thousand Words" should've advised to 'make like a tree and leave' 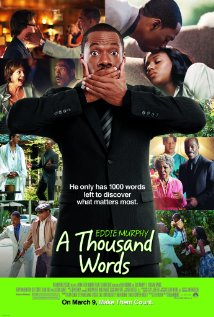 Oh, how Eddie Murphy has fallen. Earning himself an Oscar nomination for his dramatic work in 2006's "Dreamgirls" seems like a distant memory or possibly a dream, especially since Murphy followed it up with 2007's head-splittingly unfunny disaster that was "Norbit." However, the once-dangerously funny comedian seemed to be making a comeback in last year's breezily enjoyable "Tower Heist." Now, he's gone and done "A Thousand Words," which has re-teamed the star with "Norbit" director Brian Robbins. While there was no other direction to go but up for 2008's genial but dopey "Meet Dave," Robbins and Murphy are back to the bottom. How's this for a concept? In what doesn't even sound feasible on paper, a very verbal comedian like Murphy, whose mouth is his best asset, is forced to keep his trap shut and mime for most of this broad comedy. That's as wise of a move had someone forced Ludwig van Beethoven to play masterful music with stumps for hands.

Greedy, motormouthed literary agent Jack McCall (Eddie Murphy) constantly B.S.es his way through life, using his dishonest words to get what he wants. He's the kind of guy that cuts to the front of the line at Starbucks by faking a phone call that his wife is in labor…with twins. Jack is (apparently) such a jerk that even though he's given his wife Caroline (Kerry Washington) and their toddler son a modern-chic Los Angeles pad, she nags him about moving into a safer, fenced-in family home. At work, Jack never actually reads a manuscript, leaving that up to his assistant (Clark Duke), but Jack is convinced he can seal the deal with a revered holistic healer named Dr. Sinja (Cliff Curtis), who has written a book that Jack doesn't realize is only five pages long. When Jack makes a joke of Sinja's spiritual meditation, a fully grown Bodhi tree sprouts up in his backyard. According to Sinja, Jack is connected with the tree, so for every word he speaks (or writes down), a leaf falls. But when the tree loses all thousand of its leaves, it will die, as will Jack. (If only.) Can Jack charade his way to redemption?

As written by Steve Koren (responsible for the dreadful Adam Sandler vehicle "Jack and Jill"), "A Thousand Words" shoots itself in the foot, being rarely funny or as touching as it hopes to be. The fact that this "high-concept" comedy was shot in 2008 and has been collecting dust bunnies on the shelf is dubious enough, but seeing Nicolas Cage given a producing credit and not-so-timely shout-outs to Hannah Montana, Britney Spears, and the Chili's Baby Back Ribs ad are additional grounds for said claim. This mystical premise had potential to work, and played more successfully when it was called "Liar Liar" and starred Jim Carrey, but it becomes such a labored, strenuously wacky joke. If Jack only had a Keurig coffee maker at home, he wouldn't have to make a trip to Starbucks every day, but since the script and product placement demanded so, he has a hell of a time ordering a triple latte as a mute. (In the first shot of a scene, the camera actually pulls back from shamelessly zeroing in on the coffee franchise's label and a pre-mute Murphy shouting "This coffee is incredible!") Then when a blind man (John Witherspoon) asks Jack to tell him when to cross the street, would-be hilarity ensues with busy traffic. This scene sadly evokes memories of 1999's far superior "Bowfinger," where Murphy walked through traffic. And when Jack's gardener sprays the tree with water and then insecticide, Jack sweats and then gets high on the fumes (backed with the musical cues of Afroman's "Because I Got High"). If none of this sounds outrageously funny already, rest assured none of the other gags will have you erupting into laughter.

Back to phoning in his performances as a workaholic in need of smelling the roses, Eddie Murphy gets to ham, grimace, and mug as if his career depended on it. He tries his darndest, but the character of Jack experiences such a dark plight that the film might have worked had it played to Murphy's dramatic strengths. Swigging from a vodka bottle and yelling at the tree don't count. Then there's the squandered supporting cast whose characters are portrayed wholesale as foolish idiots. Hoping to spice up their marriage, Caroline gets a hotel room and surprises Jack in a dominatrix bikini, but it's just one more waste of the lovely Kerry Washington when she's not nagging him. And how exactly does she not notice a fully grown tree in plain-view? Clark Duke, as Jack's assistant Aaron, gets to act like a lewd jackass when he does all the talking for Jack at an important deal-closing luncheon; Jack McBrayer has only to play a dim-witted barista at Starbucks; and the usually hilarious Allison Janney gets to be uptight, playing Jack's boss, and have a breadstick shoved up her nose. Only the wonderful Ruby Dee, as Jack's senile mother, keeps most of her dignity intact, all "cajones" and "virgin" jokes aside. She seems to be acting in a better, more sincere film.

The final nail in the coffin is the third-act turn of sappy, cornball sentimentality that "A Thousand Words" takes. Not only does such heart-tugging emotion not feel genuinely earned, it seems to come from an entirely different movie. Director Robbins employs softly-lit, groan-inducing flashback scenes and pushy grace notes on the soundtrack, but it's all a forced, disingenuous attempt to make us feel something and get choked up. Naturally, Jack learns something from all of his lying and pent-up Daddy Issues. We know he's a changed man because he's even written a book called "A Thousand Words" (like the title of the movie!). But Murphy deserves funnier and so do we. Instead, give this simplistic, hopelessly flat inanity the silent treatment and re-watch "48 Hrs.," "Trading Places," "Beverly Hills Cop," "Coming to America," and "Bowfinger." Then buy a Starbucks afterwards!